With 500 detentions in one week, opposition growing to protest bylaw 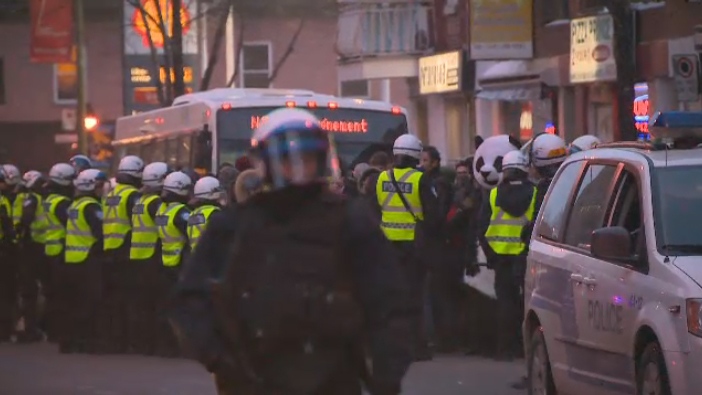 A furry mascot known as Anarchopanda was arrested at Friday's protest.

MONTREAL—With Quebec’s most radical student group vowing to continue demonstrations this spring, opposition is growing to a controversial municipal bylaw that led to the detention and ticketing of 500 protesters in one week.

On Saturday morning, provincial opposition party Quebec Solidaire decried the use of bylaw P-6 the evening before by the Montreal police. The controversial bylaw, approved by city council last May, bans masks during demonstrations and requires protest organizers to provide a route to police

During a protest on Friday, nearly 200 of an estimated 300 participants were detained and corralled for hours before being given $637 tickets.

The protest was held one year after tens of thousands marched through the streets of Montreal in a show of force that many considered the start of a “Maple Spring” of student unrest.

Manon Masse, a defeated candidate for Quebec Solidaire in Montreal’s east end, called on the government to “restore the right to protest.”

One of the first acts of the Parti Quebecois once in power last September was to revoke Bill 78, a province-wide law passed by the Liberals that mimicked many of the powers given to Montreal police by P-6. The party has taken no steps against P-6.

When reached by The Canadian Press on Saturday, a spokesperson for Public Security Minister Stephane Bergeron explained that Friday’s arrests were “normal” considering no route was provided. Bergeron was unavailable for comment.

“More than 200 were detained under a municipal bylaw for refusing to give their route,” announced Montreal police Commander Ian Lafreniere on Friday. “It started at 6 p.m. and honestly it ended 10 minutes later. No mischief, no one was injured, no damage. We are happy with the results.”

On May 16, 2012, the Quebec Bar announced that P-6’s requirement to provide a route to police could place an unlawful restriction on the freedom to peaceful assembly provided by Article 2.C of the Canadian Charter of Rights and Freedoms.

During Friday’s protest, the Montreal police announced that the gathering was illegal and that P-6 would be applied before the assembled demonstrators even left Emilie-Gamelin Park—a standard gathering place during last year’s student protests.

“When they were still at the park the person in charge of that protest, on the police side, went to meet them. He knows them, he’s the commander of station 21 and he’s been there for a long time,” explained Lafreniere.

“He got in contact with them and said, ‘Share your route, share your itinerary and this will be legal.’ Over the speaker he told them that he’d be happy to receive any itinerary. Unfortunately, you saw the results.”

Referring to some of the protesters in the crowd as “good customers” of the police, Lafreniere said the decision by the protest to leave the park and to march against traffic on de Maisonneuve Blvd. was a “no go” and that police decided to stop the protest at that time, a block from where it had started.

The police spokesman reiterated that the force had warned consistently for two weeks that the department’s “rule of the game” now required an itinerary.

Following the protest, legal blogger Veronique Robert wrote in the weekly Voir that the use of P-6 by the police was “alarming and frightening.” She called on the police to look into the conflict between the bylaw and protesters’ legal rights.

On April 6, the members of l'Association pour une solidarite syndicale etudiante, known simply as ASSE, are expected to meet in Quebec City and vote on the next stage of the student protests. A protest against P-6 is expected to be on the agenda.

—with files from The Canadian Press.