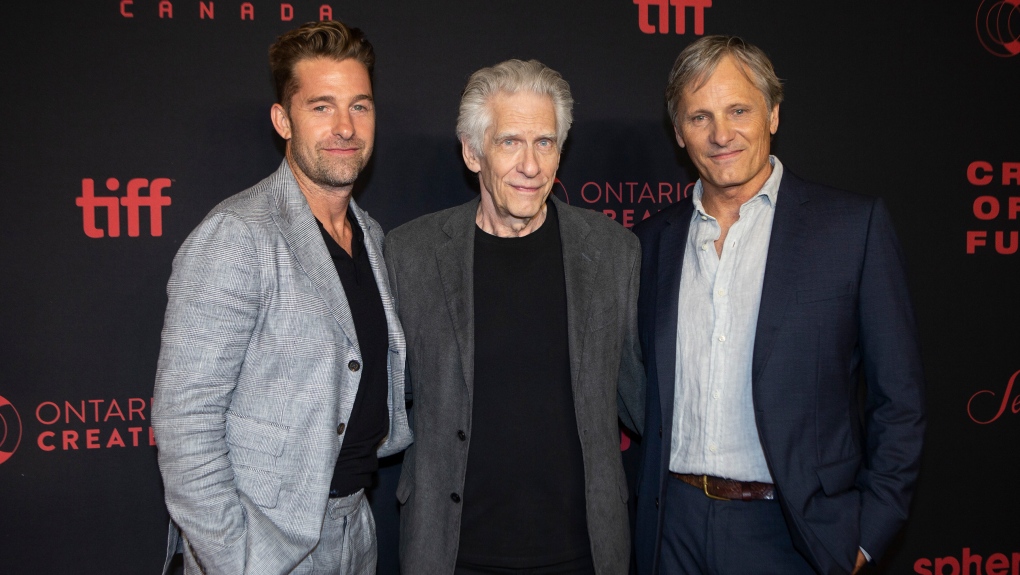 Director David Cronenberg, centre, stands on the red carpet with actors Viggo Mortensen, right, and Scott Speedman, for the North American premiere of "Crimes of the Future", in Toronto, Monday, May 30, 2022. THE CANADIAN PRESS/Chris Young

The King of Gondor paid tribute to the last king of the Habs 70s dynasty this week at a movie premiere.

Academy Award-nominated actor Viggo Mortensen showed off and showed up in a signed Guy Lafleur jersey at the premiere of his new David Cronenberg film "Crimes of the Future."

Mortensen is a noted Habs fan, with rumours swirling that he wore a Canadiens' t-shirt under his armour while filming the Lord of the Rings trilogy. Mortensen introduced Lafleur to a crowd at a Habs home game during the team's 100th anniversary season in 2009.

"When I moved up to northern New York in 1970, we didn’t have Internet or cable TV," he said at the time. "I would listen to Canadiens games on Radio-Canada, which is actually how I started learning French; watching Montreal play in the early ‘70s is when I really started to learn about hockey. My favorite player was always Guy Lafleur."

Mortensen said he wore his Habs jersey while filming Cronenberg's "A History of Violence," which caused him to take a fair amount of heat from the Toronto-based crew from where Conenberg hails.

It was filmed in France, Canada, the U.K. and Greece.

Canadian flags hang alongside those of the French and British on the streets of Dieppe, France, each August as the city marks the anniversary of an important and disastrous day during the Second World War.