The possibility of a high-frequency rail project between Quebec City and Toronto is getting a boost thanks to a $71-million feasibility study announced in Trois-Rivieres Tuesday.

The rail project would involve building dedicated tracks along the Toronto-Ottawa-Montreal-Quebec City corridor, purchasing new trains and providing a high-frequency service. Connections would also be made to Peterborough, Ont., and Dorion and Trois-Rivieres in Quebec.

Some of the money will fund work to make sure Via trains can easily move between any new dedicated tracks and local transit systems in Montreal and Toronto. For Montreal, that includes running Via trains along the REM electric-rail system currently under construction.

The goal is a more modern and commercially successful rail service, and encouraging commuters to leave their cars at home to reduce vehicle emissions and result in less highway traffic.

The funding, $55 million of which will be provided by the Canada Infrastructure Bank with $16 million from Transport Canada, will aid in explorations on several fronts, including environmental and financial, said federal Transportation Minister Marc Garneau.

“We are now committing to do the next phase – which is a critical one – which is to look at the environmental assessment over the 850 kilometres between Quebec City and Toronto, to consult with Indigenous people along that track to look at the acquisition of the lands that will be necessary and to do a financial evaluation of the final costs of this project,” said federal Transportation Minister Marc Garneau. 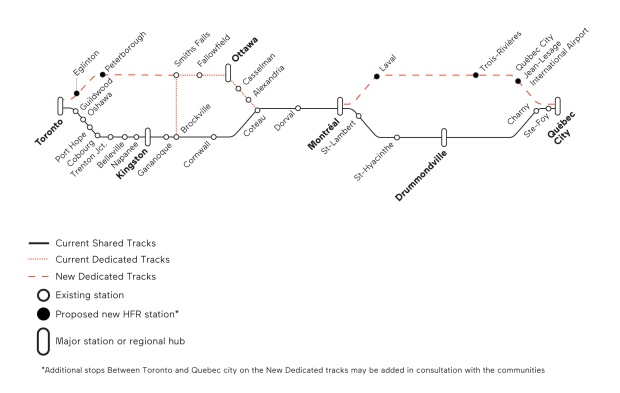 The high-frequency rail project is expected to cost $4 billion. Via Rail is currently looking into the possibility of private investment to help cover the costs.

"It is seen as an option. We have participated in a round of market-sounding with potential investors who have shown strong interest," said Pierre Lavallee, chief executive of the Canada Infrastructure Bank.

"There's interest and there's a very real need for more detailed information, which is what we're going to be developing," he said.

"We're obviously working in that direction and we're hopeful it all works out to develop a great project for Canadians."

Preliminary studies were encouraging, indicating that people would take the train and that private investors and the marketplace are interested in the project, said Garneau.

There is some consensus among partisan actors that the project could reduce greenhouse-gas emissions and boost regional economies, though NDP transportation critic Robert Aubin, who represents the Trois-Rivieres riding, said people are disappointed that the government didn't announce the start of construction, but rather another study.

A transportation advocacy group said the risks for the project are lower now that Via Rail has focused on existing corridors and rights-of-way, meaning work could be done by 2022.

"The largest risk, which we feel the government needs to pay more attention to, is the escalating opportunity cost to Canada of falling further behind the rest of the world on this vital aspect of our transportation infrastructure," the group Transport Action Canada said in a statement.

"Infrequent and inadequate inter-city rail service both is a constraint on our domestic economic growth and a deterrent to international investors."

-  With files from Jordan Press of The Canadian Press