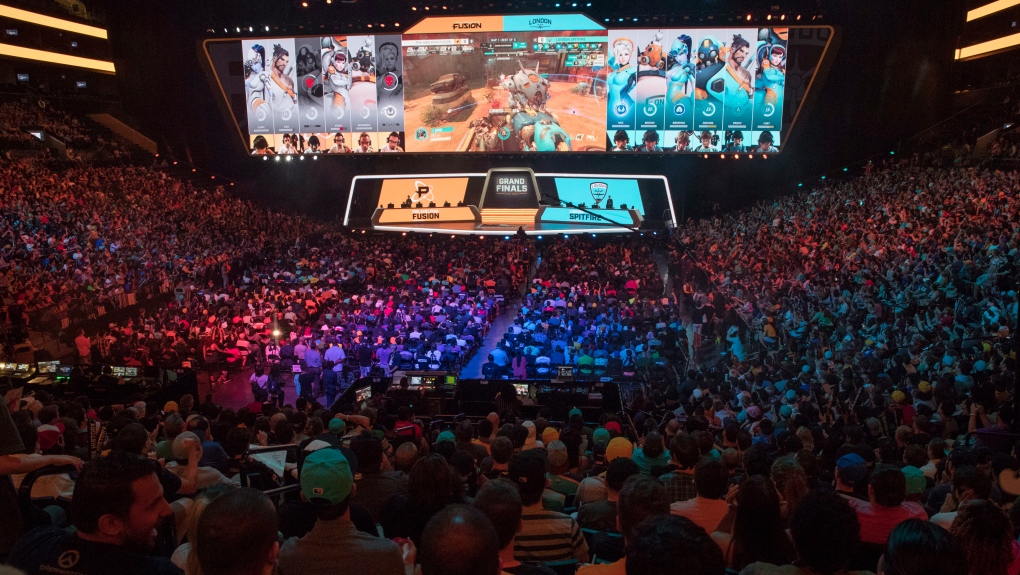 FILE - In this July 28, 2018, file photo, fans watch the competition between Philadelphia Fusion and London Spitfire during the Overwatch League Grand Finals competition at Barclays Center in the Brooklyn borough of New York. With eight new franchises and plans to take its regular season on the road for the first time, the Overwatch League is opening its second year a few steps closer to its goal of becoming a truly global, city-based esports league. (AP Photo/Mary Altaffer, File)

The Toronto Defiant's Overwatch academy team will be known as the Montreal Rebellion.

The Montreal feeder team will play in the Overwatch Contenders League.

The squad will be housed in Montreal, which the Defiant says will be the first official pro-esports gaming house in Quebec history. It will serve as a living and training facility for players and coaches.

The Rebellion are owned by OverActive Media, the Defiant's parent company, with Quebec's Mirage Electronic Sport helping run the academy side.

"We are so excited at the diverse backgrounds and player skill sets we have already assembled for our new Rebellion team, and since our players live and will be playing in Canada, we want to be a model for the future generations of Canadian esports athletes," Yannick Babin, president of Mirage Electronic Sport, said in a statement.

MSE was founded in 2017 to help take esports athletes to a professional level.

The Defiant rallied to defeat the Houston Outlaws 3-2 last Friday in the Canadian expansion franchise's opening match in the Overwatch League. The Vancouver Titans, the other Canadian entry in the 20-team league, blanked the Shanghai Dragon 4-0 in their opener Saturday.

The Contenders League has regional circuits in North America, Australia, China, South Korea, Pacific and South America. It is at the top of the pathway for players looking to rise up the ranks and make it to the Overwatch League.

Games will be broadcasted online in both English and French.

The Rebellion logo consists of a bird, which the team says represents "freedom depicted by its liberating flight." The general shape of the bird "subtly creates an 'M' shaped negative space, to create a connection with Montreal."

Add the Fleur-de-lis and the logo creates "a unifying message for Canada's newest esports franchise: a rebellion of esports athletes with a strong sense of belonging and identity."

"Partnering with Yannick and his team to launch the Rebellion continues our real commitment to growing the Overwatch community and esports nationwide," OverActive president and CEO Chris Overholt said.

"Our aim here is to expand our Toronto Defiant fan base into Quebec and across Eastern Canada and create a viable pipeline to the pros for Canadian players."