Toronto Blue Jays to bring baseball back to Montreal

Ten years after the Montreal Expos packed up and left for Washington, the Olympic Stadium will play host to the boys of summer once more.

The Toronto Blue Jays will be in town Friday and Saturday night, facing off against the New York Mets in two exhibition games.

And the games are only two of many baseball-related activities planned in the city over the next few days.

It’s all part of an effort to possibly, maybe, one day get a baseball team back in Montreal.

“We wanted to create kind of festival of baseball. We wanted to do a celebration of baseball because baseball means a lot for people from Quebec,” said Simon Arsenault of Evenko, the event promoter that helped bring the games to town.

Legendary Expo Gary Carter will be honoured and there will be a celebration of the 1994 Expos – the incarnation of Nos Amours that had the best chance of winning it all, before a strike brought the season to a premature close.

Though the games aren’t sold out, more than 80,000 tickets have been sold so far, prompting talk of making the Jays in Montreal an annual event.

“We'll see if the players like the field. If the stadium holds up well field-wise and if we think it's worthwhile we would definitely consider coming back,” said Howard Starkman, the Jays’ VP of special projects.

Rapper and Expos fan Annakin Slayd said he would love to see professional baseball make a return to Montreal.

“It's great to see that Evenko and the Blue Jays (are) recognizing that we had a good time here once and we have dreams of getting it back again,” he said.

And though many people, including Warren Cromartie, former Expo and founder of the Montreal Baseball Project, would love to see a team in this city, there are significant barriers to that happening. The team would need billions of dollars in investments, part of which would need to go toward building a new stadium.

According to The Canadian Press, Montreal Mayor Denis Coderre will throw the ceremonial first pitch at Friday night’s game.

Coderre has been cautiously involved in the process of getting a baseball team back in this city.

The mayor also plans to meet with John McHale Jr., an executive with Major League Baseball, who will be in Montreal watching the games.

But for now, the city’s baseball fans can be content that baseball is back in town, albeit for a brief period of time.

Standing on the field at the Big O for the first time and seeing “Montreal” being painted, Expos logo-style, behind home plate, Slayd allowed himself to dream, just a little.

“I feel like we're going to see the Expos coming out on the field . . . Friday night.” 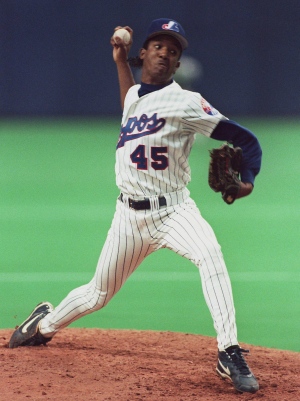 Take a trip through memory lane