Warning: this article contains a photo some may find disturbing

A Halloween decoration installed outside a Montreal home is sparking debate about how far is too far, with some critics saying it crosses the line between scary and distasteful.

Located in Montreal's Ahuntsic neighbourhood, the decoration consists of a human-shaped dummy strung up in a tree by the neck, a blood-stained pillowcase over its head. Duct tape is wrapped around the dummy's ankles, knees, waist and torso, with a string of fairy lights entwined around its form.

Debate ensued after a photo of the installation was shared to a local Facebook group called Montreal Then and Now.

"Horrible," "inappropriate," and "in bad taste" were some of the words used by commenters to describe what they saw.

"I think people are upset because it looks so freakin' real," one commenter summarizes.

Many said the decoration's allusions to suicide and lynching hit too close to home, while others expressed concern for children who might be unwittingly exposed to graphic imagery while passing by. 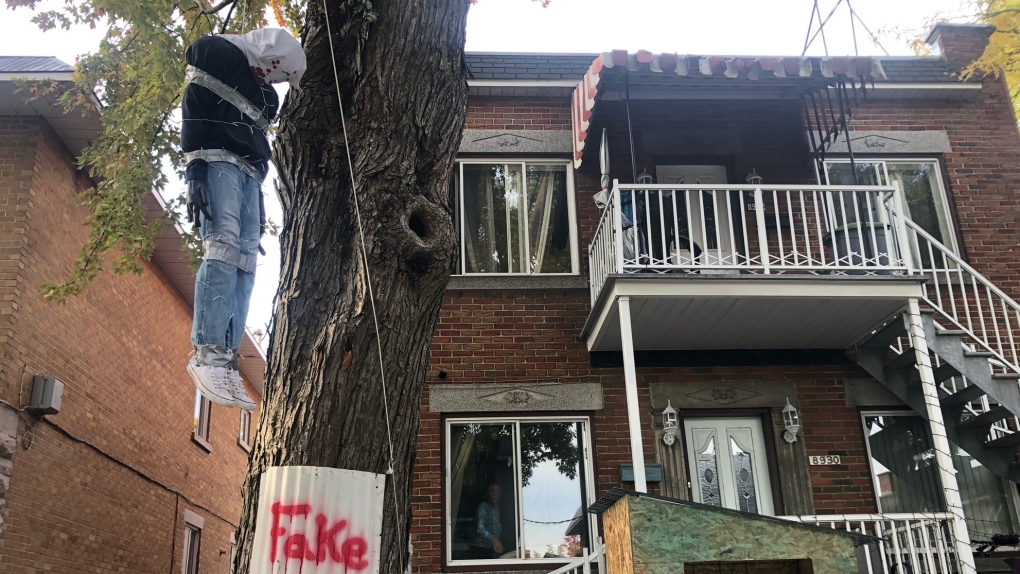 Speaking to CTV News on Wednesday, homeowner Matthew Farah, who installed the decoration, gave no indication that it would be taken down. He said local police officers visited his home, and as a result, he added a sign to the display reading "fake."

"It’s fake. It has nothing to do with any suicides. It’s just decoration. It’s clearly fake. I don't know how you can’t tell," said Farah.

The image was met with more criticism on Twitter.

Some IDIOT in Montreal put up a WAY TOO REALISTIC hanging body as a Halloween decoration.

It prompted 911 calls and denunciations from neighbours and suicide prevention associations. pic.twitter.com/DZemgcAyq3

Others, however, accused the critics of lacking a sense of humour.

"People really miss sense of art and humor. It's Halloween, it is supposed to be spooky, weird AND disturbing," one comment reads.

LISTEN ON CJAD 800 RADIO: Mathew Farah, Montrealer whose Halloween decoration is causing controversy, on his display

'UNFAIR TO THE PUBLIC': PSYCHOLOGIST

Dr. Perry Adler is a clinical psychologist at the Jewish General Hospital.

He told CTV News he's most concerned by the realistic nature of the installation and how it could impact passersby.

"I understand that Halloween, part of the fun of it is that we're supposed to have a little bit of anxiety or fear related to ghosts and goblins and ghoulish things, but usually the images represented are caricatures -- people know that it's fake. This one's so realistic," Adler explained.

He said the decoration risks bringing up deep, painful memories for those touched by topics like suicide and lynching.

For example, one woman who came across the decoration walking in the neighbourhood told CTV News her husband died by suicidal hanging.

"It's unfair, I think, to the public," Adler said, adding that in his view, putting up a sign that reads "fake" isn't enough.

"I think that it would be very appropriate to take such a thing down."