Pope Francis should provide a substantive reconciliation plan to the Catholic church during his visit to Canada, according to Cree Nation Grand Chief Mandy Gull-Masty, the Quebec delegate present during the pope's residential school apology in April.

The pope will visit two Quebec locations over the course of two days during his late July visit, including holding a massive open-air Mass on the Plains of Abraham in Quebec City.

It’s a follow-up to that April apology, which was largely unexpected. Indigenous Peoples had been asking the church to recognize its role in residential schools for years.

"For him to come to Canada, my first and foremost hopes are that he is aware of what is required from him," Gull-Masty told CTV News, "and for him to have an understanding and awareness of what he is asking of Indigenous Peoples."

To fulfill those hopes, Pope Francis will need to lay out a clear reconciliation plan.

"We made our statements very clear when we visited the pope," she said, speaking of her time working with other Indigenous delegates in Rome.

"The real work," she said, "is going to be the tone that he sets within the Catholic Church and the expectations in moving forward and working with Indigenous Peoples."

The Quebec portion of his visit is one of three stops, with the other two being in the Edmonton area and a much briefer stop in Iqaluit.

In Quebec, the Pope will have two major public appearances, with one of them being developed "with Indigenous and community partners."

Reconciliation is a theme of the overall visit, as the Pope meets with Indigenous leaders and a visit to a former residential school in Alberta.

However, the Quebec portion of the visit will include just one relatively short meeting with local Indigenous leaders, which is being described not as Quebec Indigenous leaders but those from "Eastern Canada."

Pope Francis is scheduled to arrive in Quebec City, from Edmonton, on July 27.

Pope Francis will notably not be visiting Kamloops, B.C., where 215 unmarked graves were located near a former residential school there.

The discovery ushered in what has been regarded as a worldwide reckoning of the brutality of residential schools.

Gull-Masty said she wasn’t sure why Kamloops was left out of the pope’s itinerary.

"We had, on a number of occasions, indicated to the pope, and in our statements in the press in written format, that we had wished to see him go to Kamloops," she said.

"I do honestly feel it would have been the ideal location for Indigenous groups across Canada, and Canadians, to identify with the history." 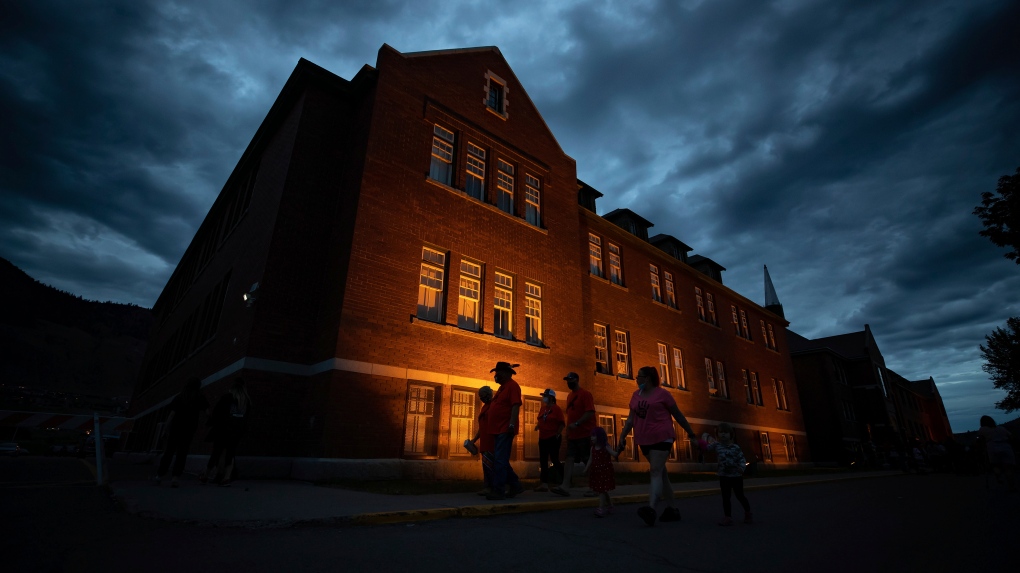 People walk past the former Kamloops Indian Residential School after gathering to honor the 215 children whose remains have been discovered buried near the facility, in Kamloops, British Columbia, on Monday, May 31, 2021. (Darryl Dyck/The Canadian Press via AP, File)

The first thing on the itinerary in Quebec is to visit La Citadelle in Quebec City for "private meetings" and a public address.

The public is asked to participate by going to a dedicated zone on the Plains of Abraham, where there will be large screens set up to see the proceedings and "opportunities on July 27 and 28 for Indigenous cultural expression."

The next day, the 28th, the Pope will travel about half an hour north of Quebec City, to the small town of Ste-Anne-de-Beaupré.

There, "he will celebrate Mass at one of the oldest and most popular pilgrimage sites in North America," said the news release from the Canadian Conference of Catholic Bishops.

Ste-Anne has a small church that became famous over the centuries for supposedly being the site of miracles, and drawing pilgrims who wanted to be healed.

"There is a church dedicated to Saint Anne in which Our Lord is working great marvels in favour of the holy mother of the Most Blessed Virgin Mary," wrote Marie de l'incarnation in 1665 about the church, according to the website for the Sainte-Anne Sanctuary.

"There, the paralytics walk, the blind can see, and the sick are healed of every kind of illness."

Sainte-Anne is also the patron saint of Quebec.

On the day of Pope Francis' visit, organizers expect between 10,000 and 15,000 people will arrive in the small town to watch his mass at the church, whether they end up watching from inside or outside.

Later that day, he will meet with bishops, priests and other local Catholic leaders.

He'll then retire to rest, but in his absence, representatives of the Catholic Bishops of Canada will have dinner with Indigenous leaders from Eastern Canada, with the focus "on friendship and ongoing dialogue."

The next morning, the 29th, he'll have a private meeting with the Jesuits, his own religious order, before spending time with Indigenous leaders from Eastern Canada.

He'll leave immediately after that for Iqaluit, just for the afternoon, before flying back to Rome in the early evening.