The Engels Angle: Back to Work, Habs Have no Choice This Week 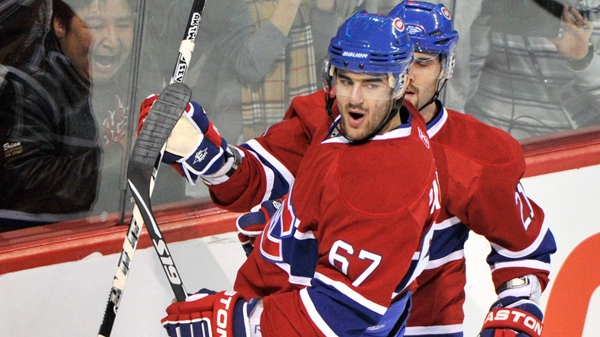 MONTREAL - It's getting harder and harder to deny that the loss of Max Pacioretty has set this team back dramatically.

They don't have a single player that offers the aggressive style of Pacioretty. The only ones they can lean on to do similar things are Andrei Kostitsyn and Benoit Pouliot, and though the former has offered something closer to what Pacioretty brings, the latter has never shown he's capable of doing so.

Lars Eller is a nice player, playing with certain amount of confidence you may have not though we'd see from him this year after the first sixty games offered more than hard lessons to the young Danish talent.

But Lars, with his confidence and play-making ability, doesn't have Pacioretty's nose for the net.

Cammalleri, Gionta, Plekanec and Gomez; these guys understand that they won't have any success playing from the perimeter.

All of them lack the size to do what Pacioretty was doing for the Canadiens, but none of them should lack the will.

And that's why this three-game shutout skid is an embarrassment.

The Canadiens are a team stocked with veterans, many of them with Stanley Cup experience.

They didn't gain that experience by watching the game go by, as opposed to implicating themselves to lead.

And for all those fans looking at Kostitsyn, Pouliot, Eller and Desharnais to do what the top guns were hired for, I can promise you the results won't be favourable if the Canadiens need to rely on that.

It's never solely about production, and perhaps that's why I've refrained from calling out certain players on the Canadiens this season.

But to a degree, unless Gionta gets back on team-leading, goal-scoring pace, they'll find it from somewhere else. And as we've been through, they don't have many alternatives.

Unless Mike Cammalleri finds some sort of determination to get to the gritty areas of the ice, his struggles will continue.

His lack of production is beyond troubling; it's a clear indication that he's not competing to the level we're accustomed to seeing from him.

Don't blame the injuries, even if he has a couple. And forget about blaming Martin's system, which had Cammalleri producing on career-pace last season before his injury, and had him produce the most goals ever scored by a Hab in a playoff run.

Forget about the individuals, and throw all the excuses to the wind.

This team has no choice but to compete to the level that we're customarily seeing from the teams that recently beat up on them.

They're running out of race track to re-establish themselves. And no, this isn't the time to reinvent the wheel either.

This is crunch time, and if it means these banged-up Canadiens suffer a few more bruises, that may be the only way they make a steady return towards maintaining their dignity.

To think this week's action could be more boring than last week's (Atlanta, Carolina, Jersey) is nauseating. But it won't be nearly as bad if the Canadiens score a few goals and manage wins.

At this stage, the Atlanta game becomes much more important than it seems. With a win, they put Carolina in a beyond-desperate situation come the following night. With a loss, they give Carolina all the hope in the world that they can make it a four-team race for the final couple of playoff spots.

No rest for Carey Price, and enough rest for his Canadiens. The message was clear at practice yesterday: Time to get back to work!