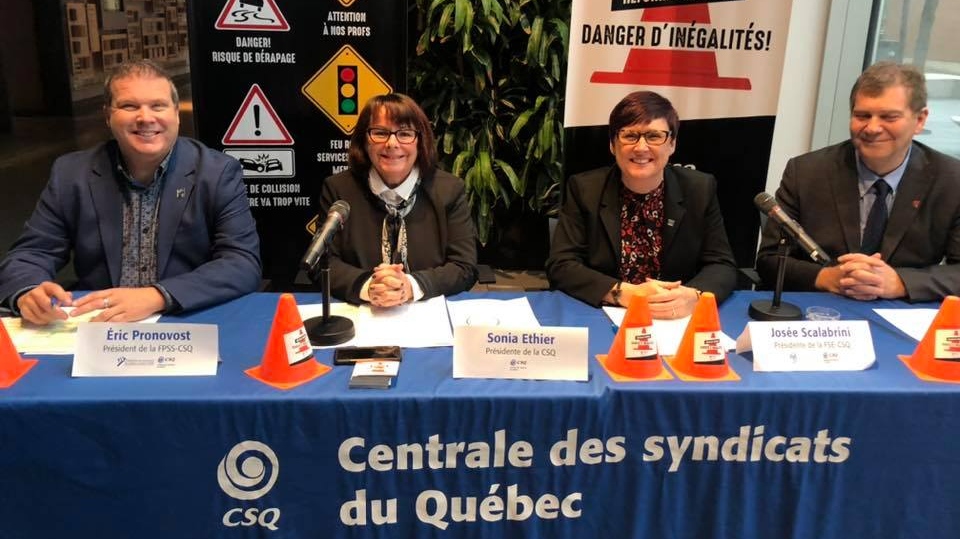 MONTREAL -- La Centrale des syndicats du Quebec (CSQ), of which 125,000 union members are education staff, is calling for numerous amendments to the Minister of Education and Higher Education's bill on the reform of the school system. The CSQ fears increasing inequalities in services between schools and denounced what it called a direct attack against teachers.

CSQ President Sonia Éthier compared Minister Jean-Francois Roberge's method to that of former Liberal Health Minister Gaetan Barrette. She reproached him for having forwarded his imposing reforms without any preliminary consultation with teachers.

"It is a lack of respect for those who are in the schools not to have been consulted," she said at a press conference Sunday.

The CSQ will present a total of 14 recommendations in the parliamentary committee on Monday, plus nine other recommendations made by la Fédération des syndicats de l'enseignement (FSE), which is affiliated with the CSQ.

What the union fears most is the educational haggling philosophy that supports school system reform. Allowing parents to enrol their child in the school of their choice will result in competition between schools and the emergence of a "school à la carte" system that the union denounces.

"It is feared that it will destabilize the very foundation of public school and that it will accelerate the inequalities of opportunity because we know that it is not the children from disadvantaged backgrounds who will have this opportunity," said Éthier.

"We will empty schools, and this will create instability of staff, instead of taking care of each of our schools, '' added the president of la Fédération du personnel de soutien scolaire (FPSS) Éric Pronovost.

For the FSE, it is the interference of the professional autonomy of the teachers that its president Josée Scalabrini denounces.

The union attacked the sections of Bill 40 that allow the manipulation of students' grades, imposes training on teachers without taking into account their particular needs, and which weakens the representation of teachers on the governing boards.

"Teachers no longer want to feel like performers. They want to be part of the decisions. The bill brings us even closer to becoming performers than people who are part of the solutions," said Scalabrini.

Éthier wonders what the real motivations are behind Minister Roberge's decision not to consult the education professionals before starting his reform.

"When will we stop once and for all to think together about the education system we want in Quebec? It is not too late for the minister to correct the situation and to hear the concerns of the various stakeholders in the network," said Éthier, who presented her union's many recommendations as a hand extended to the government.

Bill 40 (An Act to amend mainly the Education Act with regard to school organization and governance) was tabled on Oct. 1. Public hearings before the Committee on Culture and Education, to express views on the bill, begin Monday and will continue until mid-November.

This report by The Canadian Press was first published Nov. 3, 2019.