Fortin was relentlessly bullied at school and last seen in the town of Alma, Que.

That morning, he pleaded with his mother to drive him to school so he would avoid getting bullied on the bus.

He walked to the bus stop and never returned.

“We always forced him to go to school because he needed an education,” said Eric Fortin, David’s father. “Maybe that was our mistake. Maybe we should have kept him home to save him from what he was facing at school.”

The SQ searched the area for weeks and his parents handed out flyers.

Still, no one could find David.

His disappearance marked the first time that many members of the general public witnessed the real pain that bullying victims face.

“It showed that kids aren’t just running away for the fun of it or rebelling against their parents or authority,” said Pina Arcamone of the Missing Children’s Network. “He was really trying to get away from a serious problem. He had sought help and help wasn’t coming fast enough. David could have been anybody’s child.”

It also showed the negative effects of incessant teasing.

“When a child is bullied it’s not only the child who is suffering, it’s the family and community,” said Jasmin Roy, an anti-bullying advocate.

The Missing Children’s Network received over a thousand tips related to David’s case, with many coming from outside of Quebec.

The Fortin family helped investigate many of those leads but were left disappointed each and every time.

“There are so many versions of where he could be,” said Eric Fortin. “Reports of seeing David in British Columbia, in Montreal, in Ontario.”

On the 10-year anniversary of his disappearance, David’s mother, Caroline Lachance, has written a letter in the hope that he will see it.

She wonders how much time it will take before she can see him again and is desperately asking where he is.

It ends with her saying that she still hopes to hold him in her arms and know that he’s home.

“We’ll keep waiting for you my love.” 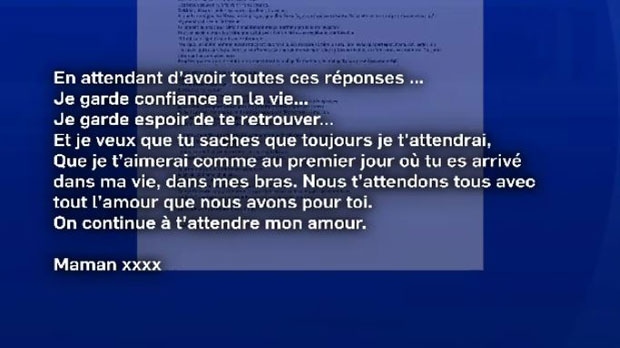