In 2003, 14-year-old Ghyslain Raza was working with a video camera in his high school class and, frustrated at not being able to solve a problem, stepped in front of the lens and had some fun.

After classmates got ahold of the tape and uploaded it to the Internet, Raza's life and online pop culture were never the same.

The "Star Wars Kid" video was viewed hundreds of millions of times, parodied on series such as Arrested Development, South Park and The Colbert Report and Raza and his family's lives became the centre of a media circus from local newspapers to The New York Times.

"There is an element of surrealism in all of this," Raza told CTV News in his first English interview. "I used to watch Arrested Development before it became a plot point in the storyline. When you see this come up on screen and it's clearly about you and you didn't know it would happen, it's surreal." 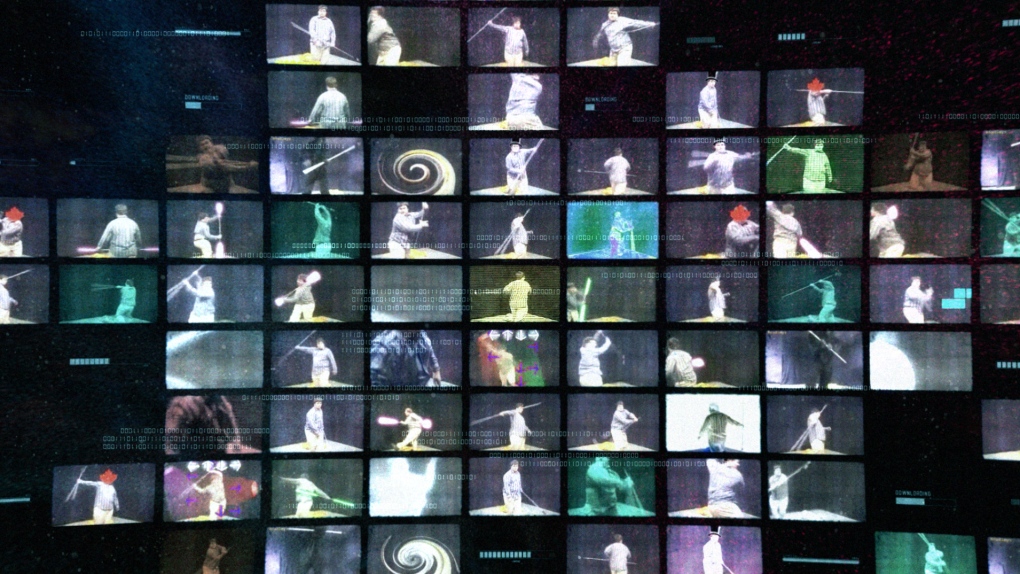 The 'Star Wars Kid' became an internet sensation and sparked years of harassment and legal battles for a teenager who decided to have fun with a video camera. SOURCE: NFB

Raza has never spoken publicly about what happened to him, the harassment he faced or details about his family's legal suit against his classmates and the media until now.

His story is the centrepiece of Mathieu Fournier's documentary "Star Wars Kid: The Rise of Digital Shadow" which goes live on the NFB's website Thursday.

The documentary began when Fournier and Jonathan Trudel approached Raza about using his story as a starting point of their project that goes well beyond Raza or his family's story.

"I would not have been interested in a documentary strictly focused on what happened to me or take a melodramatic tone," said Raza, who was never a Star Wars fan. "To go beyond the story, to go into reflection, to make something useful out of it, that's what convinced me that it would be a good project to be a part of."

In the documentary, Fournier wanted to show the man Gaza has become who the director described as curious and sensible with a great sense of humour.

"From the start, it seemed crucial to me that the documentary would allow us to bring to the forefront the man he has become today," he said. "He gave himself up with humanity and truth. In a very natural way, he got involved humanly and intellectually in all the meetings we had with him, in Canada and in the United States."

The documentary examines how the video wound up on the Internet, became the first viral video and what effect it has had on Raza and his family. At the same time, it examines the broader online culture, social media and the world ruled by the geeks.

In the documentary, Raza speaks to teens at his former school, who talk about constantly being on or near their phones and on social media well aware of their online presence.

"To hear them talk about it surprised me," said Raza, adding that he was hopeful to see that they have a much greater awareness of themselves and their online shadow.

"That's something that brings hope for the future that they already have such an awareness of consent, perhaps even empathy. I think that's a very good thing to be able to see," he said. 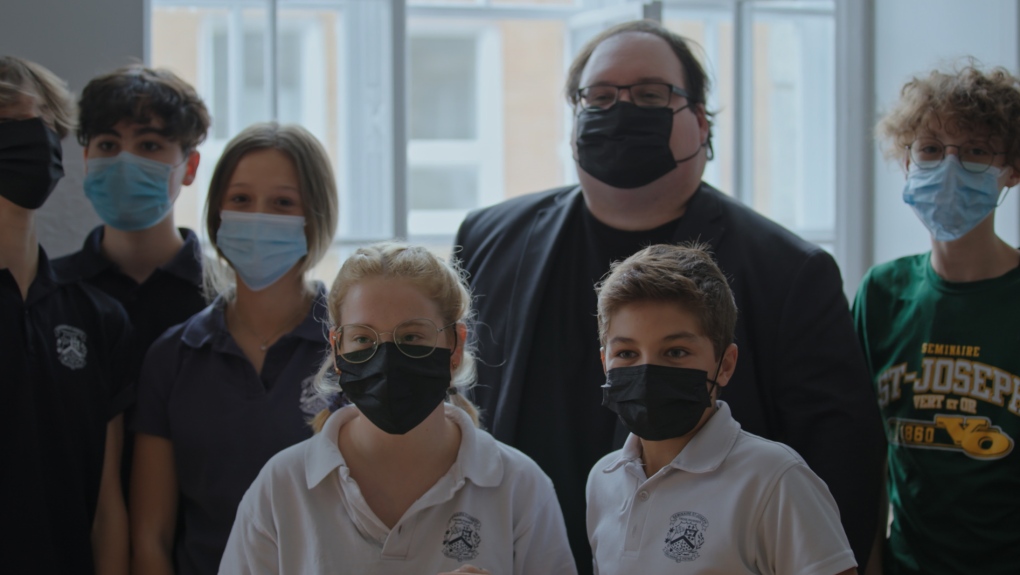 Ghyslain Raza went to the same school in Trois-Rivieres that he attended and made the infamous 'Star Wars Kid' video one evening in 2003. SOURCE: NFB

Throughout the doc and in person, Raza is even-keeled and introspective.

He is not bitter, even though, as he says in the documentary, he would be afforded privacy rights if he were a juvenile offender, but not as a victim of harassment due to his online video.

"Ultimately, I'm not bitter and I hope today we can have a discussion that's useful," he said.

Andy Baio posted the video on his site in 2003 and came up with the nickname "Star Wars Kid."

He says in the documentary multiple times that he regrets what he did and the potential harm it caused to Raza.

"If I knew what I know now, I never would have posted it," said Baio in the film. "I can't diminish it. I provided a place for people to watch it in that initial spread. I have enormous regret about posting the video."

Raza understands that it is not Baio's fault that the video became what it did, calling him an empathetic person who simply erred in judgment.

"In the documentary, you can tell how much of a good person he is, how empathetic he is and that provides a beautiful lesson of humanity that a good person can make a mistake and that mistake can have very important consequences but that, at the end of the day, Andy could be like any one of us," said Raza. "That's part of self-awareness, today we know that you have to be careful even if you're in the spur of the moment. With these technologies, the consequences are quickly amplified." 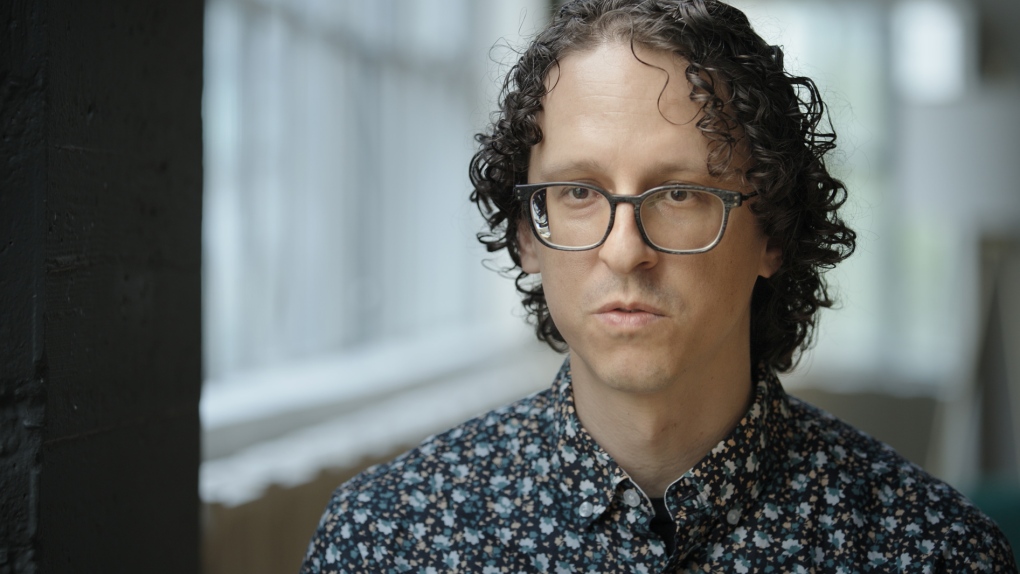 Andy Baio is deeply apologetic to Ghyslain Raza for uploading and naming the 'Star Wars Kid' video in 2003. He had no idea the reaction it would get. SOURCE: NFB

His lawyer Francois Vigeant, rather, criticizes the adults involved in the circus for their lack of introspection and empathy.

"People are insensitive to drama that doesn't involve them," he said.

Fournier said he wanted the documentary to question online behaviour and target issues such as loss of control over our image and the impact of digital shadows on everyday lives.

"The Star Wars Kid video changed Ghyslain Raza's life forever," said Fournier. "In my opinion, this story leads us to reflect on how we now use images, on social media, to give meaning to our existence, to tell our own story... But when we lose control of this 'narrative', as was the case for Ghyslain in 2003, a harmful image of ourselves can hijack the course of our lives."

Raza said he was able to accept what happened to him early and not let it define him. He is pursuing a doctorate in law at Queen's University after completing an undergraduate and master's degree at McGill.

"You don't have to accept to be defined by something like that," Raza responded. "I may have a digital shadow that's perhaps a little bit larger than most, but everyone these days has a digital shadow, and when it comes to identity - online versus reality - this brings new issues we didn't have 20 years ago. At the end of the day it's about not accepting to be defined by something like that."