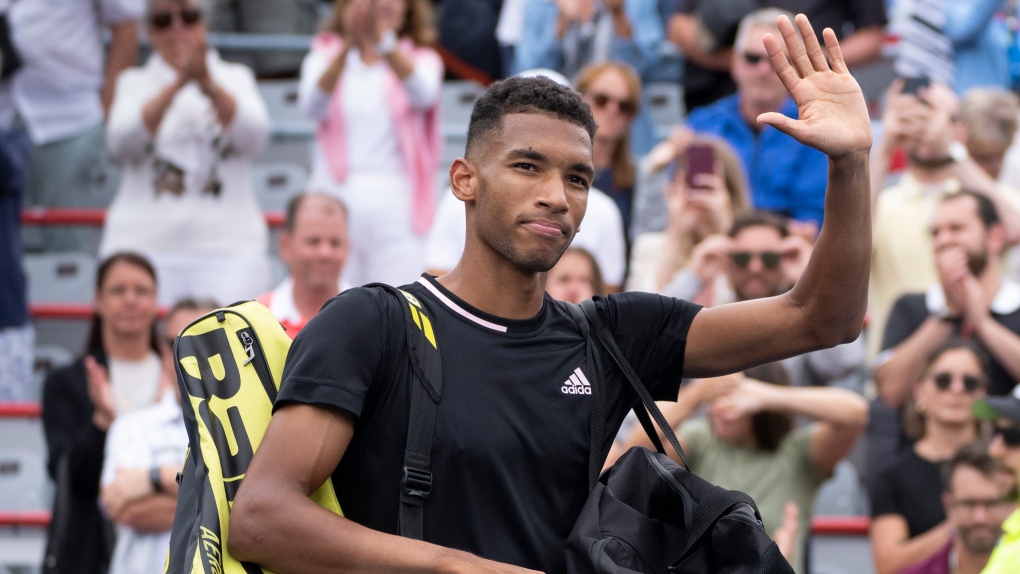 Canada's Felix Auger-Aliassime walks off the court after losing to Casper Ruud of Norway for his win in quarterfinal play at the National Bank Open tennis tournament, Friday, August 12, 2022 in Montreal. THE CANADIAN PRESS/Paul Chiasson

Canada's Felix Auger-Aliassime is out of the National Bank Open after dropping a 6-1, 6-2 decision to Norway's Casper Ruud in quarterfinal play Friday at IGA Stadium.

The Montrealer was the last remaining Canadian in the ATP Tour event.

Auger-Aliassime entered play without dropping a set this week but came out flat on an overcast afternoon. Ruud wrapped up the first set in a brisk 36 minutes and didn't let up from there to the disappointment of the partisan crowd.

Auger-Aliassime couldn't get on track despite vocal support from the near-capacity crowd. He was shanking more shots than usual and unforced errors seemed to come at the worst times.

Ruud was clinical in his attack and kept the pressure on his opponent. Auger-Aliassime seemed to always be on his heels and forced to play defence against the consistent Norwegian.

The Canadian gave up two quick breaks in the second set before finally holding serve to get to 1-4. Ruud completed the win in 74 minutes.

Auger-Aliassime was hoping to become the first Canadian to reach the semifinals at this event since Denis Shapovalov in 2017.

Earlier, Hurkacz took advantage of two double-faults by Kyrgios early in the third set for the first service break of their match. He rolled from there to end the Australian's nine-match winning streak.

"Nick is a super opponent, he can make every single shot," Hurkacz said. "He doesn't really have that many weaknesses, if any. I was just trying to serve (well) and stay aggressive."

There was no wasted energy from Kyrgios, who played like he had a cab waiting outside.

He'd usually bounce the ball once and go right into his service motion. The pace of play agreed with Hurkacz, a six-foot-five right-hander who matched the Australian's power game.

Both players had break opportunities but tiebreakers were needed to settle the first two sets.

Kyrgios, who dispatched defending champion and world No. 1 Daniil Medvedev in the second round, slowed in the third set and his serve lost some of its zip.

"I'm not a machine, I'm a human," Kyrgios said. "My knees were sore, my back was sore, my abdominal (area) was sore. I was trying to stay moving, but I just stiffened up."

Kyrgios entered play with wins in 15 of his last 16 matches, with the only defeat coming to Novak Djokovic in last month's Wimbledon final.

The semifinals are set for Saturday and the final of the US$6.57-million Masters 1000 tournament goes Sunday.

Hockey Canada's board chairs to answer to feds, Nicholson deferred to later date

Hockey Canada's board chairs, past and present, will answer to the federal government today on the hockey body's handling of alleged sexual assaults and how money was paid out in lawsuits.

Quebec Premier Francois Legault and the CAQ win a majority government, Prime Minister Justin Trudeau will take the stand in the Emergencies Act inquiry, and North Korea fires a missile over Japan. Here's what you need to know to start your day.