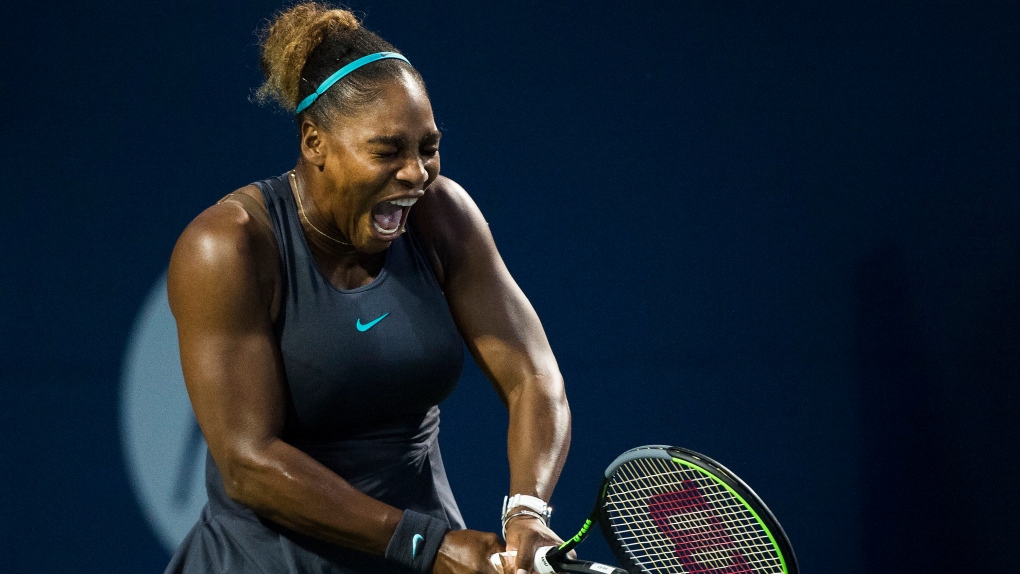 Serena Williams of the United States reacts after winning a rally as she plays against Ekaterina Alexandrova of Russia during the round of 16 at the Rogers Cup tennis tournament action in Toronto on Thursday, August 8, 2019. THE CANADIAN PRESS/Nathan Denette

He learned the sport there and recalls taking the bus up to York University as a kid to watch world-class matches every summer.

But after he turned pro, there was something special when his journey took him to Quebec.

"We all know that the (Rogers Cup) tournament is better in Montreal," Nestor said. "Most of the players would admit this."

Perhaps privately, but certainly not publicly. And especially not while the event is going on.

"Don't put me in that position," men's world No. 2 Rafael Nadal, who has won the Rogers Cup twice in both Montreal and Toronto, said with a cheeky smile. "Honestly, both are great for me. Difficult for me to say one or another."

"(The) atmosphere in Montreal or (Toronto) is always amazing," added women's No. 7 Elina Svitolina, winner of the 2017 tournament and a semifinalist last year. "With all the fans and how many people are coming and watching and supporting ... (it's) something amazing in Canada."

To many observers, however, there's a stark difference between the crowds.

Fans in Toronto often seem more subdued, while those in Montreal can border on rowdy -- just ask world No. 8 Karen Khachanov. The fiery Russian swatted a ball out of IGA Stadium in frustration during his third-round victory over local product Felix Auger-Aliassime on Thursday because some supporters were cheering his mistakes and attempting to distract him during play.

They responded with loud boos after he sent a ball on a one-way ticket out of IGA Stadium, which alternates hosting the concurrent men's and women's Rogers Cup brackets with Toronto's Aviva Centre every summer.

Denis Shapovalov went on a memorable run two years ago in Montreal that saw him beat Nadal on the way to making the semifinals. The Richmond Hill, Ont., product said the 2018 event in Toronto was great, but there's something unique about Montreal.

"Montreal is a very special crowd," said Shapovalov, who lost in the second round this year. "It's got to be one of the best tournaments and one of the best fan bases in the world. They're very knowledgeable. They know what's going on. I feel like they're playing every point with me.

While Toronto's venue is in the city's extreme north end, making for a more difficult commute, Montreal's is central and has historically been easier to access. Toronto recently extended one of its subway lines close to Aviva Centre -- where the upper deck is closed for the women's event -- while Montreal's IGA Stadium has had metro stops close by for decades.

"The proximity to downtown really makes it a lot more special as far as atmosphere," Nestor said of Montreal's venue. "It's a great event compared to all the tournaments throughout the year."

Tennis Canada president and CEO Michael Downey said getting Toronto's subway up to York will be a game-changer for the Rogers Cup in the coming years.

"When people understand it's a 30-minute ride to take in world-class tennis, it's going to broaden it to a bigger audience," he said.

Asked about the difference in atmosphere between the tennis crowds, Montreal tournament director Eugene Lapierre offered a little grin.

"I've heard that. It's tough to put a finger on," he said. "It's almost a cultural difference. Montrealers really picked up this event and make it what it is. It's a major event here. When tennis comes to Montreal, everybody wants to go.

"Tennis has grown tremendously in popularity in Quebec. Reports tell us it's the second sport people watch and follow after hockey."

"I think our fans are great."

Like any other sport involving Toronto and Montreal, Lapierre said there's a friendly rivalry between the two organizing teams.

"They're my colleagues and we have a lot of fun," he said. "We know both tournaments have different strengths and different weaknesses."

Nestor, a 91-time doubles winner on the ATP Tour, said one of the reasons Montreal might be more engaged is because Canadian men have historically done better at the event than in Toronto. There was Shapovalov's run two years ago, and Milos Raonic's march to the 2013 final that included a match in the semis against countryman Vasek Pospisil.

"The courts always seemed to be a little bit faster," Nestor said. "That might have attributed to the success of guys like Vasek, Milos, and now guys like Felix and Denis."

In the end, Downey said there's nothing wrong with different types of fan engagement at the Rogers Cup, which officials call "the engine" of the sport in Canada when it comes to funding at both grassroots and high-performance levels.

"I just look at it as it's part of our country. We celebrate things differently."