Rizzuto gets Catholic funeral, but church has in past denied mobsters' funerals 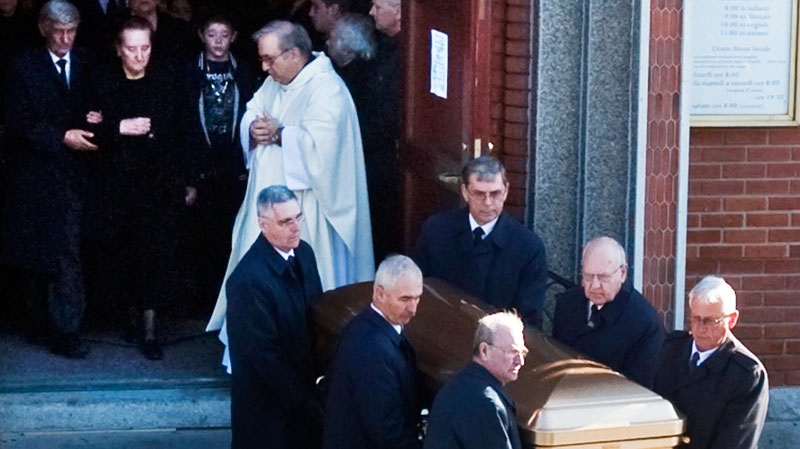 Libertina Rizzuto follows the casket of her husband, Nicolo, from the church after funeral services for reputed organized crime boss Nick Rizzuto, in Montreal on Monday, Nov. 15, 2010. (Ryan Remiorz / THE CANADIAN PRESS)

MONTREAL - It's been a dicey dilemma for Catholic leaders in the past: to agree, or not to agree, to provide a church funeral for a well-known criminal.

Nicolo Rizzuto, a reputed Mafia don, was given a Roman Catholic funeral today in Montreal.

But the church has occasionally denied such rites to Rizzuto's counterparts in the past.

One Catholicism expert says that under the church's Code of Canon Law, the Rizzutos could also have been denied a funeral ceremony.

McGill University professor Daniel Cere says the church's code of conduct states that "manifest sinners" cannot be given a funeral mass if it would result in public scandal of the faithful.

In the past, the church has decided against holding Catholic funerals for other mob leaders -- including John Gotti and Paul Castellano.

Rizzuto was convicted of several crimes, including gangsterism, and his clan is suspected of killing many rivals over the years.

But he was never convicted of murder.

Cere says the church tends to have a loose interpretation of the funeral guidelines unless the person has formally repudiated the Catholic faith.

He says the church has been reluctant to spark debates over whether someone has a right to a funeral mass.

Cere says the decision whether to grant a funeral ceremony is determined by the local bishop.