Researchers note that whales are staying in the St. Lawrence River for less time

Researchers note that whales are staying in the St. Lawrence River for less time 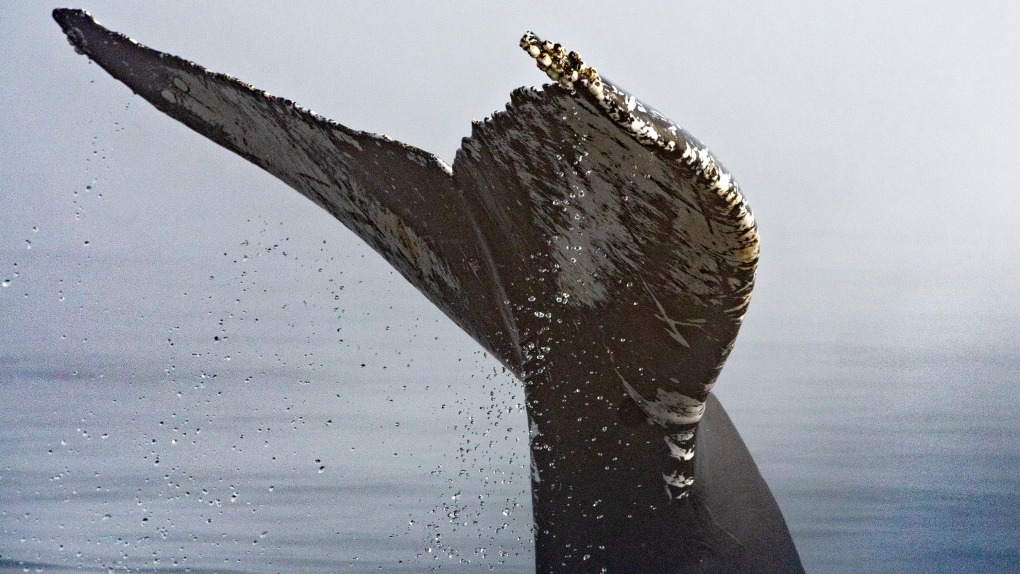 The tail of a humpback whale comes out in the morning fog, on the Saint-Lawrence river in Tadoussac Que., Tuesday, Aug. 11, 2020. Tadoussac is filled with whale-watching tourists from the province and from Ontario as Covid-19 keeps them from going south. THE CANADIAN PRESS/Jacques Boissinot

Several experts note that the number of whales observed this summer on both sides of the St. Lawrence River is low, even though the observation season is not over.

Specialists working out of the Group for Research and Education on Marine Mammals (GREMM) say in an article published on their site that the whales' behaviour has changed.

Tim Perrero, the person in charge of the GREMM's large whale census, said that the whales' stays in the estuary are "extremely short" compared to their usual habits. He said that several individuals who are seen often in the area at this location have only stayed for a week or even a few days.

This is the case of a humpback whale named Tic Tac Toe that has made several short visits to the area this season, whereas it usually stays for a long time.

In addition, fin whales that are normally faithful to the estuary have not yet been sighted. Perrero mentioned four identified whales that usually spend up to half the season in the area.

Parks Canada ecologist Samuel Turgeon noted the same thing. His data on the monitoring of whale-watching activities in the marine park suggests that these mammals are staying in the area less and exploring more.

The Mingan Island Cetacean Research Station (MICS) has noticed a decrease in the number of large whales visiting the Jacques-Cartier Strait for several years.

The situation is quite different for the Saguenay-St. Lawrence Marine Park, where the number of humpback whales and fin whales has exceeded the season averages since 2018.

"Even if the number of whales appears to be lower in the estuary, it is not particularly low this season if we compare it to the early 2010s," said Fisheries and Oceans Canada biologist Véronique Lesage. "So far, seven fin whales have been identified in the estuary, a number similar to the totals recorded between 2014 and 2017. The number of humpback whales -- 37 sightings -- surpasses even previous years, with the exception of 2021."

In the Gaspé region, about 20 humpback whales and a few fin whales were seen at the beginning of the season, but since then their appearances have been rare. GREMM maintains that it is normal to see fewer whales in July than in June in this sector.

However, it is unusual to have a complete absence of blue whales and few fin whales.

The presence of whales has varied over the past few years, making it difficult to discern the causes of these changes in habits. Experts are considering the hypothesis of variations in the abundance of prey, since whales visit the St. Lawrence River mainly to feed.

In the Marine Park, for example, the Parks Canada team conducts censuses to detect the presence of prey. Preliminary data show that there are very few sandeels, a fish that whales feed on, contrary to previous years when such censuses were carried out.

Disturbances in the ecosystem, including warmer water and reduced ice cover, may be responsible for the changes in the amount of prey present in these waters.

This report by The Canadian Press was first published in French on Aug. 15, 2022.

Ontario education workers such as librarians, custodians and school administration staff have voted 96.5 per cent in favour of a strike.