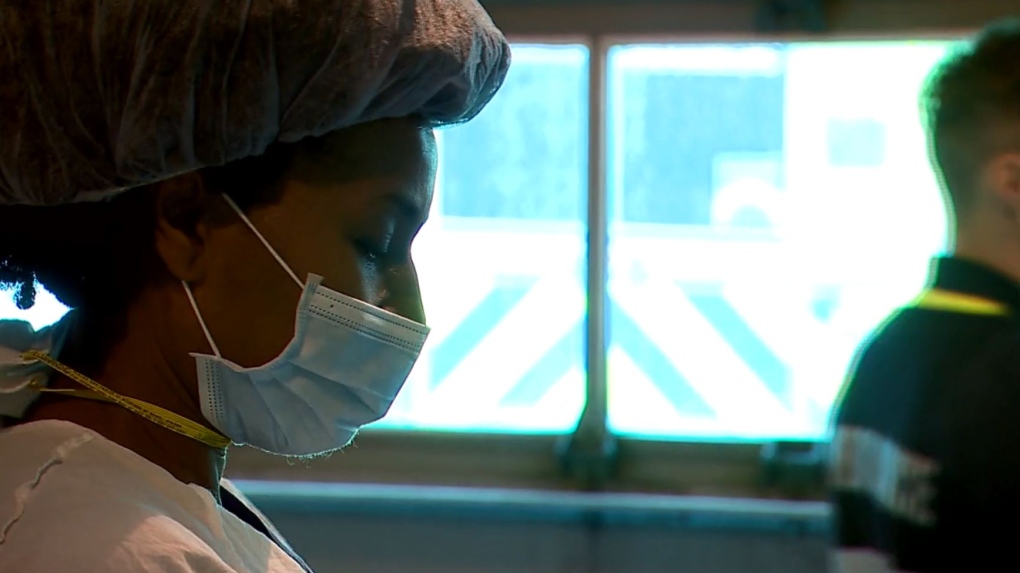 MONTREAL -- Quebec is pursuing yet another strategy to bolster its nursing ranks, which are dangerously understaffed.

It has put in place an agreement to allow foreign-trained nurses to pitch in, speeding up their authorization to do two COVID-related tasks, Quebec’s professional order of nurses has confirmed to CTV News.

The professional order will “offer them a process to obtain special authorization…in order to contribute to screening and vaccination against COVID-19,” said the order, known as the OIIQ.

By helping with vaccinations and testing, those nurses could free up more Quebec-trained nurses, who are fully certified, to go help in hospitals.

The OIIQ said this Tuesday that the agreement has been under discussion since September and was implemented last week. There should be more "data available" in the next two weeks, the organization said.

The professional order oversees the certification of all Quebec nurses, including the process—often a long one—by which foreign–trained nurses can integrate themselves into the province’s workforce.

The group is looking to recruit the emergency COVID-19 helpers by going through the four nursing schools that offer professional integration programs designed for this group.

The OIIQ sent an invitation email to all foreign-trained nurses who passed a certain stage of the credential recognition process, getting a nod from the Equivalence Committee, within the last four years, it said.

Quebec’s health ministry said in a statement last week that authorizing the workers is the prerogative of the OIIQ, but that it is eager to make use of some of this potential labour.

People from the ministry “are currently working in close collaboration with professional orders to mobilize the resources that may be available in the context of this pandemic,” said a spokesperson.

Last spring, with a dire labour shortage in long-term care homes, the province began a similar effort to get emergency authorization for foreign-trained nurses, not to work as nurses but as orderlies in the homes.

In the last few weeks, the province has also announced efforts to recruit 2,000 undergraduate nursing students into the hospitals, to ask doctors to help out, and to move nurses between regions of Quebec. Nurse staffing is much lower than it was in the spring, unions have said.

“All the help that we could get during this critical time is welcome,” said a spokesperson for FIQ, one of Quebec’s biggest nurses’ unions.

'QUALIFIED PEOPLE OUT THERE DOING NOTHING'

One foreign-trained nurse living in Montreal said it's been hard hearing stories of Quebec nurses burning out while she's stuck on the sidelines, but even the fast-track program won't tap much of the available nursing labour.

"There are a lot of qualified people out there doing nothing," said Reyjelen Canazares, 40.

Canazares worked for seven years as a general and surgical nurse in the Philippines, as well as managing a clinic, before moving to Canada.

She was admitted to Quebec in 2017 under the skilled-labour immigration stream, because of her nursing qualifications, but has been working in a warehouse ever since, still waiting to finish all the various exams and trainings, including French classes, she said.

She got a recent email from the OIIQ advising her of the new program, and said she would love to help in any capacity, but it appears from the email that she can't apply since she's not yet enrolled in the college-based program meant as a "bridge" between foreign and Canadian certification.

There are always people waiting to take the program, with demand especially high for the sole English-language program among the four options, and it involves an entrance exam that includes math skills that many nurses don't regularly use on the job.

She also wasn't sure if the applicants for the fast-tracked COVID-19 jobs would need to have passed their French exams, which can take years to train for.

But Canazares said she's been constantly reading the news of what Quebec nurses are enduring during COVID-19.

"That is my passion -- that is the work that I love to do best," Canazares said.