'Crying in their car': Montreal nurses, ready to 'crack,' welcome students to the front lines 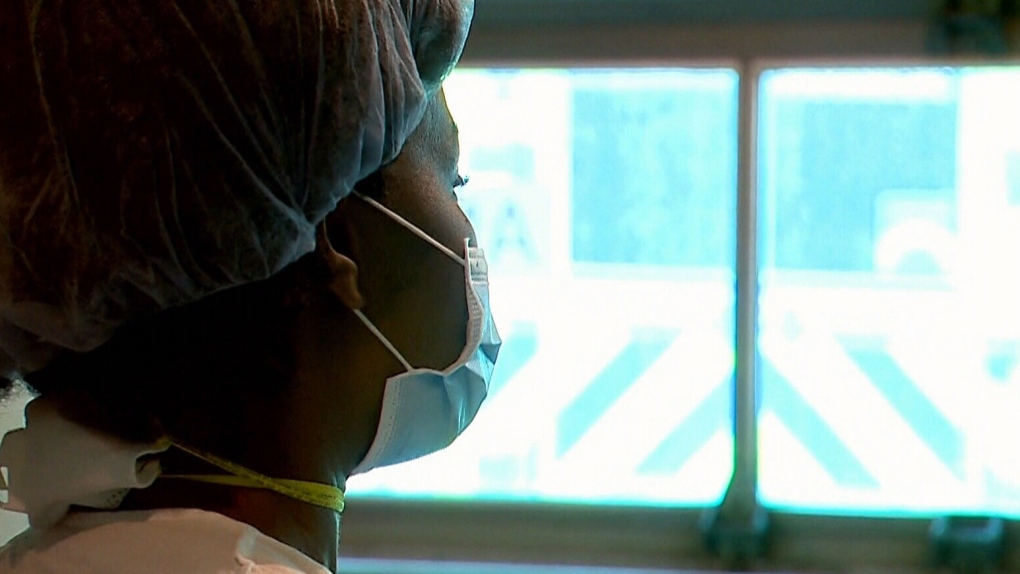 MONTREAL -- If anyone thought Quebec nurses’ unions would be annoyed that the government is asking 2,000 undergraduate students to work among them full-time this semester, without regular pay, they’d be wrong.

One major union says nurses are under very serious strain, with a dire need for help.

“Every day there’s people crying at work, crying in their car,” said Denyse Joseph, a vice-president at the FIQ union, which represents many of Montreal’s nurses.

“The union reps are telling us they’ve never seen it so bad with their members,” she told CTV.

“The pressure has increased drastically since the spring,” she said, and the biggest problem among nurses right now is “psychological illness.”

Joseph said her only concern with the new nursing students’ voluntary work program, in fact, is that it might be so upsetting that it makes them quit the field before even graduating.

“We want the government and the employers to make sure that they’re doing everything [so] that this experience will be positive for them, because we need them,” she said.

“We need them at work, we need them to finish their studies and come back into the workforce. We have to have a positive experience for them in order to get them back.”

Quebec authorities announced late last week they were creating a scholarship program designed to entice 2,000 nursing students to leave school for this semester, work full-time on the COVID-19 front lines, and get a bursary upon their return to university.

The money, up to $13,500, is taxable and works out to about $22.80 per hour for nearly four months of full-time work—not including overtime—if divided hourly rather than seen as a lump-sum scholarship.

Joseph praised the government for coming up with the idea.

“We’re very pleased with this program,” she said. “As long as it stays on a voluntary basis, this is great.”

For people working since the start of the pandemic, “it's going to come and support them and give them fresh air coming in—every [bit of] help is welcome.”

The eligible students are young but qualified, she said. They’ve already received their DEC college nursing certificate and are doing bachelor’s degrees, meaning they are already licenced. Many nurses enter the field with only a DEC.

A VICIOUS CYCLE OF SICK LEAVES AND RESIGNATIONS

The loss of staff is making the major difference between nurses’ stress level during the first wave and their stress now, she said. It has created a vicious cycle.

In September, the FIQ said that 1,700 Quebec nurses had already quit since March.

It’s unclear how many are currently off sick or on stress leave. In early December, Premier François Legault said that roughly 6,500 health-care staff were home from work, about a third of whom either had COVID-19 or were being tested for it.

“That means the pressure is extremely high, and at one point they have no choice—they just resign, or they just go off sick because they can no longer take it anymore.”

For the scholarship students, who will be picked on a first-come-first-served basis, it’s vital that the province thinks about this, even in the midst of crisis, she said.

There are some other things the government could look at doing to inject some emergency labour into the hospitals, she said, including drawing on private clinics. Many of the nurses that have quit this year amid the COVID-19 strain have actually just moved to the private system, she said.

Shortstaffing is not the only cause of strain. There are fears of the virus itself, with people “afraid of going back home and contaminating their family, and afraid of getting contaminated. Every day, we have that,” Joseph said.

WHY IS THE SECOND WAVE WORSE?

The workload is also bigger now because fewer non-COVID tests and procedures have been cancelled -- many surgeries, tests and other appointments are still happening -- compared to the spring when nearly everything was put on pause, Joseph said.

“The pressure is so high because you've been working since March in a tension,” she said.

You're “losing sleep… you're being forced to work longer hours,” with no chance of a day in off in lieu, she said.

“We're so short-staffed that we need everyone to be there every day, and extra hours every day.”

Finally, the practice of délestage, where the health-care network moves around staff to where they’re most needed, means nurses must often work with strangers, in “different environments” than what they’re used to, with no warning, Joseph explained.

“A lot of that increases the stress and makes you crack at one point.”

Are you a nurse working on Quebec's front lines? Please get in touch with us: selena.ross@bellmedia.ca