Quebec's spring budget includes a one-time payment of $500 to every adult earning $100,000 or less to help offset the impact of inflation, and the cash is scheduled to arrive a few months ahead of the provincial election.

The money will be transferred directly into Quebecers' bank accounts after they file their 2021 tax returns, Finance Minister Eric Girard told reporters Tuesday after tabling the budget for the 2022-23 fiscal year. It's his fourth and last budget before Quebecers head to the polls in October.

Girard insisted the payments aren't to curry votes and help his government win a second mandate but to help Quebecers weather significant inflation that the government expects will reach 4.7 per cent in 2022. Some 6.4 million Quebecers will receive the payment, at a total cost of $3.2 billion.

The effects of the COVID-19 pandemic, supply chain bottlenecks and the Russian invasion of Ukraine, he added, have helped created a general rise in prices that has been "higher and more durable than originally anticipated."

"The rise in gas prices is now; the rise in food prices is now," Girard said, justifying the government's decision to send payments to Quebecers instead of cutting income taxes. It's not appropriate, he added, to cut taxes "while we are in a structural deficit."

The Coalition Avenir Quebec government's budget projects a deficit this fiscal year of $6.5 billion -- $2 billion lower than forecast in last spring's budget. And while the operating deficit is projected to be $3 billion, that figure rises by $3.5 billion due to a payment into a fund dedicated to reducing the provincial debt -- a transfer required under Quebec law.

Girard says the province is expected to return to balanced budgets by the 2027-28 fiscal year. 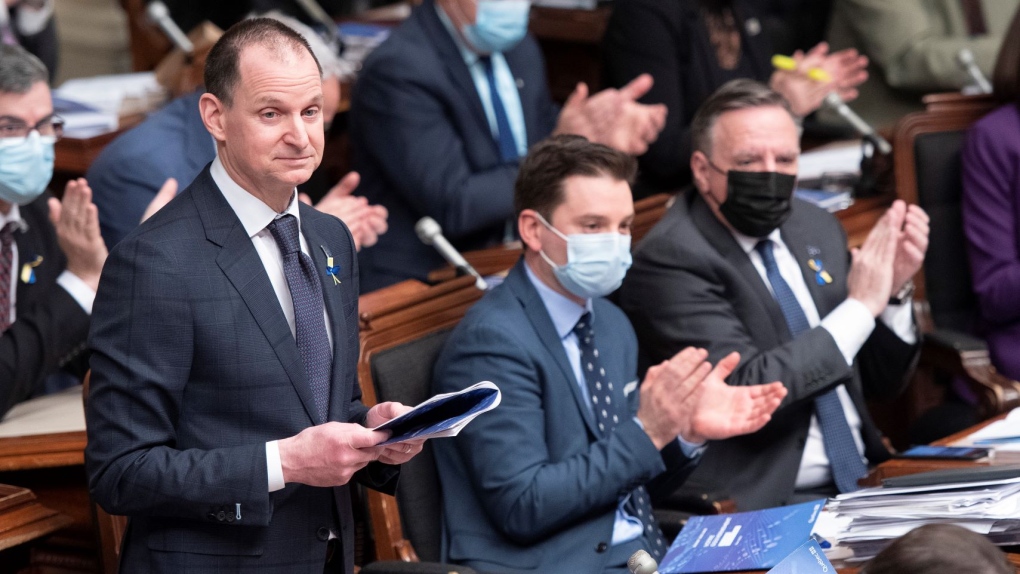 The budget comes in the wake of exceptional spending by the government to navigate the COVID-19 pandemic. It estimates the pandemic's financial impact on the province will reach a total of $18.3 billion by the 2024-25 fiscal year.

The budget for the coming fiscal year includes $3.7 billion of new spending, with programs aimed at restoring the health system after the pandemic and stimulating economic growth receiving the largest amounts.

Total new program spending is earmarked at $22 billion over five years, including $8.9 billion into the health system, $2.8 billion into education programs and $4.2 billion into programs to stimulate economic growth.

While Girard painted a rosy picture of the province's finances, he warned of economic uncertainly surrounding a potential resurgence of COVID-19, further disruption of supply chains, and the ongoing Russian invasion of Ukraine.

He said the budget includes "important contingencies" totalling $8.5 billion over the next five years that could be used on health or economic spending.

Quebec is likely to be affected by the war in Europe "to a lesser extent," according to the budget, because Ukraine only accounts for 0.3 per cent of the province's exports. But the war has helped raise the prices of oil and food, which will add to existing inflationary pressure.

The government says inflation in the province hit 5.1 per cent in January and 5.4 per cent in February, which it says justifies the direct payments to Quebecers.

But opposition parties came out strongly against the decision to redistribute billions into people's bank accounts, accusing it of trying to win votes.

Liberal finance critic Carlos Leitao said the budget "seems to have been structured to deliver a significant payment to over six million Quebecers just in time for the election. There seems to be no vision beyond that."

He suggested the government is bribing Quebecers with their own money, pointing to the fact the government collected over $3 billion more than anticipated in income taxes in the 2021-22 fiscal year.

"Quebecers are financing those cheques themselves," he said.

Quebec solidaire finance critic Ruba Ghazal criticized the government for failing to act to curb the "Wild West" of rising home prices, while co-spokesperson Manon Masse said the budget does little to address the climate crisis.

Revenues for this fiscal year are estimated to be $138.5 billion, a rise of 2.2 per cent, and Girard has budgeted spending increases of 6.3 per cent and 5.4 per cent for the health-care and school systems, respectively.

Quebec's gross debt, which includes debt on financial markets and money owed for civil servants' retirement plans, is estimated at $215.3 billion, or 43.1 per cent of GDP.

The province will receive $13.7 billion in equalization payments this fiscal year, an increase of 4.2 per cent.