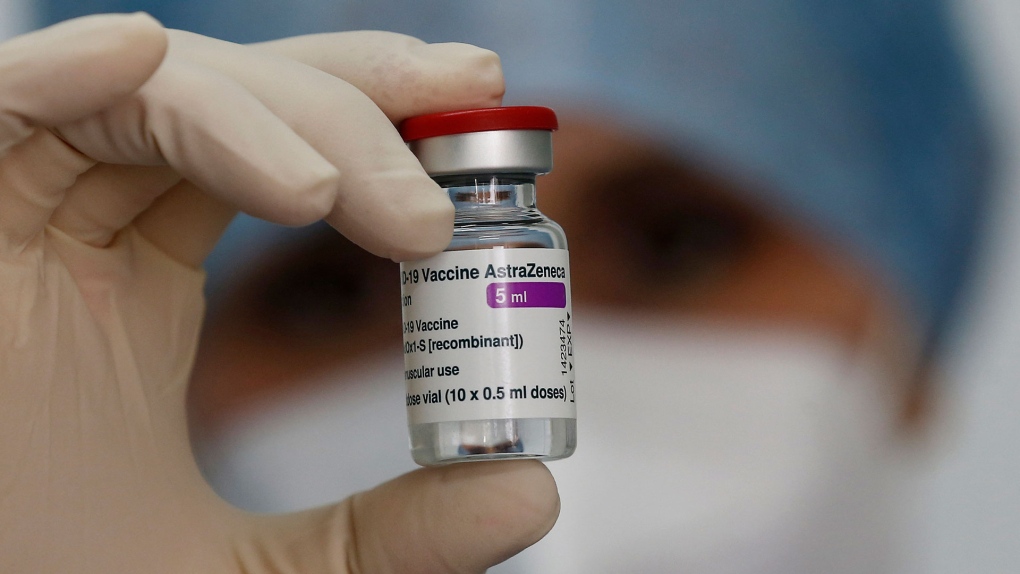 A health worker holds up a dose of the AstraZeneca vaccine against COVID-19 to be administered to members of the Italian Army at a vaccination center set up at the military barracks of Cecchignola, in Rome, Tuesday, Feb. 23, 2021. (Cecilia Fabiano/LaPresse via AP)

Since the start of the vaccination campaign, Quebec has identified eight cases of thrombosis with thrombocytopenia (TIPIV), which occurred after the administration of the AstraZeneca vaccine.

In a press release published Thursday evening, the province's health ministry said that "all these people have been taken care of by the health and social services network and have received the appropriate care."

The ministry also said that three of them are hospitalized, but there is no fear for their lives.

"The other person is currently recovering at his home and the evolution of his state of health is favourable," the statement read.

According to data from the ministry, cases of thrombosis linked to the AstraZeneca vaccine remain rare, or more specifically, approximately one in 100,000 vaccines administered as a first dose.

During the second dose, the ministry has assessed that the risk is much lower, it said -- around one case in a million.

In total, 500,000 doses of AstraZeneca (Covishield) vaccine have been administered in Quebec so far.

The ministry said it urges people who have gotten this vaccine to quickly consult a doctor or the provincial health line, Info-Santé, if, within four to 20 days after vaccination, the following symptoms appear: shortness of breath, chest pain, swelling of the legs or stomach pain, severe headache or headache that has lasted for a few days, blurred vision or skin bruising.

Quebec, which just received another 148,000 doses of AstraZeneca, has stopped using this vaccine for first doses.

The government said Thursday that the new deliveries will probably be reserved for second doses for Quebecers 45 and over, but it is not known when they will be available.

This report by The Canadian Press was first published May 20, 2021.