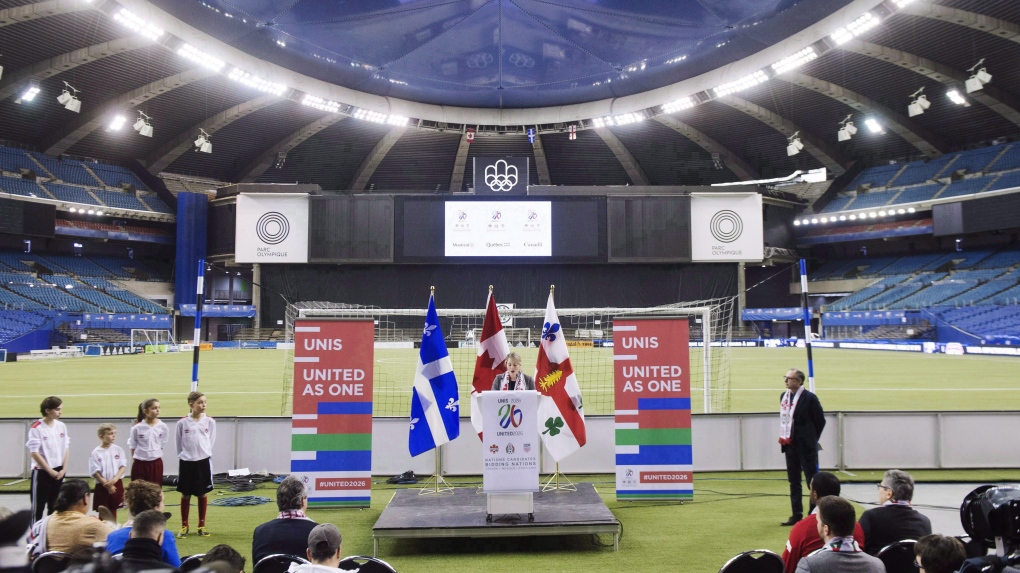 The group hoping to bring the 2026 World Cup to North America has defended its decision for a 60-10-10 split in games -- 60 in the U.S. and 10 each in Canada and Mexico. Heritage Minister Melanie Joly speak to the media during a press conference at Olympic Stadium, Friday, March 16, 2018 in Montreal. THE CANADIAN PRESS/Ryan Remiorz

MONTREAL -- If games at the 2026 World Cup are ever to be staged in Montreal, they will take place without one player's contribution at least.

The government of Quebec has decided not to financially support Montreal's bid to hold matches in the metropolis, citing, an "apprehended explosion of blows."

"We understand that the decision not to support the hosting of FIFA World Cup matches in 2026 may disappoint the City of Montreal and soccer fans," Proulx explained in an email. "We would have been happy and ready to support the hosting of the FIFA World Cup in Montreal, but the apprehended cost explosion of the event was becoming difficult for us to justify to Quebec taxpayers."

According to Proulx, in less than three years, the estimated costs for the Quebec government have doubled, from $50 million to $103 million.

"In the current context," adds Ms. Proulx, "we consider that the priority remains to support Quebecers and businesses in times of pandemic and towards economic recovery.

"That said, let's be very clear," she continued. "We continue to support the City of Montreal, in particular through investments specifically dedicated to tourism revival and by staying on the lookout for major events that will be win-wins for all parties."

The decision was sent to the City of Montreal on January 15, in a letter.

Since then, the Montreal authorities have been in reflection mode, according to an official statement from the office of Mayor Valerie Plante.

What is certain in the eyes of the city is that this withdrawal from Quebec harms Montreal's chances of presenting matches.

"The City has applied to host matches for the 2026 FIFA World Cup after obtaining written commitments from its government partners for equitable cost sharing," said the mayor's director of communications Youssef Amane. "The withdrawal of the financial participation of the government of cost-sharing therefore jeopardizes the Montreal candidacy - the only French-speaking city in the running.

"The City will take the time to study the legal, economic and sporting implications of such a withdrawal and to discuss with its partners, both from the two levels of government and its sporting partners, on the options available to her for the next step."

Amane added that "obtaining the 2026 FIFA World Cup, a sports showcase of international renown, would be a formidable engine of economic and tourist recovery for Montreal, while being a social development and integration tool for young people who practice this sport in the metropolitan area."

The City of Montreal was identified in 2018 as a candidate to host games.

The tournament is to be held in June and July 2026 in the United States, Canada and Mexico.