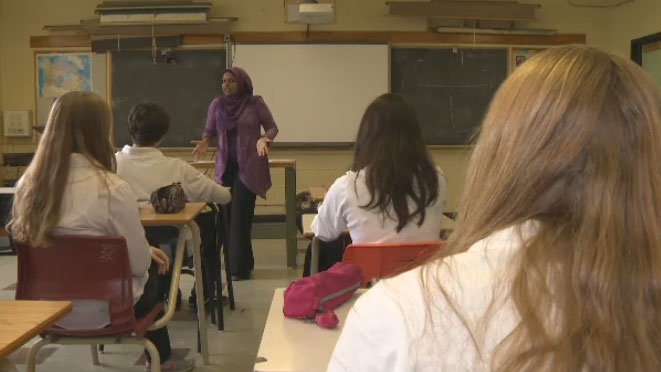 Quebec is once again replacing its high school history textbooks, this time to include more content on the country's Indigenous peoples.

It is the second time since 2016 that the government is revising the curriculum.

The two-year course first introduced in 2016 and beginning in secondary three has proven controversial, with cultural communities across the province arguing it reflects a rigid nationalist ideology that diminishes the role of non-francophones in Quebec history.

And while First Nations peoples are getting more space in the new textbook, other minority groups in the province, such as the English-speaking Quebecers, say their voices are still not being heard.

The Canadian Press obtained a letter sent recently by deputy education minister Sylvie Barcelo to the heads of Quebec's school boards informing them secondary three students will be working with a new history textbook by the fall.

In the letter dated May 31, Barcelo wrote the "Truth and Reconciliation Commission of Canada has cast more light on the experiences of the Indigenous peoples in this country, including residential schools, as well as on the terminology used to refer to them.

"The Commission's recommendations have had an impact on the (high school history) program, which was revised to better reflect the Indigenous perspective. Therefore, at the (government's) request, the textbooks for this secondary three course were revised and reissued by the publishers."

Canada's Truth and Reconciliation Commission released its final report and recommendations in 2015.

Neither representatives from the Cree School Board nor the Kativik Ilisarniliriniq, which is the school board of Nunavik, were available for comment on Wednesday.

Geoffrey Chambers, president of Quebec Community Groups Network, a Montreal-based anglophone advocacy organization, said he has an open mind but doesn't think there will be any substantive changes to the revised program for English-speakers.

"We have had no assurances or indication there will be material change that takes into account the interest and history of the (anglophone) community," he said, in an interview.

The current program, in place province-wide since 2016, simply doesn't mention anglophones that much, Chambers said, despite the weighty contributions of the community since the 1700s.

The 2016 textbook and curriculum was the initiative of the Parti Quebecois government before they lost power in 2014.

Barcelo's letter states "the existing textbooks will be replaced at no cost to the school boards as the (government) will be covering this expense."