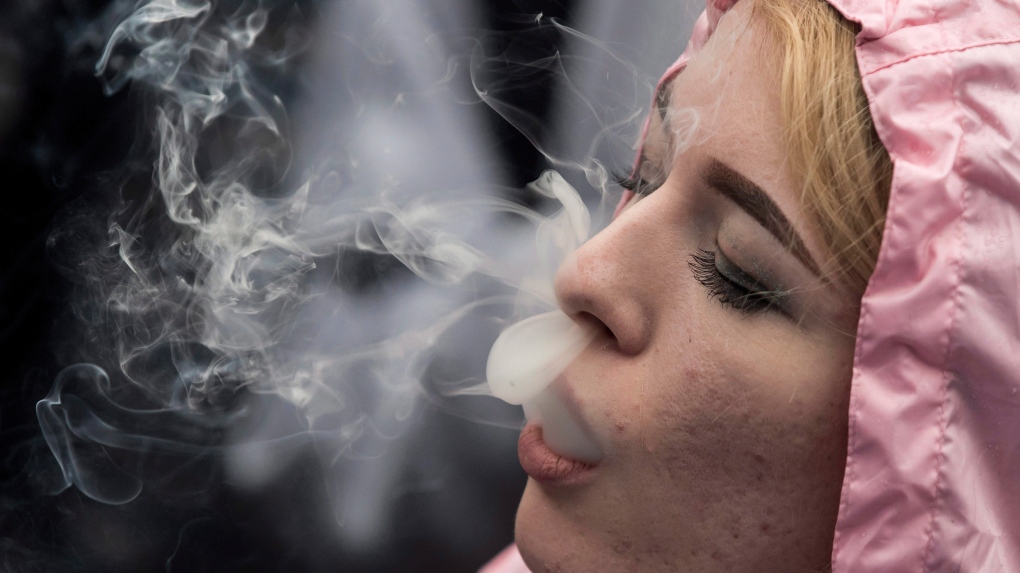 In this April 20, 2018 file photo, a woman exhales while smoking a joint during the 4-20 annual marijuana celebration, in Vancouver, British Columbia. (Darryl Dyck/The Canadian Press via AP, File)

The Quebec government faced strong opposition as public consultations began Tuesday on its bill seeking to increase the legal age of cannabis consumption and ban it from all public areas.

Junior Health Minister Lionel Carmant has said he tabled Bill 2 in order to protect young people and send a message that smoking marijuana is not a trivial matter. The proposed legislation restricts marijuana usage to people aged 21 and over and limits its smoking to private property.

The province's public health agencies are largely against the new restrictions. They say raising the legal age to 21 from 18 won't prevent young people from obtaining marijuana. And they say banning it from public areas marginalizes tenants whose landlords have banned smoking, creating a system were only certain groups can consume a legal product without breaking the law.

The Canadian Press has learned that two public health organizations are planning to suggest a compromise on the age limit during hearings on Bill 2 before a legislative committee in Quebec City. Two well-placed sources said the committee will be told the government should give gradual access to cannabis to youth aged 18 to 20.

People between 18 and 20 years should only be allowed to purchase marijuana with a low percentage of THC -- the drug's main psychoactive component, the committee will be told. "This proposal shows the scientific community, in public health, is trying to give an honourable exit door to the government on its policy," said one source, who wasn't authorized to speak publicly about the matter.

The current law is already one of the strictest legal regimes for marijuana in the country. Personal cultivation of cannabis plants is banned and the only way to legally purchase the product is through a government agency.

Marianne Dessureault, spokeswoman for Quebec's association of public health, will appear before the committee Wednesday. She said she understands the desire to protect young, developing brains from the risks of marijuana, but she feels the bill lacks a scientific basis.

"I am worried that we are going ahead and maybe transforming a law that sought to protect public health, towards a law that has more of a political flavour," she said in an interview. "It's concerning. It's clear that (the bill) has a populist appeal and that it doesn't have its place in public health policy."

Bastien Quirion, professor of criminology at the University of Ottawa, is also scheduled appear before the committee Wednesday. He questioned why the government would prohibit people under 21 years old from consuming cannabis but allow them to drink alcohol or smoke tobacco.

"One hundred years of cannabis prohibition show that it's not through banning it that we are going to eradicate the practice or prevent risky behaviour," he said in an interview. "It will just put certain groups in a precarious position."

Maude Faniel-Methot, a spokeswoman for Carmant, declined to comment on the idea of giving younger people gradual access to THC. She said the minister is open to listening to all suggestions to amend the bill.