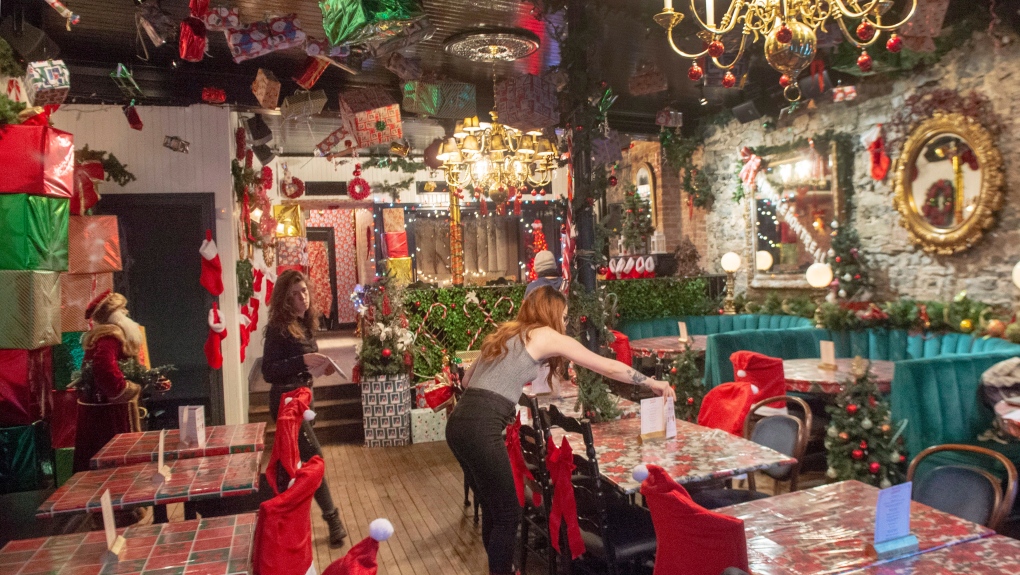 A sophisticated restaurant near the Old Port of Montreal is now an Instagram-ready holiday backdrop decked out with more than 350 metres of Christmas lights, wrapped presents fixed to the ceiling and Santa hats perched on chair tops.

Far from a restaurant makeover gone awry, the transformation is part of trend in which watering holes in search of a boost in holiday traffic are converting into Christmas-themed pop ups with at least four such locales throughout Canada and more than 90 around the world.

"The reception as a whole has been really positive," said Kevin Demers, owner of the Coldroom. He took over the space of the restaurant Scarlet Exclusive to host the pop up from Nov. 30 to Dec. 30.

He decorated the restaurant's three spaces with distinct holiday themes: a classic, kitschy Christmas in the dining area, white holiday decor close to the bar, and the terrace kept more simple and illuminated with Christmas lights.

Staff wear ugly Christmas sweaters adorned with gingerbread men, snowflake and holiday prints. Revellers sip on Christmapolitans, snowball old fashioneds or other themed concoctions. Those not feeling the holiday spirit can select from the Grinch menu, which boasts drinks named after Christmas bad guys. The Hans Gruber comes topped with a drinkable print of the "Die Hard" villain.

Demers is splitting half the profits with Montreal Children's Hospital.

"It should be more about giving back," he said.

The month-long event is part of the Miracle pop-up chain that's the brainchild of Greg Boehm, who owns a barware manufacturing and distributing company, as well as a cocktail bar and an eatery in New York City.

The concept started in 2014 with a phone call from his mother when Boehm was in the midst of construction on his cocktail bar, Mace. She suggested he stop renovations, decorate it with Christmas kitsch and open for a month in December.

Five years later, Mace still hosts the annual festive pop up and Boehm has turned the idea into a business, charging a flat fee for bars worldwide to host similar events under the banner Miracle.

Miracle provides the food and cocktail menu, teaches the bar how to create the drinks, provides professional photography and handles the public relations. Participants also have access to Christmas glassware made by his other company, Cocktail Kingdom.

Boehm also offers a Sippin' Santa tiki pop up, which formed in 2015.

The first Miracle pop up in Canada opened three years ago in Montreal, said Boehm.

There are 92 Miracle and Sippin' Santa pop ups around the world -- with four in Canada, including the one in Old Montreal.

Other locations include one in Toronto, hosted by Civil Liberties Bar in a different space on Queen Street, one in Quebec City operated by Maelstrom and Proof Cocktail Bar in Calgary.

Boehm sees Canada as one of Miracle's biggest opportunities for growth.

Bars in Vancouver and the Maritimes expressed interest in hosting the pop up next holiday season, he said. He's also eyeing smaller cities, like London, Ont.

The Christmas cheer draws people into these bars, said Boehm, and social media plays an extremely important role in any Miracle location's success.

"The goal is always to have any angle be a good angle to take a photo," he said, adding no corner can be left unadorned and most locations attempt to have one big, unique piece of decor. He points to the piece-de-resistance of the Toronto spot: a giant, red and white, lit up bear wearing a Santa hat. Its outstretched arms move to hug patrons who cuddle in close for a snap.

Retail pop-ups often curate experiences like that in hopes that millennials and others will want to share them on social media and create buzz for their brand, and for Miracle the strategy appears to be working.

If someone Googles "Miracle Montreal," a slew of photos of the space appear, said Demers.

"Just those photos everyone goes wild for," he said, explaining the reaction from people is that they have to see the cool-looking space.

But a colourful backdrop is just one part of the equation, Boehm said, emphasizing the cocktails served.

"People come for the Christmas festivities, but what really makes it work is delicious cocktails and true experience, where it's not just a place that's decorated but it smells good, sounds good, tastes food and looks good."