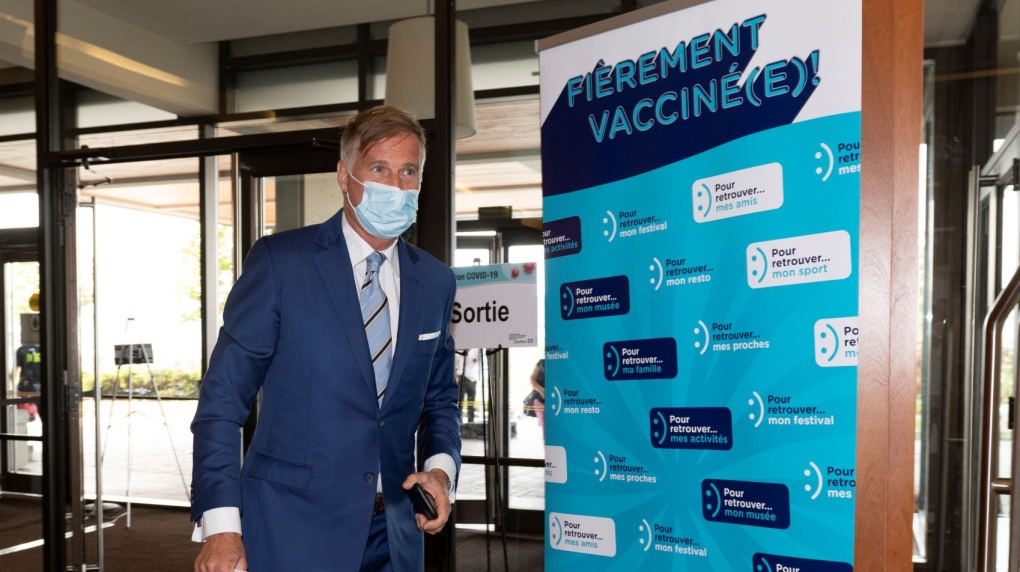 People's Party of Canada Leader Maxime Bernier walks by a sign that says "proud to be vaccinated" as he arrives a hotel, which is also a vaccination site, to launch his campaign in Saint-Georges, Que., Friday, Aug. 20, 2021. THE CANADIAN PRESS/Jacques Boissinot
ST-PIERRE-JOLYS, Man. -

A lawyer for People's Party of Canada Leader Maxime Bernier says Bernier will plead not guilty to charges of violating COVID-19 restrictions.

Alex Steigerwald told court today that he and a Crown attorney are working toward trial dates in the future, but no dates have been set so far.

The case is also being transferred to Winnipeg from St. Pierre-Jolys because courtrooms in the provincial capital are larger and more dates are available.

Bernier was arrested last June and charged with exceeding public gathering limits and violating Manitoba's requirement to self-isolate upon entering the province.

Bernier was beginning a three-day tour of Manitoba at the time and was pulled over after rallies in rural communities south of Winnipeg.

A spokesman for the People's Party called the arrest political repression.

This report by The Canadian Press was first published Feb. 22, 2022.

Canada's privacy commissioner says the belated disclosure that RCMP has for years been using spyware capable of accessing cell phone and computer microphones, cameras and other data as part of major investigations, is a clear example of why Canada's Privacy Act needs updating.

CRA says it has $1.4 billion in uncashed cheques sitting in its coffers

For millennial and gen Z Canadians, owning a home in this real estate market might seem like a pipe dream. In an exclusive column for CTVNews,ca personal finance contributor Christopher Liew offers some strategies to consider if you can’t afford the housing market yet.

Study connects climate hazards to 58 per cent of infectious diseases

Climate hazards, such as flooding, heat waves and drought have worsened more than half of the hundreds of known infectious diseases in people, including malaria, hantavirus, cholera and even anthrax.