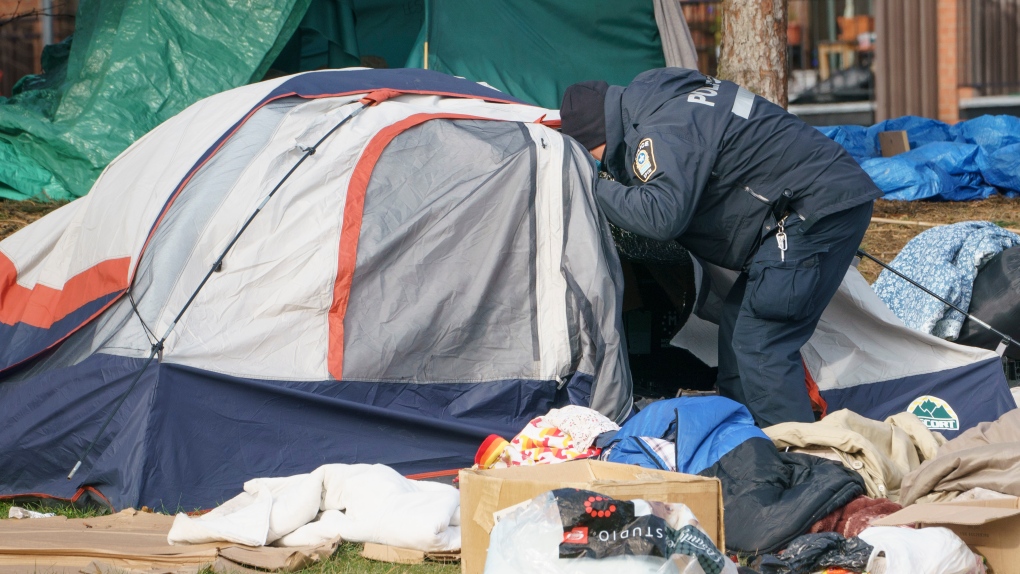 A police officer checks for people in a tent in Montreal, on Monday, December 7, 2020. Residents were ordered to leave the homeless campsite by Montreal's fire department following a fire on the weekend. THE CANADIAN PRESS/Paul Chiasson

Advocates for Montreal's homeless residents ramped up critiques of Parks Canada over the weekend, saying a series of local camping events the agency has scheduled throughout the summer set a double standard between those with financial means and those without.

The events, dubbed learn-to-camp, are described as an opportunity to learn basic camping skills for the price of $108.75 per tent along the Lachine canal in the city's west end.

"I laughed out of despair when I saw that," Annie Archambault, who works with a non-profit organization that helps Montreal's vulnerable populations, said in an interview on Sunday.

Archambault, of Rue action prévention jeunesse, said the initiative comes off as a bad joke as the city's authorities frequently dismantle encampments for the homeless erected on public land.

"It's insulting and ironic, we've been fighting for years against dismantling encampments for the homeless but the city has zero-tolerance," she said. "If you don't have money, you can't (camp) but for $108.75, you can."

Parks Canada posted a statement to its website cancelling the first event on Saturday without providing a reason for the move, but the same events scheduled for July 23, Aug. 13, 20, and 27 are still open for registration.

Parks Canada did not immediately respond to a request for comment.

Archambault said the remaining dates should be cancelled and the camping gear handed to groups that work with people without homes.

"It's not the activity itself that we're denouncing, but the irony of it and the location," Archambault said, adding Parks Canada lacked sensitivity in sending the message that public spaces are for people who can afford them.

"It's distasteful," Leblanc said in an interview on Sunday.

"Right now, there are several people living in the streets who have to deal with repression to find a spot where to go. It's a double standard. We promote Montreal as an inclusive city … some reflection needs to be done."

When asked about the criticism over the camping activity, Montreal Mayor Valérie Plante said last week the decision belonged to Parks Canada. She also reiterated the city's long-held stance that encampments are not a solution to homelessness.

"It's a question of dignity and safety; we will continue to discourage encampments," Plante told reporters on June 29.

For Leblanc, Parks Canada's initiative only mirrors a deeper issue.

"The question is not how Parks Canada could have done a better job, they were probably not ill-intentioned, it’s about not only the city but also the provincial government’s emergency response toward the housing crisis and the increase of people without homes," Leblanc said.

About 600 households were left without a home after the province's Jul. 1 moving day, according to a report released on Saturday by Quebec housing advocacy group Front d'action populaire en réaménagement urbain. About 420 renter households were without housing at the same time last year.

"We see nice camping of 15 tents on Lachine canal … why can't we do that type of thing," Leblanc said.

Leblanc stressed that dismantling encampments for the homeless is deeply taxing on unhoused people, urging officials to find solutions to secure Montreal's public space for everybody.

"Nobody wants to die in a tent, they want stability," she said.

This report by The Canadian Press was first published July 3, 2022.