Ottawa, Quebec reach agreement on child-care funding for $6B over 5 years

MONTREAL -- Quebec will soon be able to invest a large amount of money into its child-care network, following an agreement of $6 billion over five years with the federal government.

"This agreement will provide Quebec families and communities with additional support as we build back better from the pandemic," said Trudeau.

The federal government says negotiations with Quebec proceeded smoothly and quickly, due to the possibility of a general election call before the end of the summer.

As such, Ottawa accepted Quebec's request to not have any conditions imposed on the transfer.

"It's time for the rest of Canada to follow Quebec's example," Trudeau said. "Our plan for more affordable early child-care service will leave no family and no child behind."

Quebec created its own network of reduced child-care services in the 1990s and was given the option to opt-out of the federal program and receive full financial compensation.

Last April, Finance Minister Eric Girard confirmed the province will get just under $1 billion this year and close to $2 billion by 2025-26.

At the time, he said he received assurances from his federal counterpart, Chrystia Freeland, that the transfer would have "no conditions." 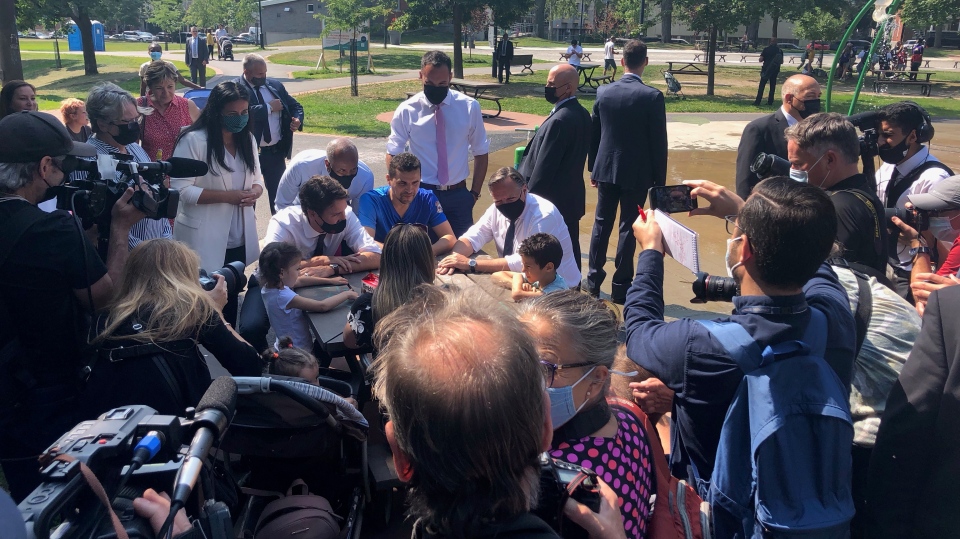 A 'significant portion' of the transfer will be used to strengthen Quebec's network of early childhood education and care services, as well as improve working conditions for educators, the federal government said.

"Young parents and their children will benefit directly," Legault agreed.

Quebec's child-care network is currently in dire need of help due to a lack of daycare spots, the recent closures of many family daycares and a worrisome labour shortage.

In addition, the wait for a child-care space is at an all-time high, with more than 50,000 names on the list.

Th governments note this announcement also confirms that it is possible to have federal-provincial agreements on an asymmetrical model, which allows Quebec to assert its identity without losing money.

The province already spends nearly $3 billion a year on its child-care system and this federal transfer would allow Quebec to create 22,000 new spaces.

Officials say this should be enough to make a difference, despite the high number of names on the wait list -- many parents are still waiting for a CPE spot even if they are already registered elsewhere.

In recent months, the federal government has entered into agreements with several provinces to implement its program and develop $10-a-day child-care spaces.