MONTREAL -- Exactly one month ago today, Quebec’s health minister announced the province had just entered a third wave of the COVID-19 pandemic, but projections show the province’s most populous city might bounce back from it better than expected.

Hospitalizations could stabilize or even drop in May as long as the public maintains a “strong” adherence to public health measures, according to modelling released Thursday from Quebec’s institute of public health (INSPQ).

“In Greater Montreal, the projections are more optimistic than before, given the high participation in vaccination and the anticipated additional doses,” the INSPQ report said.

But with lax adherence to the safety measures, hospitalizations and new cases could peak again by June, according to the report.

The situation in Montreal -- which it noted is still “fragile” -- could deteriorate if people don’t follow sanitary measures, if younger people don’t get vaccinated or if there are delays in vaccine supplies. 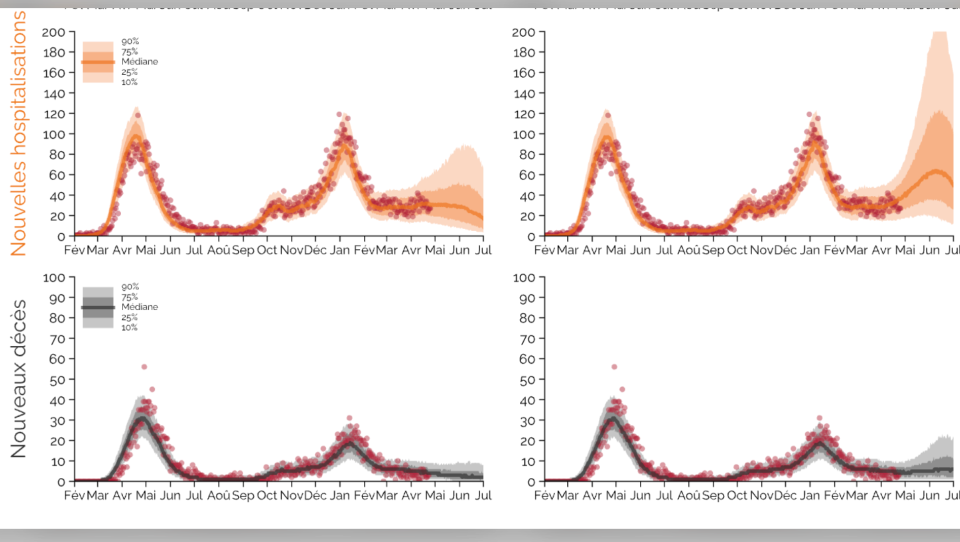 Modeling from the Quebec Institute of Public Health (INSPQ) shows hospitalizations could drop or stabilize in May in Montreal. (Source: INSPQ)

Quebec public health director Horacio Arruda will announce Thursday afternoon the province’s plans on what the vaccine roll-out will look like for the general population. The announcement comes on the same day as another milestone in the pandemic -- Quebec officially reached 3 million first doses administered on Thursday, which represents 35 per cent of the population.

The report noted that maintaining social contacts at the level that was seen in March could cause cases to rise significantly, though high vaccination rates could mitigate the impact on hospitalizations and deaths.

The number of patients in the ICU in the Montreal area is projected to decrease over the next two to three weeks.

INSPQ’s projections take into account the current rate of vaccination and the anticipated additional supply of more doses, including the progression of the more transmissible variant, B.1.17, first identified in the U.K. B.1.17 is the predominant variant in Quebec, with 3,345 confirmed cases identified.

In other regions of Quebec, orange and red zone measures were not enough to curb the spread of the virus, the report concluded. The measures included closing non-essential businesses and primary and secondary schools in places like the Outaouais and Quebec City.

There was another stark warning in the modelling: New hospitalizations are expected to rise slightly in those regions for a maximum of two to three weeks and then taper off and hospital beds could reach or exceed capacity. Nearly 60 per cent of the ICU beds are full, according to INSPQ.