Opinion: To prevent domestic violence, men must also be part of the solution 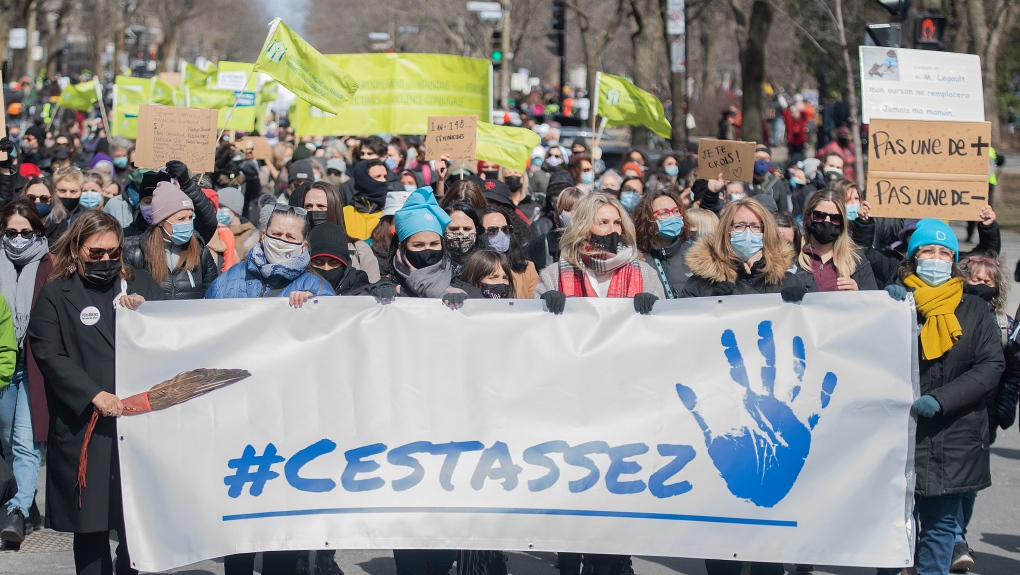 People take part in a demonstration to highlight violence against women in Montreal, Friday, April 2, 2021. THE CANADIAN PRESS/Graham Hughes

MONTREAL -- As Quebec faces a major wave of femicides, it is very obvious how much work is left to be done to identify, denounce and ultimately eradicate abusive and violent behaviour.

In the 1970s-80s, thanks to the women's movement, the province became aware of the urgent need to help women living with domestic violence. Entirely justifiable back then, the natural reflex of Quebec society was to help women, who were the victims of violent partners, to get out of the vicious cycle.

Government authorities invested in support resources, such as shelters for battered women, which are currently struggling to meet the demand.

While the increase in calls for help can be partially explained by the current pandemic situation, where quarantine, isolation and job loss have weakened women's social, economic and family safety nets, this problem is not new.

Domestic violence is unacceptable. It’s about time that we seriously address the other side of the coin, that is, the men involved, without undermining the work done with victims, which is always essential, now more than ever.

As President of the Ordre des travailleurs sociaux et des thérapeutes conjugaux et familiaux du Québec, I believe that professionals in all sectors of society have an important role to play in preventing, raising awareness, identifying risk behaviours and aiding not only battered women and their children, but also the men involved, who often tend to deny their controlling behaviour.

This said, in the case of domestic violence, as with any other social issue, facilitators’ efforts must be supported by social policies focused on prevention and support for organizations helping women and those whose mission is to help men with controlling or violent behaviour.

These organizations do excellent work, but now it is imperative to substantially increase their funding so that they can manage the ever-growing waiting lists. We also believe that, across all regions of the province, assistance services should be made available 24 hours a day, seven days a week, as well as housing for violent men in need of support.

The time has come for Quebec men to rise up, mobilize, take charge of their life and recognize that Quebec society is still based on a patriarchal model where men still dominate women, insidiously, within human, economic and social relationships.

In order to break the cycle of violence once and for all, we must rally together.

Speaking out, loud and clear, will enable men to break the taboos that persist, not only pertaining to physical, verbal or psychological domestic violence, but also with regard to some of the underlying factors such as childhood abuse, difficulty in managing emotions, drug or alcohol abuse, or mental health issues.

These taboos will not be broken overnight, but it is a start. To be successful, we need to have an open, social debate on the matter.

Men must take ownership of the issue, recognize and condemn domestic violence even in its most subtle forms, understand and discuss it not only with their sons, friends and colleagues, but also with their daughters and the women in their life.

Women can no longer be solely responsible for educating and trying to prevent and fight against domestic violence.

In the end, men must also be part of the solution.