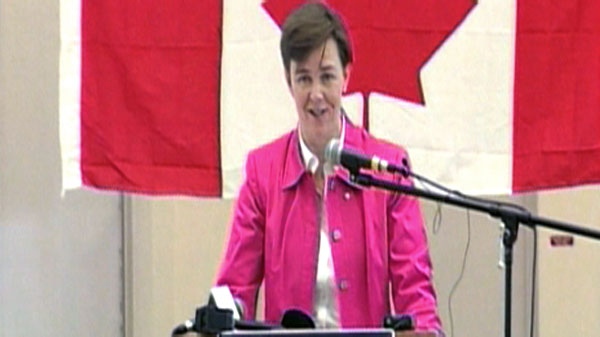 Kellie Leitch, a pediatric orthopedic surgeon announces her bid for the Conservative party nomination in the riding of Simcoe-Grey for the next election in Creemore, Ont., on Saturday, Sept. 18, 2010.

MONTREAL - Asbestos victims' relatives are asking a doctor-turned-Tory MP to hand in her medical licence if she won't take a stand against her party's support for the controversial industry.

An open letter signed by more than 40 people who have lost loved ones was sent Monday to rookie Ontario MP Kellie Leitch and obtained by The Canadian Press.

It goes further than a letter sent this summer from medical colleagues who noted that Leitch, having taken the Hippocratic oath, has an ethical duty to place health above any other consideration.

Now victims' families are telling the noted pediatric orthopedic surgeon that she should leave the medical profession if she won't condemn the cancer-causing substance.

"If you choose to continue to support medical misinformation and to support asbestos, we ask that you hand in your medical licence and cease being a physician, since you are in violation of the most fundamental standard required of all medical doctors: do no harm," said the letter.

The messages were sent at a time of growing public opposition to the industry while politicians mull over the future of one of Canada's last-remaining asbestos mines.

The bulk of Canadian asbestos exports are shipped to poorer countries -- where critics say there are improper safety regulations to protect people from contact with the dangerous fibres.

"You may not care about the people you are harming overseas, but we do," says the two-page letter to Leitch, a star Tory candidate in the May election.

"As asbestos victims ourselves, we will not sit idly by while you aid and abet the creation of more asbestos victims amongst the poorest and most unprotected people on the planet, who don't even have medical assistance or pain killers to help them when they die terrible deaths from asbestos."

Proponents of the asbestos industry, however, maintain that practices are in place to ensure that Canadian asbestos is handled safely, even in the countries that import the mineral.

Prime Minister Stephen Harper has been vocal in his support for the industry and the Conservatives are the only national party to back the sector.

The letter says it's time to change that policy.

One signer said she gathered most of the signatures at a Sarnia, Ont., screening last week of a Canadian documentary film that investigates the asbestos industry, titled "Breathtaking."

"Basically every reputable health organization in the world has condemned the use of any kind of asbestos."

The Canadian Cancer Society and the Canadian Public Health Association are among the groups that oppose the industry.

The Canadian Medical Association, the national organization of nearly 70,000 physicians, criticized the Tories recently for refusing to let the substance be added to an international hazardous-chemicals list -- a United Nations treaty known as the Rotterdam Convention.

Cattran described her father's mesothelioma as a horrible disease that "sucks the life out of" those who develop it.

"They basically suffocate to death between the growth of the tumour and also the liquid filling up their lungs," said Cattran, who is organizing a walk in Sarnia next month in memory of asbestos victims.

Signed by Canadians and Americans who say they lost husbands, great aunts and brothers to asbestos disease, the letter also highlights Leitch's recent comments to a local news outlet in her riding.

She told Simcoe.com earlier this month that the Conservative government will keep supporting the safe, controlled use of asbestos.

"It will continue to do so, anything to do with the decision that (buyers) make -- that's their choice," Leitch told the news outlet.

Leitch, the newly elected representative for the central Ontario riding of Simcoe-Grey, was also asked if her medical background had any effect on her decision.

The article reports that Leitch replied that her expertise is bones.

Leitch did not immediately respond Monday to an interview request. The Canadian Press has left numerous voice-mail messages for the MP at her offices in recent weeks, but has yet to receive any response from Leitch or any of her staffers.

Cattran said her sister, her widowed mother and some of the letter's signatories have also left messages for Leitch.

"She ignored all of us," Cattran said.

Meanwhile, the medical experts who signed the August letter said they haven't heard back, either. That prompted dozens of them to respond to the MP's silence by sending her a follow-up letter on Monday.

"We find it inexplicable that you have chosen not to answer the letter," says the message, which also took aim at Leitch's comments to the local news outlet.

"Although it may seem that supporting the use and export of asbestos might advance your political career, we suggest that doing so is incompatible with your duty as a physician."

The letters were sent at a time when the Quebec government is trying to decide whether to back a $58-million bank loan to extend the life of the Jeffrey Mine, one of Canada's last two remaining asbestos operations, for another 25 years.

The mine says the expansion project would create some 500 jobs in the central Quebec town of Asbestos.