One-in-10 Canadian families have had a child miss school due to COVID-19: survey 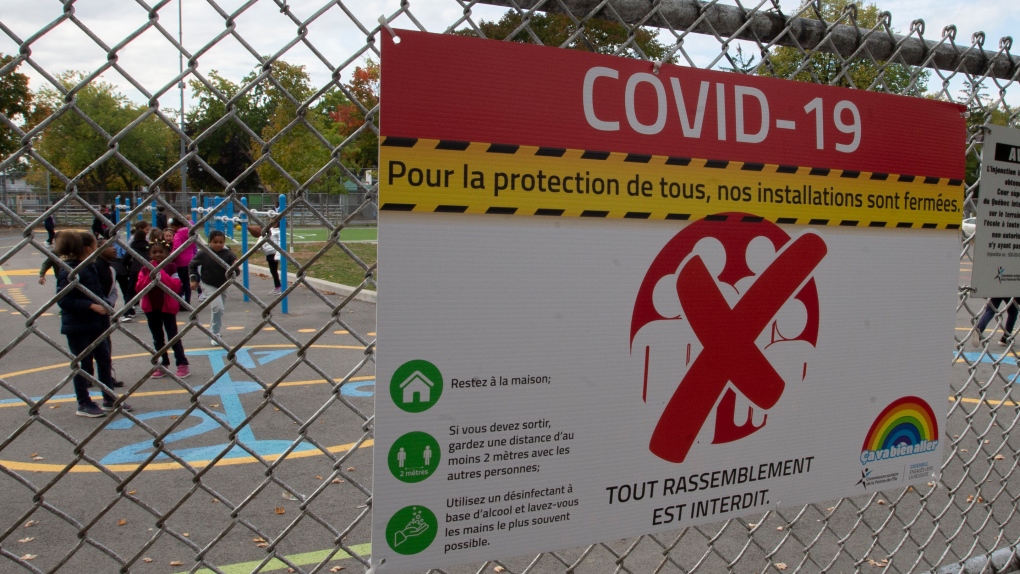 Students play in the schoolyard at an elementary school Monday, October 5, 2020 in Montreal. The Quebec government is set to announce tightened health measures for schools in the 'red zone' on its regional alert map. THE CANADIAN PRESS/Ryan Remiorz

MONTREAL -- At least 10 per cent of Canadian parents have had a child sent home from school because of COVID-19-related symptoms since classes restarted, a new survey has found.

Children First Canada and Abacus Data found that 13 per cent of parents in Canada have had a child sent home from school, leaving them to struggle with adjusting schedules while waiting for COVID-19 test results.

Children First Canada founder and CEO Sara Austin figured the numbers would be high, but said seeing the results was troubling.

"Intuitively, we thought the numbers would be high based on what we'd been hearing anecdotally from parents and even from seeing the rise of parents speaking up on social media about the challenges, but now we're seeing in black-and-white that this is a serious issue that socially has huge economic implications in terms of their return to work and their ability to stabilize our economy," said Austin.

In addition, about 600,000 parents have had to quit or switch jobs because of a change to school or daycare, according to the survey.

Felicity Hamer and her partner Christopher Reid have two sons: Clarence, in Grade 3, and Clyde, in daycare.

They pulled their younger son from the daycare the family loved due to fear of him contracting the virus, and insist that the older son wear a mask at all times while he continues at public school.

"It's really stressful," said Hamer, who said the family has been incredibly careful since the pandemic began to avoid public places with groups of people and wear face coverings.

Clarence was sent home for a week after developing a cough and both the child and father were tested. Neither tested positive for the virus, but it threw the family's already hectic schedule off course.

In addition, having the younger son at home meant Hamer needed to delay finishing a doctorate degree by a year, and Reid turned down a job.

"It changed the whole timeline of my Ph.D., and Chris turned down a teaching position," said Hamer. "It was going to be too much. As it is, we're overwhelmed."

"Which means I can't look for work for another year," she said.

Clyde misses his friends at daycare, as well.

"He's super lonely and wants to play with other kids," said Hamer.

"It confirms that for in order for kids to be able to stay in school, to receive their education and for parents to be able to work and support their families that there needs to be a lot more in place to make that happen," said Austin.

Rapid testing and better screening would be a good start in addition to more support for parents to be able to take sick days and alter work schedules, she said.

The survey polled 751 parents of school-aged children from Oct. 2 to Oct. 6.

Some other results of the poll were as follows:

The poll found the following for parents whose child required a COVID-19 test:

"What we're hearing from folks across the country is that this is a burning issue that many parents are facing," said Austin. "This has been a real struggle."

Austin said many were looking forward to the back-to-school season to provide some normalcy and support for their kids.

This has not been the case.

"Clearly there are a lot of pain points around this transition for parents and students alike," said Austin.

Austin said the poll does not bode well for Canada, which has seen its status as a top country to raise a child drop in recent years. She said Canada has dropped from 10th among OECD countries to 30th for children's well-being.

"We've been heading in the wrong direction for a long time," said Austin. "It certainly has taken a turn for the worst over the past six months."

Children, Austin added, are struggling with access to education, mental health, and parents are concerned about being able to support their children during the health crisis.

"We're deeply concerned about the health and well-being of kids in our country and the huge stresses that families have felt in recent months," she said. "Clearly the worst is not behind us. We have some real struggles for us in the weeks and months ahead where it's really going to take all levels of government to work together to ensure that kids and families can not only survive, but thrive."