The number of flooded Quebec homes decreased for the first time since last week on Tuesday night, according to new numbers from Quebec public safety.

Just under 1,400 people were forced from their homes by the flooding.

The heaviest flooding is near Lake of Two Mountains, Lake Saint Pierre, and along the Chaudiere and Beauce rivers.

With rain in the forecast for Wednesday, Thursday, and Friday, water levels are expected to rise and affect more homes, especially along the St. Lawrence River near Trois Rivieres.

"There will doubtless be more flooding to come," Public Security Minister Genevieve Guilbault told reporters in Yamachiche, about 100 kilometres northeast of Montreal.

"The weather, the temperature, the melting snow -- and with a water level that is already high -- what we can do is prepare the best we can," she added.

She thanked Canadian Forces members, who on Sunday had helped fill 4,000 sandbags and continued to provide help.

More than 800 soldiers are currently assisting homeowners and renters throughout the province. On Monday afternoon, a Canadian military cargo plane with supplies landed at St. Hubert airport. Those supplies will be distributed based on orders from the Public Security Ministry.

In Laval officials have visited close to 2,000 homes that have flooded or are at risk from floodwaters, and delivered sandbags to 1,400 homes. Sand is also being dropped off daily at six locations for residents that want to do more, and several streets have been closed.

Residents of Ile Bigras, which lies in the Riviere des Prairies between Montreal and Laval, said water levels have increased in the past few days. They have been told that Wednesday and Thursday will likely be the days when water is at its highest.

One woman told CTV News that she only just finished repairing the damage caused in 2017 only to have flooding once again threaten her home.

Premier Francois Legault spoke to reporters Monday after visiting a Gatineau neighbourhood that has been flooded for the second time in three years. He said Quebec cannot "waste the money of Quebec taxpayers" on compensating people for flood damage, only to see the same properties flooded again two or three years later.

That is why beginning this year, flooding compensation will be capped by the province at a cumulative total of $100,000, after which the only aid available will be to help people move out of the flood zone. They will be eligible for up to $200,000 for a new home.

"We have to accept the evidence," Legault said. "With the warming of the climate, there are events that are repeated more often than in the past, so we have to be able to adjust our programs, which is what we are doing."

Pierrefonds resident Michel Cournoyer said that Legault's offer is not good enough given the value of his home.

"My wife and daughter are discouraged but I'm kind of used to it. I've been here 30 years but it's never been that bad, especially two years out of three."

On the island of Montreal large swathes of the borough of Pierrefonds-Roxboro were flooded in 2017, but borough mayor Jim Beis said workers are now better prepared.

Dikes have been built higher in the past two years, inflatable walls have been installed, and pumps have been operating on several streets for days.

Volunteers working in the parking lot of Pierrefonds Comprehensive School have spent days filling sandbags and giving them to residents in order to protect their properties.

Regardless, the intersection of Pierrefonds Blvd. and René Emard St. was flooded early Monday morning.

Beis said the situation appears to be under control.

"Certainly in 2017 the extraordinary crisis that we had no one had ever seen before, and you learn from this type of events," said Beis.

"We started looking at ways of improving not only the infrastructure but also having the necessary equipment on site to make sure we deal with any eventual flood and I'd like to say we've done this and up to this point successfully."

Rigaud warns those living in flood zones to brace for more

Back in Rigaud, the residents who remained in their homes seemed to be in good spirits, even as they used kayaks and small power boats to reach houses that had turned into islands..

Luc Laperriere, a homeowner, said the last major flood, in 2017, is still on his mind. The damage his home sustained meant he had to move out for five months and contend with a nightmare of government bureaucracy for permits and compensation.

This time, he said he felt more mentally prepared after having sent his three large dogs away and moved his valuable equipment to higher ground. He said his home would be safe from flooding this year as long as the water doesn't rise more than another foot.

While he can see himself moving eventually, he thinks it would be wrong to force his neighbours out.

"People who have been here 30 or 40 years can't leave. It's their home," he said. He said people are getting better at protecting themselves from flooding and are attached to their homes.

"Relocating people like that, forcing them to lose the value in their homes, it's unacceptable."

The next street over, longtime area resident Louis Ouellette said having two major floods in three years is hard on residents. He said that before 2017, there hadn't been a flood of this magnitude since 1974.

He had come to help his cousin and their neighbours, but he acknowledged that moral support might be all he could provide. "What can you do?" he asked, as he stood in ankle-deep water in front of his cousin's house. "You can't stop the river."

Rigaud fire chief Daniel Boyer said a light armoured vehicle was called in to help with the evacuation of a couple who required medical attention. He said the Army vehicle was able to transport paramedics to the couple's home and get them to safety.

Boyer repeated his belief that water levels will not reach the same level as 2017 but "our job is to be ready for the worst."

(With files from Morgan Lowrie, The Canadian Press) 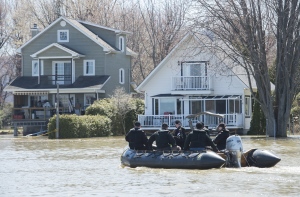 IN PICTURES: Flooding in Quebec and New Brunswick