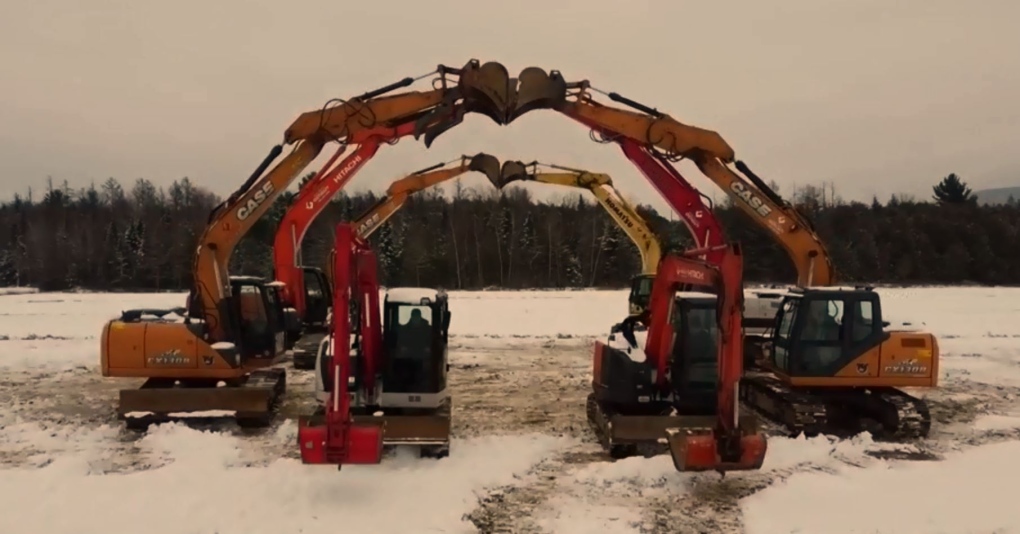 MONTREAL -- Heavy metal and backhoes are a natural combination. After all, the equipment is heavy, and made of metal. But a Quebec construction firm decided to take the pairing one step further.

In a video posted to YouTube, employees of Bertrand Ostiguy Inc., a Sheffield-based excavation company, take their backhoes through some epic dance steps, all set to an orchestral version of Metallica's classic 'Nothing Else Matters' by Finnish symphonic metal band Apocalyptica.

The excavators dip, spin, bow and pivot in unison, displaying a grace rarely seen at either construction sites or Metallica moshpits.

The routine was choreographed and shot by 14-year-old Julien Ares, whose uncle owns the company.

“My uncle, he had this idea a long time ago. We did a Zoom for Christmas and the idea came... about doing some dancing excavators. We just laughed at this but we were thinking about it all night," said Ares.

As to why he chose te heavy metal song as the background music, Ares said it wasn't his initial choice.

“At the start I wanted to do something that was slow because excavators are really big and can't make really fast movements. I wanted a song that was slow," he said. But his initial choices had too many high notes, and he felt the heavy equipment needed something with some more bass. That's when his uncle suggested he look up the legendary hard rockers.

Despite his young age, the video is not Ares first try at filmmaking, having shot some advertisements for his older brother's company. But his ambitions are larger than a few dancing backhoes.

“Of course I'm going to do another project! I don't know if it will be an ad, but for now I'm doing mostly ads. Maybe I would like to try a short film.”

No word on whether any choreography set to Megadeth's Rust in Peace is in the works.