For now, only traffic going to Montreal is able to use the bridge, but it will be fully operational for July 1.

The $4.2 billion project took four years to complete, replacing the former Champlain Bridge that had fallen into disrepair since its construction in 1962.

Federal Infrastructure Minister Francois-Philippe Champagne was on site for the opening of the bridge at 5 a.m. and was driving one of the first cars that rolled across the span.

“I was really, really excited. Every centimetre I was crossing I was thinking about the more than 2,000 men and women who have delivered a signature infrastructure for Montrealers. I mean, 50 million cars are crossing every year. We have delivered a toll-free bridge as we had promised to Quebecers," he said. "We know the Brooklyn Bridge in New York, we know the Golden Gate Bridge in California; I think this is going to be a signature landmark of Montreal.”

Workers were also on site, able to take a moment to enjoy the results of their hard work.

"It's been like non-stop work since 2015," said Gregorio Munoz. "I don't have words to describe the feeling we have."

The 3.4-kilometre bridge counts three lanes in each direction, plus a central deck for public transit, as well as a multifunctional path for cyclists and pedestrians with lookout points that is expected to open in the fall, and space for the REM electric train line. While the REM tracks are under construction there will be a reserved lane for buses on the shoulders of the roadway during morning and afternoon rush hours.

"I think this is a historical moment for our city. Already people know of Brossard because of many different things, but now with the new Champlain Bridge, I personally feel it's going to be a new destination spot," she said.

The new bridge is expected to be a much smoother ride, too, thanks to fewer expansion joints: eight in total compared to 57 on the current bridge, as well as the fact that the asphalt is laid down in two layers.

The Signature on the Saint Lawrence consortium guided by SNC-Lavalin won the contract that originally had the bridge scheduled for completion in December 2018, but construction delays and cost overruns have plagued the project from the outset.

SSL and the federal government have been at odds over who is responsible for the delays and added costs. Penalties as stated by the contract were set at $100,000 a day for the first seven days, then $400,000 a day for subsequent days, with a ceiling of $150 million. Analysts have said the penalty could hit $75 million.

Champagne said he was pleased with the timeframe nevertheless.

“I think four years to build something like that on a fast track -- first time we did something like that -- the conception of the bridge, the fabrication and the construction were done at the same, it just proves that if we put our minds to it we can do everything we want here in Canada,” he said.

The bridge is expected to last 125 years.

Northbound side of the bridge is open. Three lanes for cars and one lane for bus. Southbound opens July 1st @CTVMontreal pic.twitter.com/g1wGoh4aKq

Some of the first drivers on the new Champlain bridge @CTVMontreal pic.twitter.com/lsfxXFpKAU

- With files from The Canadian Press and CTVNews.ca's Christy Somos 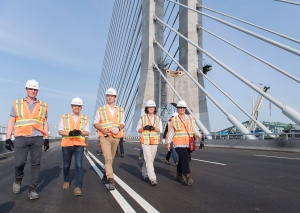 In photos: The new Champlain Bridge