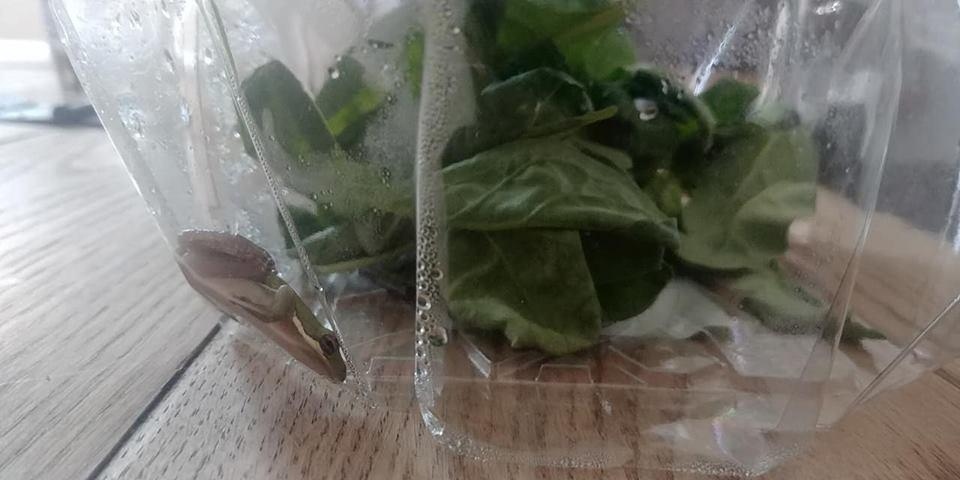 A Montreal woman had a bit of a jump-scare Tuesday morning while preparing her breakfast.

“We wanted to put spinach in our omelette, and we realized that there was an intruder inside the [container] of spinach. We almost got a frog omelette,” she told Bell Media journalists.

The 26-year-old who lives in Mercier-Hochelaga-Maisonneuve bought the spinach at a Super C in Boucherville, near her workplace, on March 11.

She said she had already eaten some of the spinach before she noticed the small frog.

Benedicto informed the Super C store in Boucherville, and they immediately removed the product from their shelves.

"The important thing is to notify the provider, as the client did. This kind of situation is very rare. It's not a food safety problem," said Metro Inc. Communication Manager Geneviève Grégoire.

Benedicto said she no longer intends to buy Fresh Attitude brand products and is concerned about possible health risks.

"Of course it's disgusting, especially knowing that these are pre-washed items. It worries me. How come there are no methods to [avoid this kind of situation]? If we had it in our meal, it could have been dangerous. I don’t know,” she said.

Vegpro International, the producer of Fresh Attitude brand salads, said Benedicto reached out to them via their customer service line.

Luc Prevost, vice-president of Vegpro International, told Bell Media that the company uses state-of-the-art equipment to clean and package its products – adding that it is not 100 per cent immune to such events. Since the frog is small, light and the same colour as spinach leaves, it may not have been detected, he said.

Vegpro grows its products in Florida during the winter. The frog population in the area is closely monitored and methods are put in place to prevent them from ending up in the crops, said Prevost.

Vegpro’s quality control department will get to the bottom of how this happened and said it will then contact Benedicto to explain and offer compensation for the spinach.

Despite the scare, Benedicto said she is keeping the frog and plans to take care of it.

- With files from Andrée-Anne Barbeau and Marie-Pier Boucher of BellMedia Inc.