Montreal unveils its plans for the city's first carbon-neutral community

The City of Montreal has unveiled its plans for a slower-moving neighbourhood at the former site of the Hippodrome horse racetrack.

The hope is to limit vehicles there to public transit and better connect the metro to the Namur- Hippodrome neighbourhood. The goal is to make it Montreal's first carbon-neutral community.

"This project – this huge project – is absolutely not one door, one car," said Montreal Mayor Valerie Plante. "If people are looking for that, they're not going to find that within the Hippodrome-Namur."

It's similar to a promise former Montreal mayor Gerald Tremblay made seven years ago.

"Fifteen per cent will go to social housing and 15 per cent for affordable housing," he said at the time. 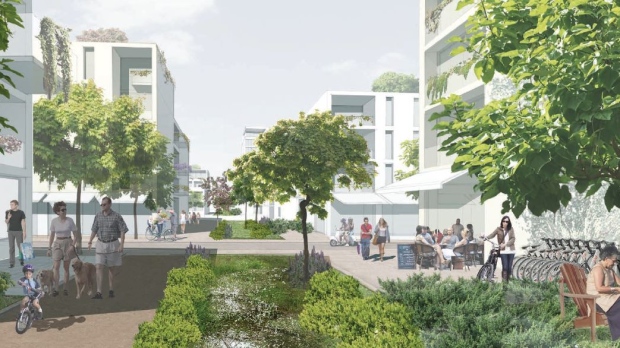 The Plante administration admitted the plan is ambitious but said it is necessary for its fight against climate change.

It's also what Montrealers are looking for, said NDG-Cote-des-Neiges Borough Mayor Sue Montgomery.

"They want a livable community that doesn't cause them all kinds of stress to get their kids across town," she said.

Political opponents say the plan isn't realistic; the infrastructure alone would cost millions because there is currently no plumbing or electricity.

"What was announced today is an utter pipe dream about a project that might be developed here 10 or 20 years from now, which will be supposedly carbon neutral," said city councillor Marvin Rotrand.

Public consultations on the project will begin in the fall, and Plante said she hopes to break ground in three to four years.

Document on the Namur-Hippodrome Neighbourhood