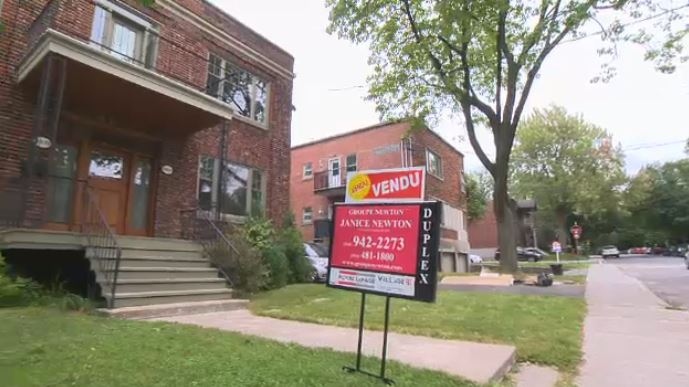 MONTREAL -- The cost of housing per square foot has skyrocketed in Montreal while other cities saw little change over the last year, according to a new national survey.

The study found that condominium prices in downtown Montreal are up 13.5 per cent from last year to, on average, $805 per square foot.

That’s not as high as other cities, but it’s catching up -- and Montreal's rate of growth is outpacing other major Canadian cities.

Toronto’s condo prices grew to $1083 per square foot, an increase of just under 10 per cent, according to the study. In Vancouver, where you can find some of Canada’s most expensive condo prices, rates are down 4 per cent to $1192 per square foot.

To make the comparisons, Canadian real estate giant Century 21 collected data from real estate boards across the country to calculate the home costs per square foot.

Montreal’s rise was even more explosive for detached homes and townhouses.

Detached houses in Montreal’s downtown and southwest rose to $958 per square foot, 40 per cent up from last year.

“People had a lot of time to figure out they don’t like the home they’re in,” she said. “They all want pools.”

There was a big spike in sales, she noted, following a pause in brokerage during the spring, at the peak of the pandemic.

Experts say the pandemic will push people into the suburbs as they search for affordable housing and home office space.

“A huge portion of our society's housing needs changed overnight,” said Shyiak. People “no longer need to be 10 minutes from the office.”

He says that could mean less demand for condos in the future. “People want their own front door,” he said.

“When mortgages go up, rental rates will go up too,” said housing advocate Darby MacDonald. “As people are buying more expensive houses, it will be the renters that suffer.”

Within Quebec, Montreal already has some the highest rental rates, according to a recent study of online listings from RCLALQ, which looked at a handful of cities and towns in the province.

Without more government intervention, Montreal’s reputation for low rental rates will soon be a thing of the past, said Maxime Roy-Allard, the group's spokesperson.

There were hopes at first that the pandemic, and the shifting housing needs within it, would bring some relief to the climbing rent prices in the city, Roy-Allard said.

“We thought the pandemic would affect it a lot,” he said. “It didn’t.”