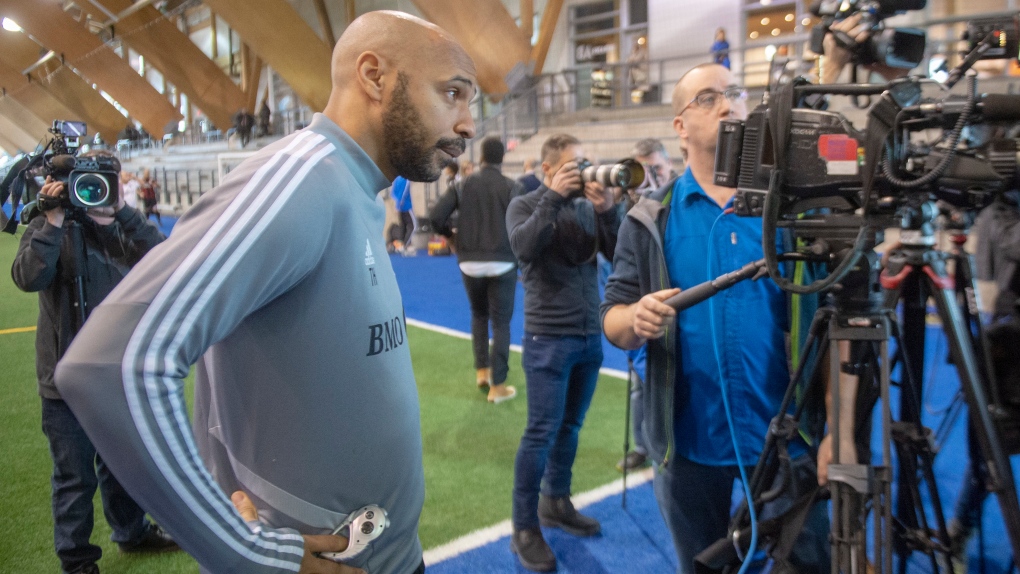 The Impact play their first CONCACAF Champions League match since losing the 2015 final when they take on Costa Rican side Deportivo Saprissa in the first leg of the round of 16 on Wednesday. The return leg is Feb. 26 in Montreal.

Players believe Henry's own UEFA Champions League experience as a player -- with Monaco, Arsenal and Barcelona -- can help prepare them for a hostile environment like Costa Rica's Estadio Ricardo Saprissa Ayma.

"He can prepare us for that Champions League atmosphere," said veteran defender Rod Fanni. "That's reassuring for us -- that whatever situation presents itself, here's someone who knows how to react. You always want people like that on your side.

"A new coach brings with him new tactics, a different soccer culture, and a lot of experience."

Despite Henry's arrival in the off-season, the Impact remain considerable underdogs against Costa Rican giants Deportivo Saprissa, three-time winners of this competition (when it was known as the Champions' Cup) in 1993, 1995 and 2005.

The Canadian side took a major hit on offence last week when Ignacio Piatti joined Argentina's San Lorenzo after six seasons with Montreal. Piatti wanted to return home and requested to have his contract terminated. The 35-year-old was the club's leading goal scorer in all competitions.

His departure creates an opportunity for attacking players like Maximiliano Urruti, Anthony Jackson-Hamel and Bojan to fill the void in the Argentine's absence.

"We lost Nacho (Piatti), he was an important piece of our team," midfielder Samuel Piette said Monday before the team's departure. "It's up to us to find answers offensively, to create chances and put them in the back of the net. We have the right quality on this team."

The Impact also lost three players on their back line in the off-season when they failed to re-sign Bacary Sagna, Daniel Lovitz and Victor Cabrera. Montreal was already struggling defensively last year, conceding 60 goals in Major League Soccer.

It was a challenging pre-season for the Impact, who lost four of five exhibition matches (1-4-0) while failing to score in three of them.

Another advantage for Deportivo Saprissa is match fitness. Due to scheduling differences between MLS and Costa Rica's Primera Division, Saprissa is already nine games into their season.

The Costa Rican side is second in the table with a commanding 6-1-2 record.

"They're a well-oiled machine and they know each other very well," said Piette. "They're also in better physical shape than we are. I'm not saying their players are more physical, but they're more match-ready than we are. That's what they have going for them. We know what to expect.

"We've been waiting for this one for a long time. Pre-season is fun, friendlies are fun. But nothing beats a real competitive game."

The Impact are determined to keep a clean sheet in the first leg of the aggregate series. Going down early could prove costly in Henry's coaching debut with Montreal, especially in a belligerent 23,000-seat stadium far from home.

One of the keys to success will be shutting down midfielder Christian Bolanos. The 35-year-old, who spent two seasons in MLS with the Vancouver Whitecaps, already has five goals this year.

There's also midfielder Johan Venegas, who played for the Impact from 2015 to 2017. Yet another threat is 17-year-old sensation Manfred Ugalde.

"We're expecting an intense atmosphere," said Fanni, now in his third season with Montreal. "We've been preparing ourselves for it, but we can't focus on that too much. We know we have our work cut out for us. This is a new team with a new mentality. We're still learning.

CENTRAL AMERICAN POWERHOUSE: Deportivo Saprissa is the most decorated team in Costa Rica with 34 national titles. This is their ninth CONCACAF Champions League appearance.

HOW THEY GOT HERE: The Impact earned a spot By defeating Toronto FC on penalties in the Canadian Championship final last September. Saprissa qualified by winning the CONCACAF League title in November.

FIVE YEARS LATER: The Impact are back in the competition for the first time since losing the final in 2015 to Club America. After the teams tied 1-1 in the first leg in Mexico, the Impact dropped a 4-2 decision in the second leg in front of 61,004 fans at Olympic Stadium.

BACK TO COSTA RICA: During Montreal's run to the '15 final, the Impact made their first-ever trip to Costa Rica for a competitive match. Alajuelense beat Montreal 4-2 in the second leg of the semifinal but the Impact advanced on away goals.

INKING BINKS: The Impact signed England youth international centre back Luis Binks on Tuesday. The 18-year-old rose through the ranks of Tottenham Hotspur's academy. Binks was unavailable for the first leg against Saprissa.