It’s designed with a traffic theme, with overlapping road signs and a highway snaking across the deck. It’s one of two boards she designed for Skateboards for Hope, a community organization that gives out skateboards to children who might not otherwise have the chance to try the sport.

“Playing sports my whole life has allowed me to create so many new friends and be present in my community, so I think these skateboards will do the same,” she says.

Hayes-Babczak is a student at The Study. The upper-level art class has taken on the project of painting the boards to be donated.

"It’s great because it’s not just going to be displayed on the wall or in the museum, it’s going to be used,” said Grade 10 student Vivian Chui.

Around 2,500 boards are being decorated by Montreal-area students right now.

In it’s nearly decade in existence, Skateboards for Hope have given out 9,000 boards around the world. 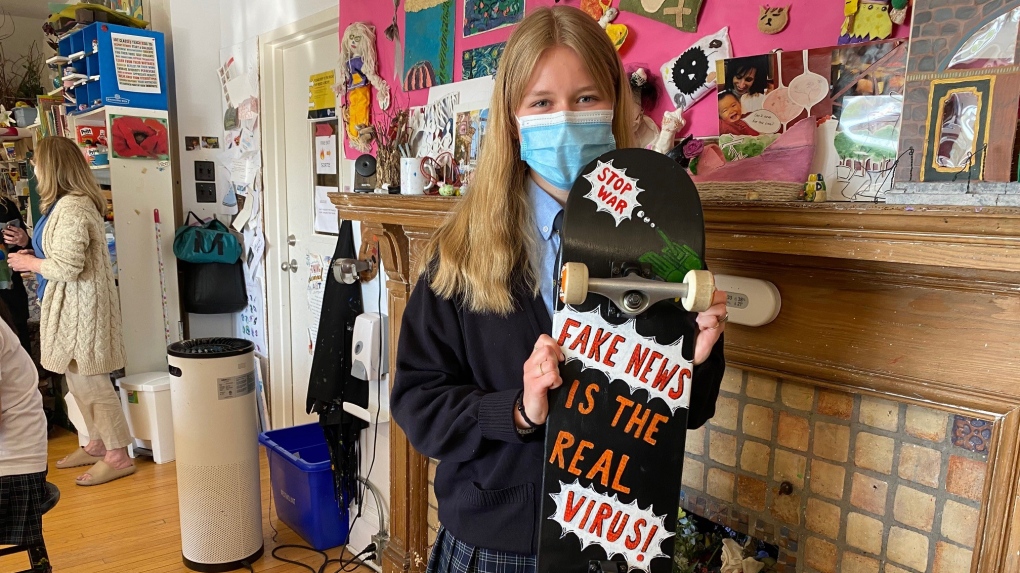 Skateboards for Hope gives kids the chance to design decks that will be sent around the world. (Kelly Greig/CTV News)

“Knowing that that art is going to be given to somebody who maybe doesn’t have the same circumstance as you but will find joy in skateboarding, I think that’s the whole point,” said founder Betty Esperanza.

Many of the boards painted in Montreal are headed to Uganda and Cuba.

“Physically, mentally and spiritually, skateboarding is a very community-oriented activity because even though you do skateboarding alone, you do it with other friends,” she added.

Painting decks is also a way for the students to learn about street and pop art styles. For some it’s a chance to express themselves.

Chui’s board shows a wide-open mouth.

For the organization’s founder, skateboarding is more than a sport. "Anyone who learns to balance on the board, that’s pretty metaphoric with life. You fall off, you get back on. When you’re on it for a minute, you think ‘oh, i can do this’.' That positive re-enforcement that you tell yourself translates into everything in life,” said Esperanza.

Ottawa protest organizer Tamara Lich will spend at least five more nights in custody in Ottawa after she was arrested in Alberta for allegedly breaching bail conditions.

Shooting in Newark wounds 9; all expected to survive: police

Nine people, including a teenager, were wounded Thursday evening in gunfire outside a neighborhood grocery shop in Newark, police said.