Milos Raonic easily moves to second round of Rogers Cup 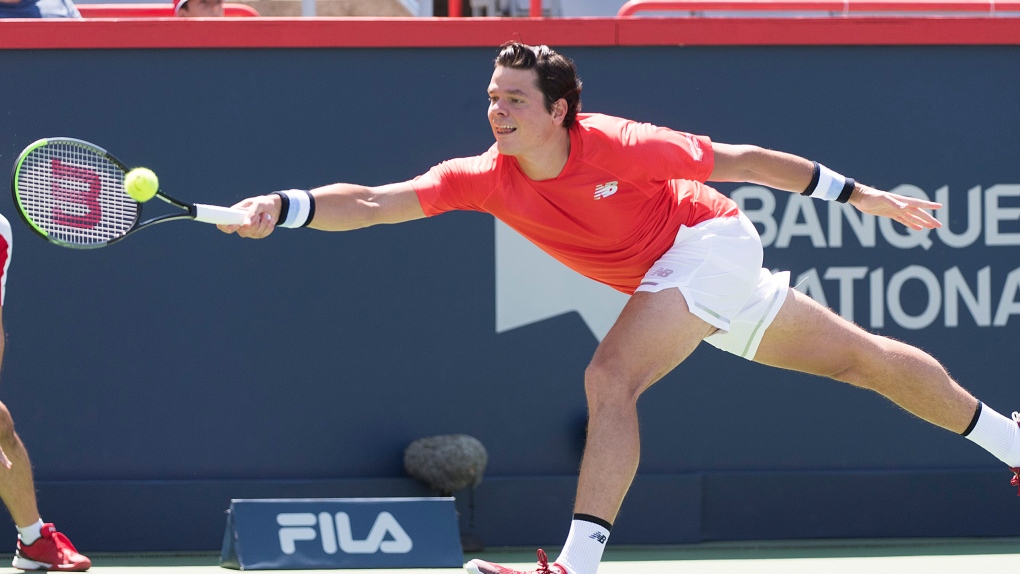 Milos Raonic lunges for the ball during his first round match against Lucas Pouille of France at the Rogers Cup tennis tournament in Montreal, Monday, August 5, 2019. THE CANADIAN PRESS/Graham Hughes

MONTREAL -- In the midst of a frustrating, injury-ravaged season, Milos Raonic has learned not to expect a lot from his body.

The Canadian's big frame didn't let him down Monday afternoon on home soil.

Raonic's booming serve produced 16 aces -- including 10 in the first set -- to overpower France's Lucas Pouille 6-4, 6-4 in men's first-round action at the Rogers Cup in Montreal.

The 28-year-old's career, while wildly successful with eight singles titles and nearly US$19-million in earnings, has been dotted by a laundry list of physical ailments.

"It's led to a lot of disappointment," Raonic said of the various injuries, including knee and back issues, that have limited him to 10 events this season. "I'm still trying to find the first tournament I can get through healthy this year.

"That alone is pretty tough to swallow, but it is what it is. I just try to go out each week as best prepared as I can be (and) try to give it everything."

The six-foot-five Raonic, ranked 20th in the world, certainly did that in dispatching Pouille in just one hour 12 minutes on centre court at IGA Stadium.

"There is not much to talk about because there were not any rallies," said the Frenchman. "In these kinds of matches, you know it's only about return and serve. It's really, really tough because when he's serving like this ... he's really tough to read."

Raonic broke Pouille in the third game of the first set and did the same midway through the second before closing things in tidy fashion.

The victory was the Thornhill, Ont., product's first in Montreal since making it all the way to the 2013 final when he lost to Rafael Nadal.

"It wasn't something on my mind by any means," Raonic, who has failed to advance beyond the second round of the Rogers Cup since 2016, said with a smile of his dry run in Quebec. "I remember my matches quite well, so it's not something that I just miraculously forgot."

The women's side of the 2019 bracket is being played in Toronto. The tournament alternates between the cities every year.

Raonic fell to Pouille, the world No. 29, in the quarterfinals of the Australian Open back in January, but improved to 4-1 all-time against the 25-year-old with Monday's win.

The top-ranked Canadian was originally supposed to open against Taylor Fritz of the United States, but was bumped up when South Africa's Kevin Anderson, the ninth seed, pulled out of the $5.7-million ATP Tour Masters 1000 series event over the weekend.

"It was a tough first round against Lucas," Raonic said. "To play well (and) get the wheels going in a positive way, I have to be happy with that."

Raonic will now face either Montreal native and rising teenage star Felix Auger-Aliassime (ranked 22nd) or Vancouver's Vasek Pospisil in the second round.

Auger-Aliassime and Pospisil -- concidentally playing doubles together for the first time Monday -- fell 7-6 (7), 7-5 to veterans Jeremy Chardy and Fabrice Martin of France.

While unfortunate, Raonic said meeting a Canadian early in singles is a byproduct of having six players from north of the 49th parallel on tour.

"I'm sure the odds are much higher than they have been in the past," he said. "That's just how it plays out sometimes."

Denis Shapovalov of Richmond Hill, Ont., was slated to take on 38th-ranked Pierre-Hugues Herbert of France in the evening session.

The 20-year-old Shapovalov, who sits 31st in the world, captivated tennis fans in Montreal two years ago when he upset Nadal in a memorable third-round match.

A four-time Rogers Cup champion following his victory in Toronto last year, Nadal is the tour's No. 2-ranked player and the clear favourite with Novak Djokovic and Roger Federer skipping this year's event.

Along with the other top-7 seeds, Nadal has a bye into the second round.

The 207th-ranked Pospisil reached the semifinals in Montreal in 2013, defeating No. 6 Tomas Berdych along the way before falling to Raonic. This season, however, the 29-year-old is a wild-card entry attempting a comeback after spending eight months recovering from a serious back injury.