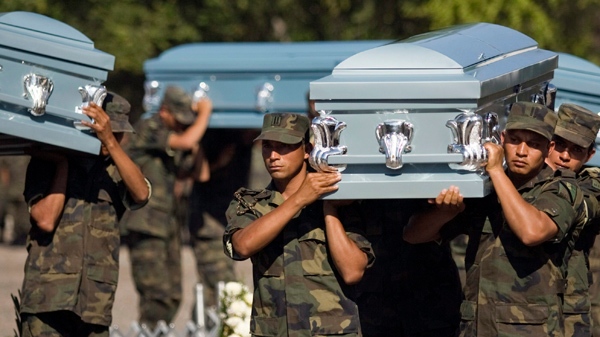 Soldiers carry coffins during the funeral of six members of Mexico's Army that were found decapitated in Chilpancingo, Mexico. (AP Photo/Claudio Cruz, File)

The federal government said the measure was necessary due to a high-number of false refugee claims from Mexican visitors to Canada.

But Quebec-based Mexicans have decried the situation, saying that Mexico has become a dangerous country due to drug trafficking and rampant police repression.

Thousands of people, including many innocents, are killed each year in the ongoing drug war, according to Oscar Carillo who protested in front of the Guy-Favreau building Sunday.

The Canadian government counsels visitors to Mexico to beware of their safety due to the violence.

Carillo considers that tourist advisory as evidence that many more of the Mexican refugee claims are justified.

Many Mexicans fear for the safety of themselves and their families, he said.