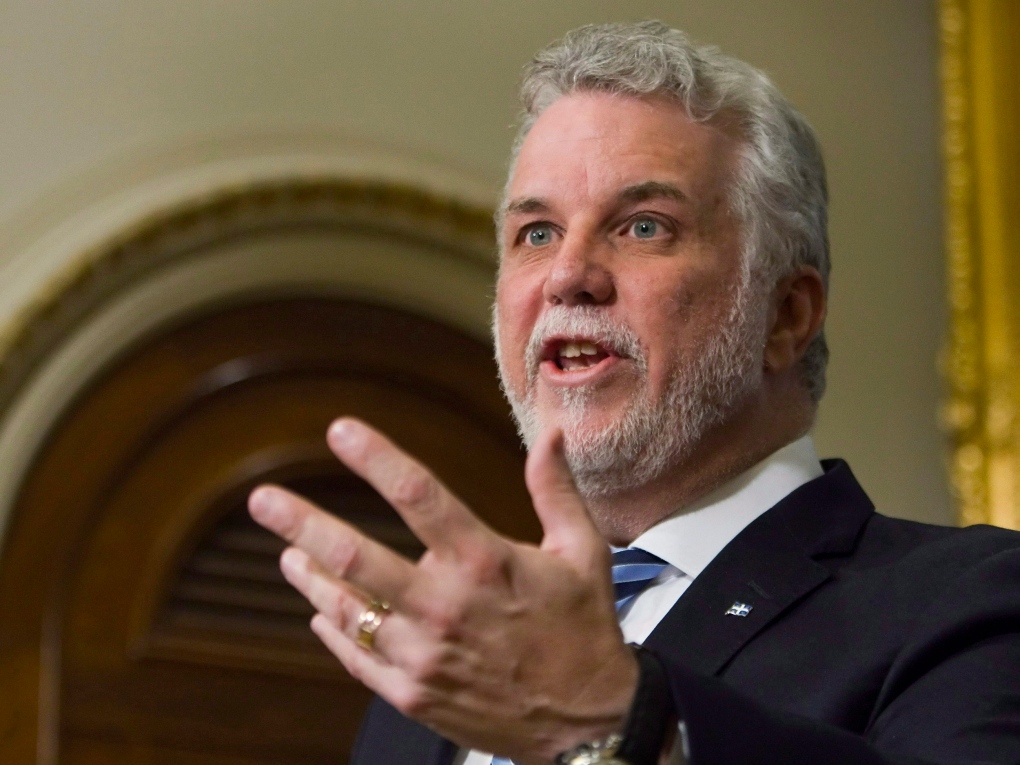 MONTREAL -- The politician who will lead pro-Canada troops into the Quebec election has done something unusual with his federalist convictions: he's proclaimed them in public.

The forthrightness from rookie Liberal Leader Philippe Couillard about his attachment to Canada is so uncommon for recent captains of the federalist party that his predecessors have steered away from the subject.

A former cabinet colleague even suggests that Couillard consider softening his outspoken passion for Canada while in command.

Monique Jerome-Forget, an ex-finance minister who served alongside Couillard in cabinet, said federalists in the province are often viewed as less than full-fledged Quebecers, even though the majority of the population here doesn't support independence.

But such thinking hasn't stopped Couillard from making several public declarations about his emotional connections to both his Quebecois and Canadian identities.

Jerome-Forget said former Liberal premier Jean Charest, a staunch federalist, had to adjust to Quebec politics by toning down his public expressions of admiration for Canada after making the jump from Ottawa.

"To keep his base, to keep Quebec and to keep winning Quebec, (Charest) had to soften that kind of language," she said of Charest, who led the federal Progressive Conservatives before entering Quebec politics.

"So, perhaps Philippe is going to have to learn that he has to soften."

Couillard, who succeeded Charest last year as Liberal leader, will take the party into the April 7 election, which Premier Pauline Marois called Wednesday.

He appears to have much work ahead.

Opinion polls suggest Marois' pro-independence Parti Quebecois has surged and could be within striking distance of a majority mandate.

Despite its long-held perch as the main pro-Confederation option, the Liberal party has actually been stubbornly nationalist at times and, at one point, it even appeared to flirt with Quebec independence.

Liberal leaders of the past, like Charest, have kept their federalist beliefs close to their chests with hopes of wooing the province's soft nationalists, or at least avoid scaring them off.

Couillard, who served as health minister from 2003 until he took a break from politics in 2008, voiced his passion for Canadian unity right out of the gate, even before he cruised to victory in the March 2013 leadership race.

Months earlier, he wrote an English- and French-language op-ed that hailed former Canadian prime minister Sir Wilfrid Laurier, a federal Liberal, as an inspirational figure for the provincial party.

Couillard has also argued how it is time for federalists to stop allowing sovereigntists to hog the province's idealism turf while pro-Canadian forces focus on the practical benefits of Confederation.

In January, he expressed his fondness for Canada once again during his maiden speech as Opposition leader in the legislature.

"We are Quebecers first, but we are also proud to belong to the Canadian federation," said Couillard, 56, who re-entered the national assembly after winning a December byelection.

"This belonging provides us the opportunity to benefit from the major economic and financial entity that is Canada. That is a positive impact that is easy to show.

"But beyond the numbers and the billions, it's first and foremost for us the choice of a model of citizenship that is the envy of the entire planet."

The former neurosurgeon's vocal support for Canada is nothing new, said Jerome-Forget, who recalled his passionate defence of one federal institution in June 2007 on the floor of Quebec's legislature.

She said Couillard was shocked when several PQ members remained in their seats as politicians stood to applaud a half-dozen Canadian soldiers who had been invited to visit the national assembly ahead of their deployment to Afghanistan.

The Pequistes' move came in protest over Canada's Afghan mission.

Couillard, she added, shouted that whether they agree or disagree with the mission, they should show more respect for the people who fight for the country. He called his opponents' decision to remain seated "regrettable and pathetic" in an exchange so heated that proceedings were delayed by 30 minutes.

"He was furious," said Jerome-Forget, who sat beside Couillard in the legislature.

"He screamed at them."

Couillard, whose son was a student at the time in a Canadian military college, later apologized for his outburst, telling the chamber: "I hurt people in this room, please excuse me. My emotions got the best of me."

He is now set to battle the PQ as a rookie Liberal leader.

In the first months after winning the leadership, polls suggested that Couillard enjoyed significant public support.

But more-recent surveys have found the honeymoon is over.

The PQ, meanwhile, appears to have gained momentum, particularly since the first details of the Marois government's controversial plan for minority accommodation was leaked to the media last August.

The secularism plan, dubbed the charter of values, seeks to prevent some public employees from wearing religious symbols in the workplace, like a Muslim veil or a Jewish kippa.

It ignited fiery debates and led to demonstrations across the province, but also attracted considerable support. Its proponents argue it encourages gender equality and protects Quebec from what has been described as encroaching religious fundamentalism.

Couillard has faced criticism over how he's handled the charter debate, raising concerns about his leadership.

At first, he warned the plan would trample on people's rights and promised it would become law "over my dead body."

The party's steadfast opposition, however, prompted Liberal MNA Fatima Houda-Pepin, the only elected Muslim woman in the legislature, to split with her colleagues.

She broke ranks after a colleague said he would welcome Liberal candidates who wear the chador, an open cloak which extends over the head but does not cover the face.

Houda-Pepin called the Islamic chador the ultimate expression of oppression against women and a symbol of radical fundamentalism.

Less than 24 hours after Houda-Pepin left the party, Couillard shifted the Liberal position on the charter, saying he supported elements such as forbidding the chador and face coverings in government offices.

"That may hurt him in a campaign because, of course, (Marois) is going to focus on that ... That he painted himself in a corner, which of course in politics you should never do," Jerome-Forget said.

Couillard has had to deal with other conflicts within his own caucus.

In February, he was forced to insist his party was united after Liberal MNA Henri-Francois Gautrin told The Canadian Press he thought the PQ would win a spring election, and maybe even a majority government. Gautrin has since parted ways with the Liberals.

Couillard has also been criticized for the Liberals' plans for the economy, long viewed as the party's strength.

These struggles have tested a man viewed as a potential Liberal leader upon his 2003 arrival in provincial politics.

Some wonder, however, whether he has enough charisma for the gig.

"One of his problems is people think he's cold," said Jerome-Forget, who held several cabinet posts in Charest's governments until she left politics in 2009.

She also said Couillard has a sense of humour.

Jerome-Forget recalled how the two of them were in the middle of arduous negotiations with unions in a boardroom adjacent to her office.

Couillard suddenly stood up and told her to follow him into her office. She recalled that he said, "Let's go and have a good laugh together."

While civil servants continued with the discussions in the next room, Couillard played a few of the goofy, wildly popular "Tetes a claques" Internet cartoons for Jerome-Forget on her computer.

"And I laughed to no end. He was very good at relaxing people... Philippe could find solutions to problems," she said.

"(The civil servants) kept on discussing and we came back and that was it."

Jerome-Forget believes his key to electoral success will be convincing Quebecers that the Liberals are the best option to jump-start the province's struggling economy, an area widely viewed as the PQ's weakness.

She said any recent drop in support for Couillard was likely due to his decision last year to spend so much time in outlying regions, where he introduced himself to Quebecers and tried to energize the Liberal grassroots. That mission, however, kept him far away from the TV cameras in Quebec City and Montreal.

"Therefore the media regarded him as being very absent, and indeed he was -- and perhaps that didn't help him," she said.

But Jerome-Forget warned against trusting polls, noting how recent surveys during elections in Alberta and British Columbia were far off the mark.

She said perhaps Couillard's continued pro-Canada stance is strategic, particularly since support for Quebec independence is thought to be below 40 per cent.

That means 60 per cent of Quebecers are pro-Canada, she noted.

"The game is not over, believe me... We don't know what's going to happen, but certainly it's going to be interesting." 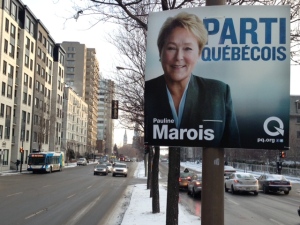