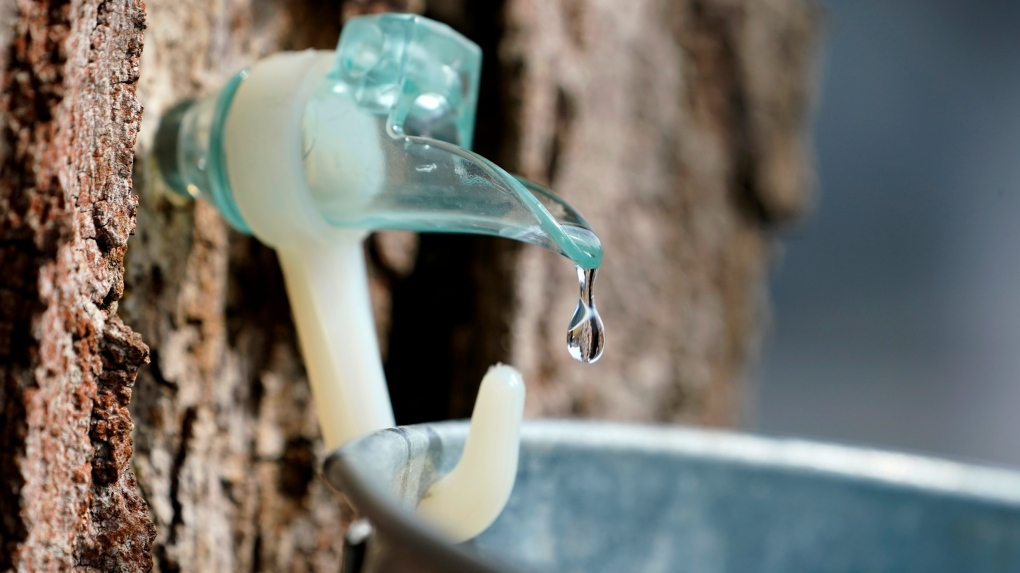 Sap flows from a maple tree that was just tapped at the Blaine House, Friday, March 11, 2022, in Augusta, Maine. Gov. Mills helped call attention to the state's annual celebration of pure Maine maple syrup and the Mainers who produce it. (AP Photo/Robert F. Bukaty)

Paul Renaud is only too aware of what the power of wind can do to trees.

After violent windstorms recently swept through southern Ontario and Quebec, uprooting trees and leaving a trail of damage across a vast territory, Renaud's thoughts went right to his sugar maples in Lanark Highlands, Ont., where storms once considered rogue now seem more frequent.

"We've had two in six months," he said in an interview. "Each one has taken out maple trees."

Worsening storms aren't the only changes Renaud sees. As chair of the climate change working group for the Ontario Maple Syrup Producers Association, he says dramatic weather is having a serious effect on his industry.

Syrup producers are recording declining yields due to increasing global temperatures, which are leading to more invasive pests, sap that is less sugary and shorter harvesting periods than the normal four-to-six-week season.

"Trees get stressed and then they are more susceptible to pests and pathogens," said Joshua Rapp, an associate at Harvard University's school of forestry.

The attacks keep coming. An infestation of tent caterpillars in 2018 left some Ontario producers with 30 per cent less syrup than the year before. The caterpillars eat the leaves, which help make the sugar, leading to less sugary saps.

With earlier and shorter tapping seasons, producers are scrambling to find workers. One third of North American producers said they missed their first sap flow of the season several years in a row, according to a 2019 survey of nearly 400 producers.

Each year between late February and early May, maple syrup producers rely on the delicate freeze-thaw cycles of spring. When nighttime temperatures drop below zero, the maple tree contracts and sap rushes up from the roots into its branches. When temperatures rise during the day, the tree's wood expands, putting pressure on the branches and forcing the sap back down the trunk and into the taps.

The sap is boiled until most of the water evaporates, leaving behind the dense, sweet liquid we know as maple syrup. It takes about 40 litres of sap to make one litre of maple syrup.

By 2100, some U.S. states could see production shift one month earlier -- and become nonexistent in some regions like Virginia. "As you go farther north, there's still a sap season but it moves earlier in the year," Rapp said in a recent interview.

The effects of changing temperatures are felt unequally. Warmer temperatures could benefit northern parts of Ontario and Quebec, which could see up to 40 litres more sap per tap each year.

"Moving it earlier in time actually makes the season better, because it lengthens the season out," Rapp said. But he warned that higher temperatures produce less sugary sap, and as a consequence, more sap is needed to make the maple syrup consumers are used to.

Meanwhile, the growth in global demand for the sweet syrup shows no sign of abating. When the balmy 2021 winter and abrupt spring thaw brought low harvests, the industry had to dip deeply into its strategic reserves to meet global demand, which rose by 23 per cent. In response, Quebec Maple Syrup Producers drained nearly half its reserve -- 23,000 tonnes worth $150 million.

The industry says keeping up with global syrup demand will require tapping 120 million more trees by 2080. That rise in consumption will add to the carbon levels in the atmosphere due to the wood or other fossil fuels burned to boil the sap.

"Eighty-five to 90 per cent of emissions that a maple syrup producer has relates to the boiling of sap," Renaud said.

In their defence, producers contend that tapping more trees protects those trees from being harvested, ensuring that the industry sequesters more carbon than it releases.

Whatever the carbon math, the growing demand for maple syrup and diminished yields are requiring producers to look for ways to mitigate the effects of climate change. For example, thinning of maple stands encourages the growth of larger crowns on the remaining trees, "and that's going to help them be healthier and produce more sap and sugar," Rapp said.

But, he acknowledges that to save the industry, "the biggest thing is addressing climate change."