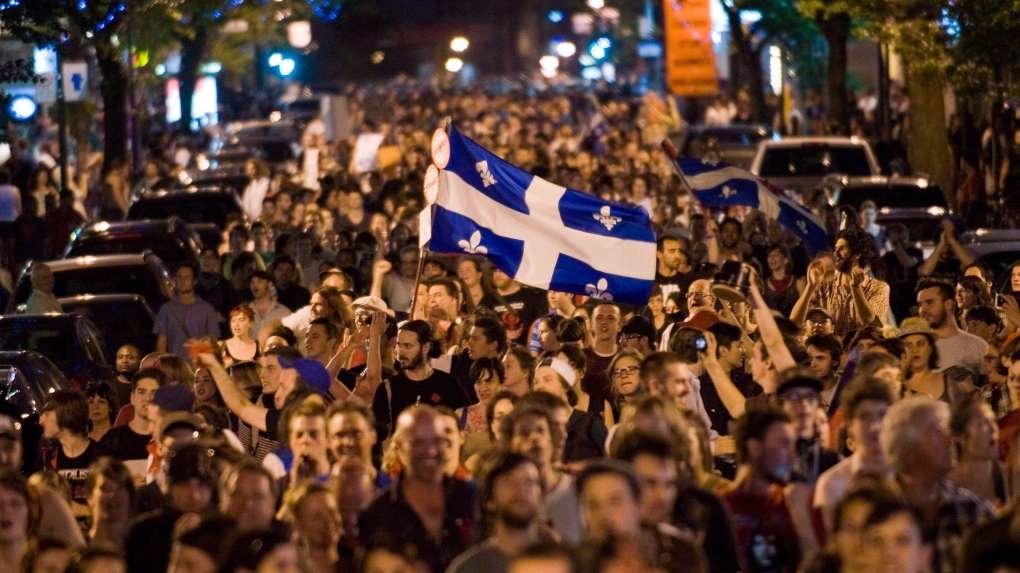 For several months, images of blockaded government offices, clashes between demonstrators and police, and the ubiquitous red square that came to symbolize the protest movement made headlines around the world.

At issue was the provincial Liberal government's plan to nearly double tuition fees over five years to $3,800 per year, which, it said, would still leave the province with some of the lowest fees in Canada.

Reacting angrily, tens of thousands of students voted to strike and walked out of their classes.

Martine Desjardins, the former president of Quebec's largest student federation, still remembers getting the phone call from a Marois staffer announcing the cancellation.

"It was the moment where I said to myself, 'we won,"' she said in a phone interview.

But while Desjardins sees the protests as an undeniable victory for the students, others have mixed feelings.

Some were disappointed the Marois government chose to allow tuition rates to rise gradually with the rate of inflation instead of reinstating a complete freeze.

And while the protests began with the narrow objective of reversing tuition hikes, for many they quickly expanded to include issues such as free education and reducing social inequality, according to a college teacher who marched with the students.

"It (wasn't) just, 'we don't want to pay more,' it's a vision of a society where education is important enough that we find the money to make it free for everybody," said College de Maisonneuve professor Julien Villeneuve, who became known as "Anarchopanda" after donning a black-and-white bear costume during the protests.

Villeneuve believes that message was partly lost, partly due to media coverage that focused on the violence.

Nevertheless, he thinks that if there was a victory, it was introducing formerly "radical" ideas such as universal free education, socialism and anti-capitalism back into mainstream public discourse.

"In the strikes we did before, (free education) was always the goal, but before 2012 we never dared to say it," he said.

Nelson, now 24, says she was disappointed the PQ decided to allow tuition to rise with the cost of inflation, rather than reinstating a total freeze.

"A lot of the campaign promises that were made weren't kept," she said in a recent interview.

"But at the same time there were many victories, in that we mobilized an entire generation of students to organize and we popularized themes of anti-capitalism, anti-austerity -- these taboo topics that you don't grow up thinking are possible."

The strikes were the product of years of meticulous preparation on the part of student leaders that dated back to 2009.

But how they came to exceed even those organizers' expectations is still a matter of debate.

Desjardins believes the government's refusal to sit down with the students played a part, as did a controversial emergency law to crack down on protests that many saw as an infringement on civil rights.

To that list, Nelson adds unusually warm weather and anger at the political class over a number of corruption scandals.

What is clear, however, is that the perfect storm of conditions that produced the demonstrations has not since been replicated.

Student leaders tried hold a new series of walkouts protesting austerity in 2015, but those never gained the momentum attained in 2012.

Nelson and Villeneuve suggest this may be because protesters are still dealing with the physical, emotional and legal fallout of 2012.

Villeneuve says the protests spawned dozens of lawsuits, including several class-actions against authorities for the mass arrest of protesters.

Other demonstrators have alleged they were injured by police who responded to their civil disobedience with disproportionate force.

These include Nelson, who says she was arrested multiple times and given more than $7,000 in fines, though she was never charged with a crime.

She has also brought legal action against the Montreal police for alleged abuse of authority and assault during subsequent protests.

"I think people are tired still," said Nelson, who is still working to finish her degree. "We all came off this strike and returned to school."

Despite the relative quiet on the streets of late, many of the activists believe the events of 2012 could happen again under the right conditions.

"Maybe, although I hope not," Desjardins said.

"Not because we didn't get any pleasure from it, but it was very demanding. I'd rather people be able to reach agreements, to negotiate."