MONTREAL -- When it comes to her ambition, skills and all-around savviness, Kyra Milan Brown is more like a nine-year-old going on 30, the adults around her agree.

“She’s amazing. She also inspires me. How does she have the confidence to just go out there and do those things?” said Loreena Gabriel, a 35-year-old family friend who’s teamed up with Brown on a project to help members of Montreal’s homeless population this winter.

The duo is collecting an assortment of warm outerwear along with toiletries and snacks to hand out to people downtown on Dec. 8 who are living on the streets.

“Because it’s closer to winter and it’s very cold here I thought it was a good idea, so we just started,” Kyra explained.

They're inviting anyone who can to drop off items like toothbrushes, toothpaste, body wash, hand cream, sanitizers, masks, snacks, reusable water bottles and warm articles of clothing like socks, hats and gloves at the following locations by Dec. 8: 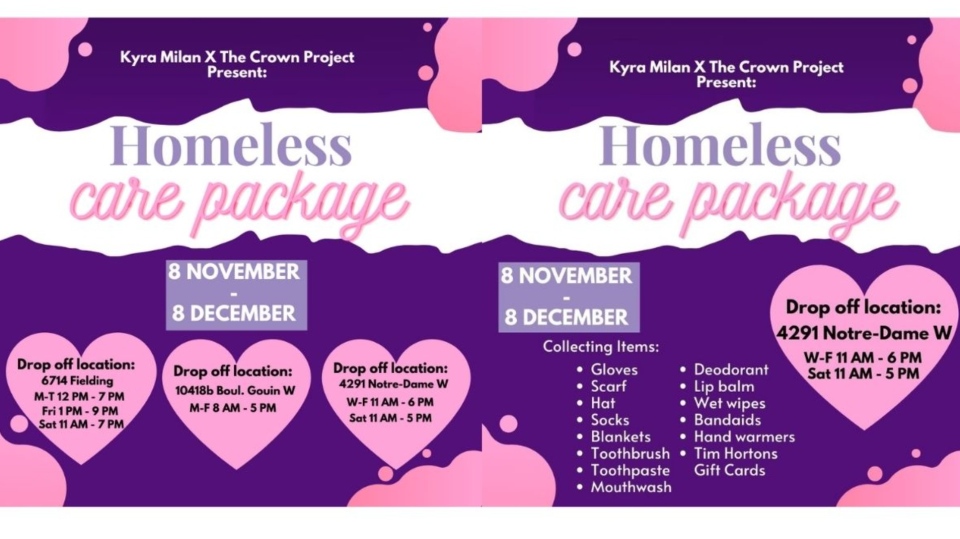 GIVING BACK RUNS IN THE FAMILY

Kyra comes by her generosity of spirit naturally. “My mom used to go to the women’s shelter and do their nails, so I got influenced because she helped people so I want to help people too,” she said.

And for the last couple of years, her family has been handing out what Kyra calls ‘kare bags’ to people they would encounter in their daily travels.

“It makes me feel good because I have this beautiful house with all this stuff inside,” the young Longueuil resident said.

“Not everybody gets to have this but it makes me feel good that I’m helping them and maybe just bringing them a step closer to having this, you know?”

The director of the Old Brewery Mission is especially impressed that Brown and Gabriel have decided to hand the gifts out themselves, saying that takes “courage,” calling them “his heroes.”

“We see too much of the exact opposite, which is people feeling scared and nervous around homeless people, stepping around them, not making eye contact,” said James Hughes.

A similar mantra has guided Gabriel for some time. She is focused on the idea of lifting others in her community, so she can change lives, break "generational cycles," her website says, and build confidence.

That led her to create The Crown Project, an organization that has held seven similar winter drives in the past, among other charitable activities.

She also opens a regular pop-up shop around graduation time that hands out free suits and dresses to help “underprivileged millennials and Gen Z” students in Montreal look and feel their best.

“It’s just something I always wanted to do - to help others. I’m not rich, I didn’t grow up rich. In high school, in grade 11, I had two jobs so I could pay for prom and graduation and stuff,” said Gabriel, who now works in public relations.

And having worked downtown, she said she was struck by the numbers of homeless people who have to live rough especially during our harsh winters months, some freezing to death.

“I know this is only a small little thing that we’re doing but hopefully it helps and hopefully more people get involved to help the homeless population,” she said.

“It’s absolutely wonderful,” said Hughes, when asked what he thought of the pair’s initiative.

“We're all part of this system of care,” said Hughes.