MONTREAL -- Belle Phillips’s stitches come as second nature. The 21-year-old sits at her kitchen counter in Kahnawake, calmly chatting about Netflix, while her fingers fly across the fabric in front of her.

She stops and looks down to pick up more beads. Each is just millimetres wide, and requires a steady hand to thread onto a needle. The work she is producing is intricate and takes hundreds of hours to complete. Flowers and vines in blue, pink and purple wind together around a single word: “community”.

Phillips is one of nearly 100 beaders participating in the Community Isolation Beadwork Challenge. Following the same pattern, each beader is encouraged to use their own inspirations and colour stories to create one work every month.

The challenge was created by Jessica Hernandez as a way to create a community feeling during the pandemic.

“I wanted to do something that would give people hope,” she said. “It helped us. It helped us through this.” 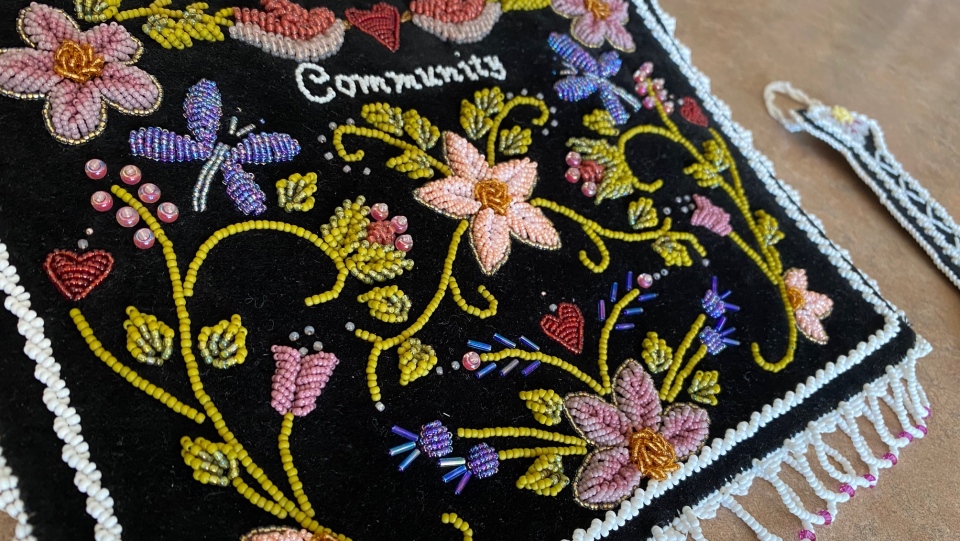 Kahnawake implemented it’s own measures to slow the spread of COVID-19. While the provincial curfew was not in effect on the territory, in January only essential businesses were open and people were encouraged to stay home. Some restrictions have loosened, but there is still a need to fight isolation.

Phillips says having something other than schoolwork to focus on helped occupy the time. “It’s a lot of stress relief and it helps me focus with school,” she said.

Eleanore Skawennase Paul spent many January nights alone. Now that she can have some visitors the time passes a little less slowly. Having a project like the beading challenge keeps her motivated. “If you’re anxious or worried about something you’re so engrossed in doing the beadwork it really does calm you,” she said.

An added benefit of the challenge is encouraging the proliferation of traditional beading. Hernandez was surprise that beaders from outside Kahnawake joined in. She received entries from as far away as Six Nations and Tyendinaga. “Our grandmothers, our great grandmothers, our ancestors.... they beaded to help put food on the table,” she said. Phillips even used some of her grandmother’s beads she found, which inspired her January creation. “My grandmother used to bead and recently I dug out all her old beads so I try to use at least one colour from her stash,” she said.

For Paul, the beading challenge also help connect her family. Her grandmother and mother both beaded, now those skills have been passed down to her great-grandchildren.

Phillips says it’s encouraging to see how each beader interprets the challenge, and how it’s connecting modern day issues with traditional art. As she uses another of her grandmother’s beads, each stitch connects a thread to the past.