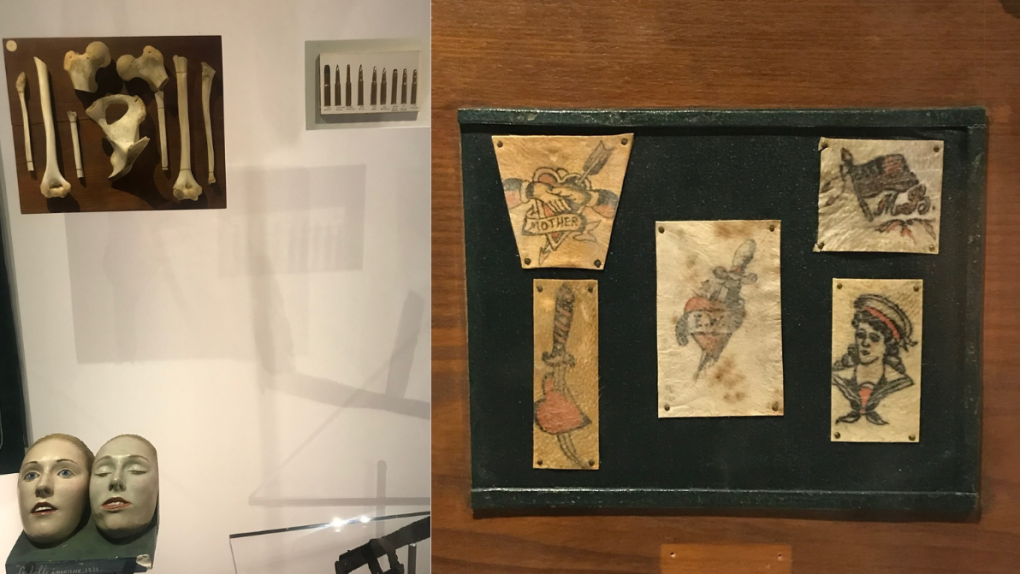 Researcher Jamie Jelinski would like to have access to the human remains at the Museum of Civilization and learn more about how they were obtained. He's filed an access request to argue his case. SOURCE: Jamie Jelinski

MONTREAL -- Historian Jamie Jelinski, after learning a piece of a murder victim's skin has been kept by Quebec for almost 100 years and was displayed in a museum, wants to know more -- but he hasn't been able to get any answers.

The skin has a tattoo on it and belonged to a poor working woman who was killed by her best friend in 1929.

Jelinski, who wrote a chapter in a book about museums' treatment of working-class people, also wants to know the bigger timeline of how people's body parts have been kept and put on display in Quebec.

But after he started asking questions about this particular exhibit, at the Museum of Civilization in Quebec City, it was removed from display and his other questions ignored, he said.

He has filed a number of access to information requests which will be argued in court over the next two months.

THE MURDER OF MILDRED BROWN

Mildred Brown died in 1929 and is buried in an unmarked grave on the Island of Montreal.

According to Jelinski's recounting of the event, Brown was bludgeoned to death with a wooden beam by her friend Doris Campbell Morrison after a spat over Brown's boyfriend Thomas Stevens.

"Millie was my best friend, but we were both drunk at the time and I did not know what I was doing," Morrison told the judge after pleading guilty to manslaughter.

The account is told in a chapter of "Museums and the Working Class."

Both Brown and Morrison's stories may have faded into obscurity, except for some ink.

Medicolegal lab director Wilfrid Derome discovered tattoos on Brown's body (in addition to abrasions from a violent assault). He then removed the tattoos from Brown's body, including one with an American flag and the initials M.B.

The piece of Brown's skin, along with the rest of Derome's extensive collection, is owned by the Ministry of Public Security and housed at the Museum of Civilization in Quebec City.

"The coroner's office maintains these body parts in perpetuity," said Jelinski, who asked public security if they had permission to keep body parts from murder victims.

"I just wanted to see what they would say, and then they said, essentially, 'We don't need these permissions because we're allowed to maintain human remains from victims in the province.'"

Jelinski added that many museums have preserved tattooed skin from the 19th and early 20th centuries, and he's never had an issue obtaining permission to inspect the remains or the documentation that accompanies them.

Often, he added, the preserved skin is from convicted criminals.

Jelinski asked, as he has done many times across Canada and globally, to visit the Quebec City museum and inspect the objects and the records to learn more about Brown's skin.

"They wouldn't let me do that," said Jelinski, who booked a train ticket for Quebec City to check out the exhibit behind glass but not up close.

Jelinski wanted to inspect the objects more deeply with a magnifying glass and look at notebooks that detail how the human body parts got from the living person to the museum's wall.

The museum said no, which piqued his curiosity. Shortly after, the display was removed.

Jelinski will have the first of several access to information hearings May 11, where he will argue his case to see not only Brown's tattoo, but more about Derome, who, Jelinski has learned, amassed a large collection of human remains.

"He amassed dozens of human remains," he said. "These tattoos [were] included, but also lots of skulls, tons of bones, internal organs, and then there's also parts of men's and women's reproductive systems."

Museum media relations officer Agnes Dufour declined to comment, saying that with the upcoming freedom of information process, "representatives of the Museum are called as witnesses during the hearings before the Commission d’accès à l'information du Québec regarding this collection."

What Jelinski wants is a chronology of how those remains wound up on a wall behind glass. Where did they come from? Who did they belong to? How did the museum get them?

"When I started asking those questions, that's when I started to encounter some pushback and I wasn't really getting the answers I wanted or getting answers at all," he said.

"I'm not opposed entirely to having these tattoos on public display. What I'm opposed to is when the coinciding textual documentation doesn't give an accurate description of how they were acquired in the first place."

He suspected, he said, that it ws those questions that set off a reaction, and that he was starting to "get close to how these actually were obtained."

Dr. Wilfrid Derome (1877-1931) was a ballistics expert and his work was considered groundbreaking in the field of forensics. He appeared in court as an expert in a number of famous murder trials of the 1920s.

According to biographer Jacques Cote, he fought all his life to have forensic expertise recognized in the courts.

His Laboratoire Provincial de Recherches Medicolegales was the first of its kind, and included a library and museum.

The Surete du Quebec (SQ) headquarters in Montreal has a Wilfrid-Derome wing on Parthenais St. honouring the man.

His collection has been viewed and loaned out in the past, and there was a 27-minute video on the museum's site takes viewers on a tour of the exhibit, including the pieces of skin.

(The video was removed from the museum's site and YouTube after CTV published this piece).

Jelinski wonders why, then, he is not being allowed to inspect them.

"These are understood as objects of historical importance and historical archival material at museums," he said.

"Once they're there, that's like a recognition that they have value to the public and to researchers, but they are not allowing me to view this material, despite granting other people who are writing narratives favourable to them to access them."

If, Jelinski added, the museum had let him inspect Brown's tattoo and documentation accompanying it, the story would have ended there.

"That would have been probably the end of this because I was just interested in the tattoos but then in denying me access, I had to do research in another way, so I looked more widely and that's when I discovered what was really going on," said Jelinski.