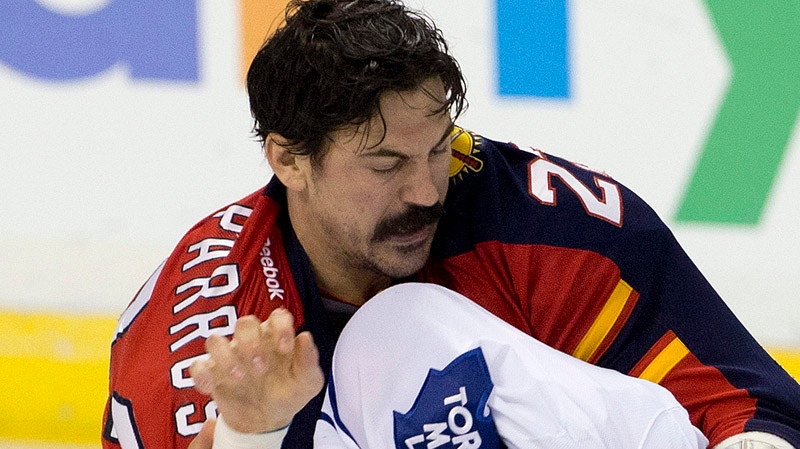 The Habs have a new heavyweight enforcer in the form of 33-year-old Florida Panther George Parros.

The Canadiens announced Friday afternon that they had bagged Parros by trading Philippe Lefebvre and Florida's seventh round draft pick in 2014, which the Habs acquired a few weeks ago.

Parros, easily recognizable for his large frame and trademark throwback moustache, notched one goal and one assist in 39 games for the Florida Panthers in the 2013 season, averaging 6:36 of ice time per game.

"i was surprised to be traded, I didn't see it coming," he said on a confernece call from his home in California.

Parros said that he immediately contacted his new and former teammate in Anaheim Travis Moen. "He was as happy as I was that we're treammates again," said Parros who stands 6'5" and weighs 228 and has spent 1,007 minutes in NHL penalty boxes.

While some suspect that hockey fighters might mellow out with age, such as in the case of George Laraque, whose fighting days were behind him when he joined the Habs in 2008, Parros insisted that he is ready to keep serving up knuckle sandwiches to opposition bullies.

"I've never feared anybody and that won't change. I'll do whatever necessary to create space for my teammates, as I've always done. Fighting is part of my game but I hope to contribute in other ways as well," said Parros, who will earn $950,000 next season, the last remaining on his contract.

Parros was born in Washington, Pennsylvania and has played with the Los Angeles Kings, Colorado Avalanche, Anahaeim Ducks and Panthers.

Bergevin, as he has a habit of doing, praised the "character" of his new player.

He also hinted that there could be more transactions over the upcoming days.

Lefebvre, for his part, signed as a free agent with the Habs in 2009 and notced seven points in 23 games for the AHL Hamilton Bulldogs last season.

In other Habs news, Swiss defenceman Yannick Weber, who never managed to grab a full-time spot in the lineup, signed with the Vancouver Canucks for $650,000 per year. Weber scored 32 points in 115 games with the Canadiens since his NHL debut in 2008.