Gretta Chambers, a prominent journalist and the first female chancellor of McGill University, passed away Saturday morning at the age of 90 at St. Mary's hospital in Montreal.

Chambers, who was born in Montreal in 1927, earned a degree in political science from McGill in 1947.

She went on to marry Egan Chambers, who later became a Member of Parliament and died in 1994.

Her first foray into journalism was as a translator of books and political treatises.

Chambers hosted a weekly radio show on CBC, The Province in Print, from 1966 to 1978 and also hosted of a weekly public affairs show, The Editors, on CFCF 12 from 1977-1980. Over the years she contributed to various television and radio broadcasts as a political commentator, including for CJAD, CBC and Radio-Canada, and wrote a weekly column for The Montreal Gazette.

She was one of the first Anglophone journalists to write extensively about French-speaking Quebec.

In 1991 she broke the glass ceiling to become the first female chancellor of McGill University, a position she held until 1999. She also served on McGill's Board of Governors from 1978 - 1988 and was actively involved in the Montreal Consortium for Human Rights Advocacy Training at McGill.

A teacher and advocate for education, she started the advisory committee on English language education in Quebec.

"She will certainly be remembered as a pioneer in terms of her views on education," said Sylvia Martin-Laforge, head of the Quebec Community Groups Network. "A pioneer as a woman with influence and vision and power. She was a role model. She'll be remembered as a very special lady - une grande dame."

Martin-Laforge said she'll remember Chambers' feistiness and said she didn't easily take no for an answer. 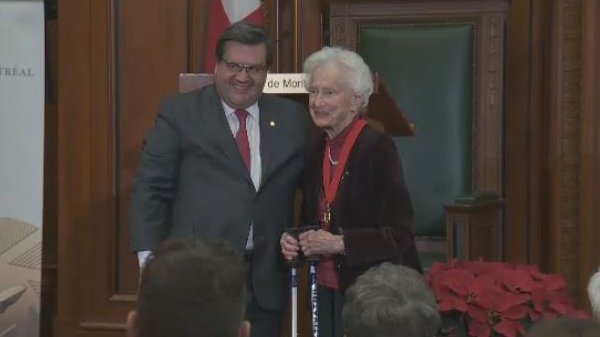 Chambers receiving the Order of Montreal in 2016.

Chambers' son Geoffrey Chambers is glad people are remembering his mother as a bridge builder between the two solitudes in Quebec.

Her son also described his mother as a woman who was extremely active and engaged in both her family and the community, who always had projects on the go. He said she always wanted to help other people realize their potential.

"She was active in trying to help find a reasonable balance between the needs to protect the French language and the preservation of the English speaking community of Quebec and she undertook a serious study on the issue of access to English schools," recalled family friend Michael Goldbloom, Co-chair for The McGIll Institute for the Study of Canada.

“She and her husband Egan chambers used to have the best Christmas parties in Montreal because they really did bring together people who didn’t naturally have an opportunity to come together and meet,” he said.

Chambers received numerous honours and awards during her lifetime, including being named an Officer of the Ordre National du Quebec in 1993, and was named a Member of the Order of Canada in 1994 – to which she was later promoted to Companion in 2000.

In a statement, McGill principal and vice-chancellor Suzanne Fortier extended her condolences to Chambers’ family on behalf of McGill University.

“Gretta was an unfailing supporter of her alma mater, from which she received a Bachelor’s degree in 1947,” Fortier wrote. “It was always a special joy to recognize her at our Convocation ceremonies, which she attended loyally to celebrate the accomplishments of our students. As a journalist and political commentator, and as a significant figure in the life of her community and her institution, Gretta brought insight, wit and wisdom to the various roles she played. We will deeply miss her presence on campus but she will forever remain in our hearts.”

A funeral service will be held at 11 a.m. Saturday at the Church of St. Leon de Westmount.

She is survived by her brother, prominent philosopher Charles Taylor, five children, and eight grandchildren.