Google Canada celebrated one of Quebec's seminal artists of the 20th century Saturday in its Doodle featuring and image inspired by painter and stained glass artist Marcelle Ferron.

The artist, who was born in Louiseville, Que., and died in 2001 in Montreal, was an early member of the Automatistes art movement, and vital part of the Quebec cultural scene in the middle of the 20th century.

Google chose today to honour Ferron, as it's the anniversary of her installation being unvieled at the Vendome Metro station in 1981. One of Ferron's stained-glass windows was also installed at the Champ-de-Mars metro station. 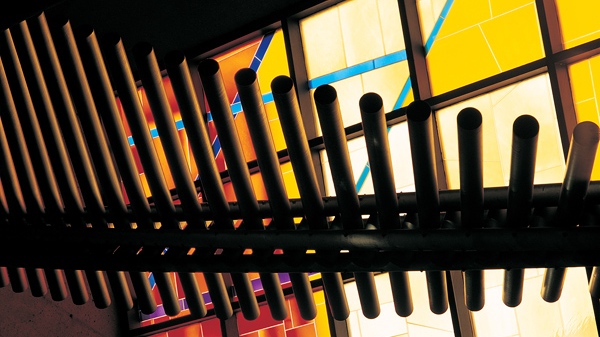 "In the world of public art, it's probably one of the biggest in Montreal," said Galerie Simon Blais owner Francois Babineau. "She was well-known for very gestural painting, using lots of colours on the pallet, so it's often pallett knives that could be a foot long."

Les Automatistes were a group of dissident Quebec artists founded in the early 1940s that were influenced by surrealism and automatism.

Klein said Doodle team members decide each year which topics to celebrate with a Doodle from a variety of sources including Google users from around the world.

"Overall, the Doodle selection process aims to celebrate a diverse mix of topics that reflect Google's personality, teach people something new, and, most importantly, are meaningful to local culture," said Klein.

Ferron was awarded the Paul-Emile-Borduas prize for the visual arts in 1983 and was knighted by the National Order of Quebec in 1985.