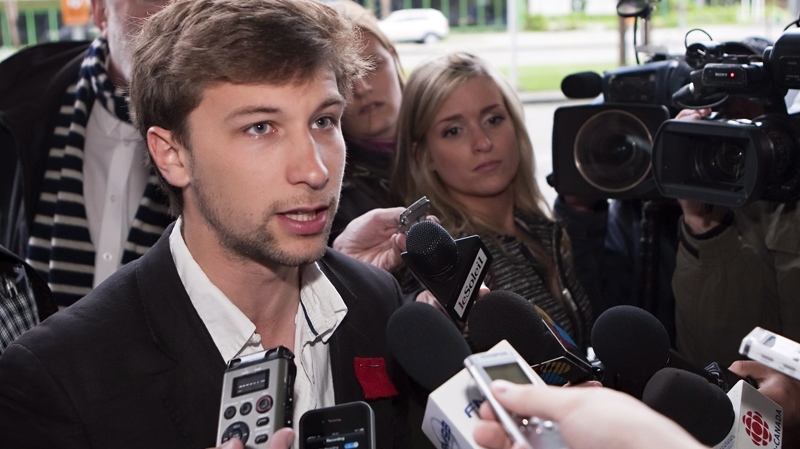 MONTREAL—The face of Quebec’s student uprising was found guilty of contempt of court on Thursday, when Justice Denis Jacques ruled that Gabriel Nadeau-Dubois had incited protesters to ignore court orders.

The spokesman for the student coalition CLASSE, Nadeau-Dubois faces a year in prison and a $50,000 fine.

During the student movement that rocked Quebec in the spring, some students sought and were granted injunctions banning demonstrations from interfering with their classes.

On Thursday, Jacques ruled that Nadeau-Dubois encouraged protesters to violate those injunctions with statements he made during an interview with Radio-Canada on May 13, 2012.

“I think that it is completely legitimate for students to undertake the means necessary to respect the democratic choice to strike,” Nadeau-Dubois told the interviewer. “It’s completely regrettable that a minority of students are using the courts to go around decisions that were made collectively.

“If students need to form picket lines to ensure that their strike votes are respected, we think that’s a completely legitimate.”

University of Laval student Jean-Francois Morasse, who had won an injunction, filed the complaint against Nadeau-Dubois following that interview.

Nadeau-Dubois was often criticized for not speaking out strongly enough against the violent actions taken by some protesters. During the course of the trial, he kept quiet.

For his part Nadeau-Dubois contended he was not a student leader, just a spokesman for an umbrella group that at one point counted over 200,000 students. As such, Nadeau-Dubois argued he had no power to stop violence.

Jacques disagreed that Nadeau-Dubois was not a leader and ruled that he should have encouraged people to respect the law.

Nadeau-Dubois is expected to respond to the verdict on Friday morning. Sentencing arguments will be made on Nov. 9, 2012.

A copy of the judge's decision